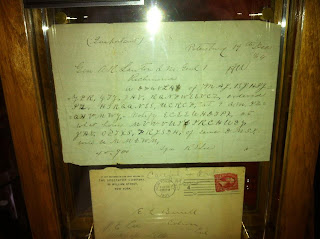 ROBERT E. LEE AND JESUS?!
One of the neatest and most exciting discoveries I came across, was in a glass case of JParsons, a New York-theme store, which is packed with amazing treasures and collectibles. This one (seen above in my photo) is an encrypted message by the great Civil War General Robert E. Lee.


By the hand of fate, Lee, one of the Union's best soldiers before the Civil War, ended up defending the South in the War which almost destroyed America. Among other things, this war was about Slavery and Emancipation, which as we know, occurred when Lincoln famously ended slavery.


What most people don't know is that General Lee also opposed slavery, and was a devout man of Christ! Lee inherited slaves from his late wife's estate and immediately freed them all!! His most faithful friend was William Mac Lee, one of those former slaves and Lee's closest friend DURING the Civil War (as well as his cook)!


William Lee said of General Lee "I was raised by one of the greatest men in the world. There was never one born of a woman than General Robert E. Lee"


Both men - both Lees- are nowhere in the stature of the first man about whom this was said - JOHN THE BAPTIST. But while praying and reading the Word this morning, the Lord clearly brought to mind, the following scriptures to me from Hebrews:
Long ago, at many times and in many ways, God spoke to our fathers by the prophets, but in these last days he has spoken to us by his Son, whom he appointed the heir of all things, through whom also he created the world. He is the radiance of the glory of God and the exact imprint of his nature, and he upholds the universe by the word of his power. After making purification for sins, he sat down at the right hand of the Majesty on high, having become as much superior to angels as the name he has inherited is more excellent than theirs.
For to which of the angels did God ever say,
“You are my Son,
today I have begotten you”?
Or again,
“I will be to him a father,
and he shall be to me a son”?
(Hebrews 1:1-5 ESV)
(Emphasis mine)


Some things to note this morning about this photo of the Civil War message from General Lee, which makes no sense to the untrained eye, in comparison to the Word of God:


Unless you know the man who wrote the encoded note above and how he operates, you will never get this message! The same with God and our Savior Jesus Christ! Unless you know Him personally as the Lord of your life and His Word and how HE operates, there is no hope of Heaven!


The question is, now that we have clearly decoded what God has said in Hebrews 1: 1-5 here, what are we going to do with that information?! Clearly, we shall accept it as Truth confirmed by God, Who has note written anything in code or numbers, but spoken as plain as day from Genesis all the way to the End of the Book.


Are you ready to accept this truth? Robert E. Lee was a man of prayer and grace and the Lord Jesus. No matter what the politics and history will say, he knew Christ and Christ knew him. Forget politics and all that noise - DO YOU KNOW CHRIST...and the Glory of His Name?