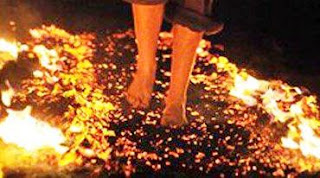 Something is terribly wrong in this country.
In the past five days, we have had the following:
- A tragic massacre at a movie theater in Aurora, Colorado with 12 murdered by a sick young man (Thursday).
- A 24 year old Chicago woman, Tonya Reaves, died immediately after an abortion at Planned Parenthood in Chicago (Friday).
- Twenty one people at 'motivational' speaker Tony Robbins' UNLEASH THE POWER WITHIN weekend ended up with 2nd and 3rd Degree burns after walking on 12 lanes of hot coals, in a freakish event called "Firewalk Experience" (Thursday).
- There were more weekend fatal shootings in Chicago, the homicide capitol of the United States.
-  Fred Willard, a popular 72 year old TV favorite, was arrested inside of a California porno theater for immoral conduct.

If you look the larger picture, it is obvious that our national soul is in need of rejuvenation and healing. While the secular press has given almost no play or indepth investigation to the death at Chicago's Planned Parenthood, by simply calling it an accident and leaving it at that, God is taking notes! There seems to be absolutely no concern by the elite media for the poor woman whose life, along with her baby, were lost in that place!

But what is really stupid is this "FIREWALK EXPERIENCE"! Where is this commanded by God? As He said in the Old Testament when criticizing and judging those who had pass their children through the fire, in worship to the pagan gods of Molech and Baal - "this (practice) never entered My Mind (Jeremiah 32:35).

Robbins' website includes this madness in his latest speaking tour called "UNLEASH THE POWER WITHIN" - a four day weekend which costs between $995 and $2595 to attend! Like most fading celebrities, they always seem to have to come up with something more outrageous than the last time, in order to stay in the public eye.  The title alone should give us pause. Unlike Biblical Christianity, where we know our Power is not from inside our narcissist self, but from God Above, Robbins and his ilk - from Deepak Chopra to Joel Osteen - teach that all our success comes from primarily, looking inside of ourselves.

You and I know that the heart is exceedingly sinful. I want nothing from what I think to define my success and happiness in life. I know the sin and potential to sin inside of me, and it is a scary thing when measured up against the Holiness and the Word of God! Even though I am signed, sealed and delivered for Heaven by the Holy Spirit Who I can testify to, as living in me, I am still a sinner saved by Grace. I must still wave my right to satisfy the flesh by pressing in through prayer, the Word and walking in the Light. I don't need some unsaved, unredeemed loudmouth speaker telling me that the answers to life is inside of me when Christ is the ONLY answer!

If you look at the majority or all of the people who endorse Tony Robbins, none of them are Bible believing teaching speakers or Christians. Click here to read. We don't need to expound on all of these events listed above to know how horrible they are. All we need to know, as secular lawyers start ramping up for those 21 people burned at the Tony Robbins Walk of Fire, is that there is a way for America (and ALL people worldwide) to avoid the fire that burns forever, in the next life - and that is TURN BACK TO GOD!!!

Bernie the Culture of Darkness is surrounding us. Satan has his hand everywhere. If you read about the emergency room visits that night all you could hear was screams of terror. Hell in the ER
God Bless!!

Amen to that Pastor Michael! The coals were up to 2000 degrees, no wonder they got 3rd degree burns. It looks like almost a trial run for Gehenna, brother. Do these people know what they're doing...and how long Eternity is??!! Oy vey! Yet, they thumb their noses at Holy God...I don't get it, brother!