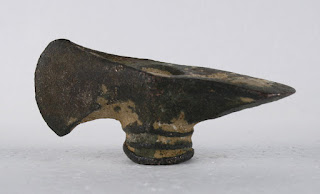 1 Now the sons of the prophets said to Elisha, "See, the place where we dwell under your charge is too small for us. 2 Let us go to the Jordan and each of us get there a log, and let us make a place for us to dwell there." And he answered, "Go." 3 Then one of them said, "Be pleased to go with your servants." And he answered, "I will go." 4 So he went with them. And when they came to the Jordan, they cut down trees. 5 But as one was felling a log, his axe head fell into the water, and he cried out, "Alas, my master! It was borrowed." 6 Then the man of God said, "Where did it fall?" When he showed him the place, he cut off a stick and threw it in there and made the iron float. 7 And he said, "Take it up." So he reached out his hand and took it. (2 Kings 6:1-7)

Elisha was quite the prophet and man of God. As the successor to the great Elijah, who was taken up to Heaven in Chariots of Fire, he appeared to do even more miracles than his master. The key was - he did it in the Power and Strength of the Lord.

Here we have the situation where the heavy piece of an ax made of iron (similar to the picture above) fell into the water and sank. But look at what Verse 6 says "THEN, the MAN OF GOD"....this is qualification. This is the day when iron floated to the top. This is the day when something impossible materialized.

In your life this morning...a life of which we are completely on borrowed time from the Keeper of Time - God the Father - do you have a sinking feeling of things just heading for the bottom?
Do you have feeling of powerlessness as you watch it happen?
Do you wish someone or "some thing" would just stir up the water enough so that you can at least - if not swim further down the road - that you would stay afloat?

Well all of this is possible, if the Spirit of God so indwells you that you can say "(where did it fall (verse 6)! If you are so walking in the Light of the Lord that He has top billing on your marquee, you too can cut off that stick, throw it into the water and make iron float! It is not going to be easy, but He really has given us that capacity! Yes, He did...and still does - if you and I seek His forgiveness, repent, turn away from our inner sinful self...and instead TURN TO HIM! If we accept, trust and recognize that He alone is Lord, we too can walk daily without that 'sinking feeling'. Listen to what the Scripture promises and says about us who are saved and being saved....and this is the thought to hang your hat on, in this day of Drought and Despair:
"But as many as received Him, to them gave He power to become the sons of God, even to them that believe on His name" (John 1:12 KJV)
Posted by The Bernie Lutchman Blog at 7/25/2012