Part 1
Ephesians 6:12 AMP: "For we are not wrestling with flesh and blood [contending only with physical opponents], but against the despotisms, against the powers, against [the master spirits who are] the world rulers of this present darkness, against the spirit forces of wickedness in the heavenly (supernatural) sphere" 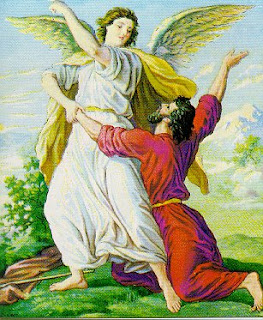 This is a very difficult verse for many to comprehend, since most people don't believe things they cannot see...you know...like Doubting Thomas! But whether they believe it or not, we are in a war and its real! One way Satan has not only deceived, but defeated a lot of the Body of Believers (in Christ, of course) is to have them believe that he - Satan - does not exist. Just like the first lie in Genesis 3 (sure, you will not die, he told Eve), most of humanity has bought this one as well.
Any Christian, who was in the Light of God, knows he/she is in a battle daily for the heart and mind! You see it even while praying and a stupid thought comes into your head, even a filthy one. This is meant to distract you from your worship and communication with the One True and Living God. For the next few devotionals, we will examine this War closely.
Today - "wrestling". When the Apostle Paul wrote this letter to the Ephesians, he know his audience very well - they loved combat and contact sports. Back in the day, there was what we would call today  - a multi level gynmasium where this type of sport including wrestling would occur. It was called the Palaestrum.
Paul was relating to them here, because the word for "wrestling" ...(with flesh and blood...or as the Amplified bible says..contending not only with physical opponents) comes from the Greek word "pale"...which comes from palestra which gives us Palestrum - the combat sports arena! See how that works!

So we are always in a struggle, a wrestling match if you will! Remember Jacob(Israel) as he contended and struggled and wrestled with the Angel of God all night. That Angel was the Lord Jesus Christ! Similarly, when we are saved and are being sanctified, we are immediately into another kind of struggle...and this fight last a lifetime. Two competing forces are fighting for our attention and loyalty.
The question remains - are we going to be loyal to the Lord Jesus Christ and follow Him fully as His Disciple or are we going to let Satan rob us of our blessings? I report, you decide!