AMERICA UNDER JUDGMENT - IN GOD'S COURTROOM! 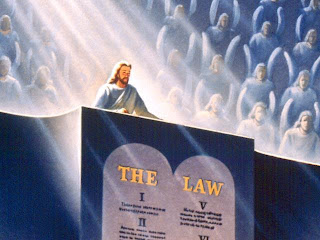 "Then I saw a great white throne and Him who sat upon it, from whose presence earth and heaven fled away, and no place was found for them"...Revelation 20:11

The United States Supreme Court has been at the center of enforced erosion of the moral and spiritual center for decades now. From former Ku Klux Klan bigot-turned liberal Hugo Black to the current Justice Anthony Kennedy, there has been a wholesale removal of God from the public life - never mind the violation of the First Amendment rights of the average citizen. To men like Hugo Black and his "wall of separation of Church and state", the religious liberties and rights of the ordinary citizen is meaningless when compared to their moral and intellectual self-righteousness and superiority.

The former KKK member/Supreme Court Judge Hugo Black, who hated Catholics as much as he hated God, wrote the majority opinion in 1947 in the case of Everson vs Board of Education which stopped the use of local public funds for the transport of children, via school buses, to local religious schools. It was not just the decision but the vitriol he aimed at the taxpayers, who now could not have their kids bused along with public school children.

Then in 1962, the same thorn in the side of God - Hugo Black, wrote the same kind of majority opinion in Engel vs Vitale Case when by a majority if 6-1 (which included Supreme Court justices like the Kennedys of that day - Earl Warren) threw God and prayer out of schools. Black's majority opinion was just as contrived as that letter by Jefferson to the Danbury Baptists which started all this fake "Separation of church and state"  stuff.

One year later, the same Earl Warren Supreme Court removed the Bible from Schools. Fast forward to exactly 10 years later and in 1973, Justice Harry Blackmun, whose name will forever live in infamy (like Black), wrote the majority opinion on Roe vs Wade. We have had over 55 million American babies aborted since and counting. The premise of the right to an abortion was found in a made up thing which did not exist in the real constitution, i.e. "emanations from the penumbra".....typical liberal-speak.

Exactly forty years later, in a biting deviation from the Word of God, another supreme court judge - Kennedy - invalidated 6000 years of civilization. By his majority 5-4 liberal decision, he virtually created a right to same-sex marriage which will reveberate throughout society and damage the First Amendment, religious liberty and more. Just like Roe vs Wade, these pontificating people could care less about the moral fabric and its effect on children.

When these judges removed God from the public schools starting in 1947 to this last shot across the bow by Kennedy, they also removed His Morality. We see the decline in education, the culture and the family. It did not start overnight, and it had a lot of  help from politicians and judicial activism.

This is just the start of an assault of religious freedom by the Court.  More cases will be coming up before it and they involve the healthcare mandate on religious hospitals and employers. These institutions are being told to provide contraceptives and abortion pills as part of their health care packages to employees (re:health care reform). So far lower courts have only upheld religious freedom of these individuals on a sporadic basis. Therefore, the First Amendment will be on trial again before the US Supreme Court where it may or may not stand a chance.

However, the US Supreme Court is not the only supreme mess out there. The entire infrastructure of America has crumbled, and we see it collapsing like a house of cards almost daily. Here is what we can take from this - days are coming, declares the Lord, when True Justice will be served. God's Justice will not be just for matter like these, but all the transgressions against His Holiness since the beginning of time. The Holy God of Heaven, Whom these people (and all who have sinned and NOT accepted Christ as Lord and Savior) will face on Judgment Day will be using the same Law against them that He put in every human heart, since Creation. Whether the Lost believe in God or not does not matter. They will stand accused and completely guilty on that day.

Two things are to be taken away from the following passage in Revelation, which should give hope to all persecuted saints of God - whether they are persecuted in Iran or Nigeria or increasingly here in the US. These two things are one - nothing has escaped God and two, the books will be open with Jesus Christ the Righteous Supreme Judge of the Universe holding court. With Him in charge, all will be cleaned up and supreme justice will be served.

Then I saw a great white throne and Him who sat on it, from whose face the earth and the heaven fled away. And there was found no place for them.  And I saw the dead, small and great, standing before God, and books were opened. And another book was opened, which is the Book of Life. And the dead were judged according to their works, by the things which were written in the books. The sea gave up the dead who were in it, and Death and Hades delivered up the dead who were in them. And they were judged, each one according to his works. Then Death and Hades were cast into the lake of fire. This is the second death. And anyone not found written in the Book of Life was cast into the lake of fire.

All of this is horrible stuff. Still, even the vilest sinner - from the highest to the lowliest person in the world, can have their sins forgiven, be made new and be set free and saved by the Spirit of God. All any person has to do is cry out to the Lord, ask His forgiveness for our sins and then accept the finished work on the Cross. If it can happen to "Roe" (Norma McCorvey) of Roe vs Wade, the Apostle Paul or you and I, salvation can come to anyone.

NEXT: "HOW THE CHURCH BLEW IT"