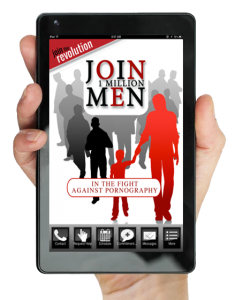 Some of the most powerful life changing tools are coming out of the inspired hearts and minds and souls of some really young church/ministry leaders. There is one in particular, that will have immediate impact on families is called "One Million Men Porn Free". The initiative was launched at this week's Annual Southern Baptist Convention in Houston by Pastor Jay Dennis of First Baptist Church at the Mall in Lakeland, Florida. This could have the staying power and influence of the One Million Mom's organization which has been growing steadily since taking on JCPenney in 2012, (over the latter's ill-fated anti-traditional family marketing agenda which almost bankrupted Penney's)!

Pornography has become so prevalent in today's corrupt society that a 6 year old with his teenage brother's smartphone can access readily available disgusting materials, that can scar their souls for life. The increasing use and acceptance of not just pornographic movies on mainstream cable channels (in some network TV) are desensitizing many church-goers. Increasingly, it is not just men who are becoming addicted! The worldwide phenomenon "Fifty Shades of Grey" erotic books were written specifically for women have hit 100 million copies sold in one year and set to outpace the equally spiritually-decadent Harry Potter which took 16 years to sell 450 million copies! They are even making a movie of Fifty Shades, to further corrupt young stay at home moms and others!

That being said, pornography is still a major problem for men and specifically men inside the church. It is a huge problem for church leaders to handle in this Laodecian age where difficult issues are pushed aside in order to not offend people in the pews. For some reason, many modern church leaders would rather risk offending God rather than lose some members, and keep our Father in Heaven happy! The reason some of these men may be loath to attack this problem is they themselves, may be involved in some form of immorality! If you don't think immorality is a huge problem, look at this what happened in the most influential mega-church in Richmond, Virginia, where four of the five pastors were just forced to resign over sexual issues. The conservative Sovereign Grace Ministries, where some solid men like CJ Mahaney and Joshua Harris preach, is under a cloud for covering up sexual abuse...and on and on.

When you apply these modern "truths" to users of pornography in the church, we see a serious problem here.  The corroding effect on the soul, where the desires of the flesh are now placed over the hunger and thirst for the Righteousness of God, is rotting the Body of Christ from the inside out! Church members who use pornography, are more apt to condone premarital sex, adultery, "shacking up"....and like Seinfield, they see "nothing wrong with that (homosexuality, which then leads to gay "marriage" etc.). We don't need persecutors to infiltrate and destroy the church - we are doing a really good job doing this ourselves!


GOD BLESS AMERICA AND HIS PEOPLE!