FEAR OR FAITH - YOU MAKE THE CALL 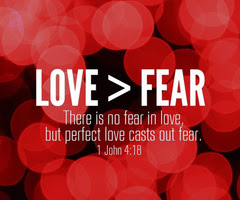 Fear is the absence of Faith. Fear does not mean you are not a believer. But let's face it, it does mean you don't believe God in this particular circumstance. You may even think He has left you on your own at this particular time! Again, this is the tendency of the natural man/woman.

How many times, from the front of the Bible to the back of the Book, has God said "Fear not....!" FEAR NOT or some variation thereof. There is no more all encompassing promise from Father than what God said in Joshua 1:9 - "Have I not commanded you? Be strong and of good courage; do not be afraid, nor be dismayed, for the Lord your God is with you wherever you go.”

Even Christians would say something like "well sure, Joshua is God's General and leader of the Israelites!" That is true. But time and again, we are told and know instinctively (if you're a child of God") that the Bible was given for our instruction. We either believe it is "God-breathed" or it is a book of fairy tales!  The choice is yours. But remember that if you and I make the wrong choice, the blessings are short-circuited!

If a nominal Christian would not accept the Old Testament word to Joshua above, how about the Word of Jesus in the New Testament? The most literal English Translations of the Bible are the New American Standard (NAS) and the English Standard Version (ESV). I use the ESV in my writings because it flows better. The New King James Version (NKJV) is closer to these two, than the perennial standard - the King James Bible. Depending on your preference in reading/study, the variations of "fear not" to "do not be afraid" to "do not fear" range from 129 in the NKJV to 127 times in the NAS to 137 in the ESV!

There are things you should fear in this life. It is normal to be afraid for our children's and grandchildren's future in the current American system, which is rapidly in decline. America and the World's best days are not ahead of us, unless everybody in the world has been born again and saved from their sin by the Lord Jesus Christ. For the majority of mankind, it is over...and they just don't know it yet! It is normal to worry about our kids lifetime Journey with Jesus; their provision, protection and careers. That would be classified as parental concern. However, the one thing all mankind should concern ourselves with is what Jesus says in our final passage today. Look at verse 28 in BLUE:

26 “So have no fear of them, for nothing is covered that will not be revealed, or hidden that will not be known. 27 What I tell you in the dark, say in the light, and what you hear whispered, proclaim on the housetops. 28 And do not fear those who kill the body but cannot kill the soul. Rather fear him who can destroy both soul and body in hell. 29 Are not two sparrows sold for a penny? And not one of them will fall to the ground apart from your Father. 30 But even the hairs of your head are all numbered. 31 Fear not, therefore; you are of more value than many sparrows. 32 So everyone who acknowledges me before men, I also will acknowledge before my Father who is in heaven, 33 but whoever denies me before men, I also will deny before my Father who is in heaven.

In the final analysis, the choice is ours. We are told to "FEAR GOD",because this it the beginning of Wisdom. The wise person will Fear God and Keep His Commandments. The wise person who does that, is not necessarily the one whom the world adores in its corrupt state. This one "FEAR" that is sound and Biblical. The majority of mankind is destined for fiery judgment because they have absolutely NO fear or respect or awe of the Holy One Who lives forever.  This "Fear" is non-negotiable if you and I call ourselves a child of God.

What we have control over is whether to take Jesus at His Word. We can count how many times this word or that or this promise or that is in the Bible, but if we don't believe it, it  is meaningless...a chasing after the wind. So what do you say? Jesus said in verse 31 above:  31 Fear not, therefore; you are of more value than many sparrows.