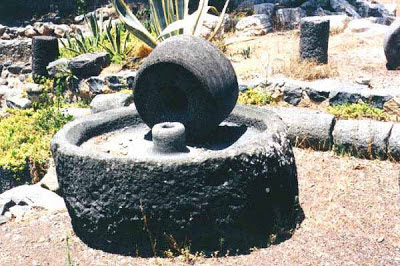 The Collins English  World Dictionary describes a Millstone as  a pair of heavy flat disc-shaped stones that rotate against each other to grind grain. It was used for thousands of years until the modern day of grinding wheat etc into flour. A millstone is also "a heavy burden". It is something that weighs or crushes a person down - as in the saying "his credit card debt was like a millstone around his neck". The implication of such a statement is that the crushing weight of such a heavy debt is so intense that it takes a person down further, and you never get rid of it!

This is exactly what Jesus meant when he said in Mark 9:42 that “Whoever causes one of these little ones who believe in Me to sin, it would be better for him if a great millstone were hung around his neck and he were thrown into the sea"! In the original language, here is what Jesus LITERALLY and FEARFULLY to those who practise this evil, said "THOSE WHO OFFEND AND CAUSE SHOCK TO THE SMALLEST OF THOSE WITH WHOM I HAVE BEEN ENTRUSTED, IT WOULD BE BETTER FOR THAT PERSON IF HE/SHE WERE FITTED FOR THE BOTTOM PART OF THAT MILLSTONE (SEE THE BOTTOM HALF OF THE PHOTO ABOVE)....AND THEN THAT PERSON WERE DROPPED INTO THE SEA!"

If anyone think this is a picnic, they are sadly mistaken. This is the FIERCE WRATH of the CREATOR OF ALL THINGS, THE COMMANDER IN CHIEF OF HEAVEN'S ARMIES, THE REAL BOSS OF THE CLIMATE AND THE CHIEF JUSTICE OF ETERNITY AND THE EXECUTIONER. Yet, evil people continue to pollute this country with filth and degradation, ad nauseum. It does not matter if it is Victoria's Secret marketing inappropriate underwear to little children or Abercombie and Fitch's catalogs or MTV or NBC TV or....any number of music, movies or books.

Now we have people in government saying children from 15 years old can buy an abortion pill over the counter - the same kids who cannot take a Tylenol to school...or in some cases a Bible. Now some liberal politicians in the Illinois State House have rushed a Sex Education mandate through the Illinois House into the Senate to force some of the most vile sex teaching upon kids as young as 10 years old into all kinds of weird sexual indoctrination. Here is what Laurie Higgins of the Illinois Family Institute wrote in part (read the entire article here):
.......What’s shocking is that during the House debates, no research was provided. State Representatives Robyn Gabel (D-Evanston) stated and Camille Lilly (D-Chicago) concurred that “numerous studies show that comprehensive sexual health education that stress abstinence as well as provides information on prevention results in positive health outcomes for teens and young adults,” but neither representative cited any study.
In addition, they didn’t claim that these numerous studies proved that comprehensive sex ed reduced the rates of teen pregnancy or STDs. Even more troubling, neither Gabel nor Lilly claimed that these numerous studies proved comprehensive sex ed is more effective than SRAs in reducing rates of teen pregnancy, STDs or even in “positively affecting health outcomes.”
Lilly claimed that a Center for Disease Control (CDC) study had concluded that “comprehensive sex ed is more effective than abstinence only,” but she did not identify that study. I could find only two CDC studies on this topic, one from 2009 and one from 2012, both of which concluded that there was insufficient data to make a determination about the efficacy of abstinence curricula. In addition, she didn’t explain what the alleged CDC study claims comprehensive sex ed is more effective at doing.
Supporters in the House repeatedly emphasized the requirement in this bill that information in sex ed must be medically accurate. That is a point with which no one disagrees. The concern of many is with the ambiguous terms “age-appropriate” and “complete.” Typical comprehensive sex ed curricula include information regarding sexuality that many parents and educators consider age-inappropriate.
Similarly, the term “complete” is woefully ambiguous. Who decides what constitutes a “complete” curriculum? We now have campus clubs at the University of Chicago and Harvard dedicated to sadomasochism. Does a “complete” curriculum address the importance of “safe” words for those teens who may engage in sadomasochistic sexual activities? After all, some teens are engaging in these kinds of activities, so shouldn’t we ensure their “safety”? ....

Not satisfied with having the worst public school system in the midwest (to which they won't even send their own kids to), these Chicago-area liberals are also promoting a book which should outrage parents and WILL bring those promoting this to the Lord's attention. David Smith of the Illinois Family Institute wrote the following about a most troubling part of the Chicago-land Sex Ed HB2675 mandate to the Illinois schools:
[**WARNING: content of this article is not suitable for children.**]
.....When you hear the term “comprehensive” as a way to describe legislation, you can be sure the government has big plans to invade a new corner of your life.  “Comprehensive sex education” for public schools is no exception.  That’s why it’s critical HB 2675 be stopped!
HB 2675 would mandate that  highly objectionable sex ed material be forced on our public schools and into the impressionable minds of our children.   HB 2675 has already passed in the Illinois House and has moved to the Illinois Senate. Lawmakers must fully understand the type of curriculum this bill would mandate.
And we need your help to inform them and to safeguard children’s innocent minds!
For an good exposé of what our children are being taught and the rationale behind these types of curricula, which often come from organizations like Planned Parenthood, watch this video from American Life League.  [**WARNING: the content of this video is not suitable for children.**]
We know for certainty that one of the books mentioned in the video, It’s Perfectly Normal, is being used in Illinois schools.  It’s Perfectly Normal is written with 10-yr-old children in mind.  If the “comprehensive” sex education bill, HB 2675, is passed, it will establish a one-size-fits-all approach to sex education and remove local community control over choosing true “age- appropriate” curriculum, another term used in the bill.  (See what the national organization for “comprehensive” sex ed curricula, SEICUS, deems as “age-appropriate.”)
If HB 2675 is passed, young children will be exposed to graphic sexual information to which most parents would find highly objectionable and inappropriate. And teaching books like It’s Perfectly Normal will become more prevalent state-wide.
According to HB 2675, children as young as eleven years old would be required to define sexual orientation using the so-called ‘correct’ terminology, such as ‘heterosexual, gay, and lesbian.’  Masturbation would be taught as normal and that everyone does it, with step-by-step instruction. Not just the biology of sexual reproduction would be presented, but explicit details of sexual intercourse. Slightly older children would be ‘educated’ on how to use condoms, obtain contraceptives or even an abortion without parental consent or knowledge, and would be encouraged to experiment with ‘alternative’ sexual behaviors.
This bill has already passed the Illinois House, and is now being considered by the entire Senate. Please join us in trying to stop this terrible bill!  This sensitive topic should be controlled by parents and teachers, not groups who are in the business of selling sex to make a profit.....

This is the kind of stuff we expect out of those people in Sacramento, California which is sinking further into the cesspool of sin. If you have to put a warning about a warning, why are so called adults pushing this on schools to "teach" to children?! It all boils down to a this - our society has completely lost its Fear of the Lord, which we, the Remnant know, is the beginning of wisdom. But no one has ever accused those people of being wise. Let us then resolve to keep praying for our children - ALL our children - who are under assault by those who could care less about their immortal souls and their physical well-being. Our mission should be to share the love, power and transforming Grace of our Lord and Savior Jesus Christ, Who will deal with all this other stuff, on the Appointed Day.
Amen