WHY ARE WE SO AFRAID? 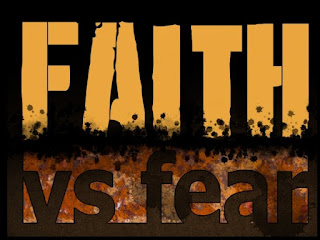 Indeed, let no one who waits on You be ashamed; Let those be ashamed who deal treacherously without cause....
Psalm 25:3
One message has been impressed upon me since the Good Friday service I preached it early this year, and that is the theme of "Faith vs Fear". It happened again on Memorial Day weekend, when I was a guest preacher at a beautiful country church in Auburn, Illinois. What started off as a prepared word about the great Memorial Stones of Joshua 4:1-7, led back to the same theme - "Faith vs Fear".

Sure enough yesterday, I was having the same conversation now, three days in a row with different people from three different churches! The reason why this keeps coming back is so many good people are not just genuinely afraid by what they are experiencing in daily life, but they see and hear no hope coming from any of the places you would expect it from - churches, small groups, community organizations etc. No one I know really look up to political, academic or celebrity leaders and nobody should either.

As we see traditional institution after traditional institution fall - whether it is the late great Boy Scouts of America; or perverted movies, books or music...or whether it is one mega-church pastor falling after another or so-called responsible adults indoctrinating our public school children with graphic sex 'education' instead of math and science - the wheels have come off the bus. One would be tempted to say "who can blame even Christians for being fearful about the present and the future".

Just this past month, the Barna Survey confirmed what we have been observing. The amount of "Nones" - those who have no faith in any belief system, has increased five fold in the past 50 years.  Because of the type of churches we run, we have run off our youth when they "escape" at age 18 as they see pastors more concerned with maintaining their fiefdom and holding on to tithers, than addressing the true needs of the congregation. The scary high numbers of those who say they will never return to church...and who have in fact, walked away from Jesus Christ, will be blamed in part on these church leaders - locally and nationally.

The gist of this brief post is not to bust on those who are falling short to teach the Sufficiency of Scripture to the flock, but to embark on, no matter how small, a drive to show us that we can be concerned without being fearful. The first thing we need to do is realize WHOSE we are.

First of all - are we even saved, redeemed and rejuvenated by the Holy Spirit...that is, are we born again? I can't even remember hearing a preacher use the word "rejuvenation" in the recent past...but this is what MUST happen.

Secondly, after this fact is confirmed, we have to stand on the Fact that WE BELONG TO CHRIST! We do that by ensuring the Lordship in our lives. The cheap grace people have it all wrong and are in mortal danger unless they too bow to the Lordship of Jesus Christ because if He ain't Lord of your life, He ain't your Lord at all!

Thirdly, with that sense of belonging, we must stand on the verse above, which the Lord gave me as I began writing this - Psalm 25:3.  These three steps can begin the assault on reclaiming our Faith from Fearfulness because we arestanding up on the Rock of Christ!!!! We say we are "waiting on the Lord" (Isaiah 40:31), but then we clam up and act like Peter (who denied Christ three times) when things get heated up at the office, or the soccer/baseball field etc....when we should boldly proclaim WHO we are. I did not say be brash and obnoxious! Anyone studying the Life of Christ could NEVER say He was anything but gentle, kind and loving while being firm, powerful and Just!

But if we have these three things and are NOT ashamed of the Gospel, because it is the Power of God unto Salvation, God will take care of the second part of Psalm 25:3, which says "Let those be ashamed who deal treacherously without cause!" Ultimately, those are the ones who should be both ashamed and fearful - not us! They do not know it yet, but God has appointed a day when this too will be addressed!

So why are we so afraid? Well, because we are human! This is why Jesus Christ, the Creator of the World, poured Himself out of His Throne in Heaven and humbled Himself to be born as the GodMan, so He could identify with our emotions! This is why He sent His Own Spirit to live inside of us! You know it, I know it - He lives within my spiritual heart! We should be afraid for those who refuse to turn to the Lord as their Savior, but that is different from turning away from the One Who said "Remember, for I am with you, even unto the ends of the age (Matthew 28:20).
Posted by The Bernie Lutchman Blog at 5/29/2013