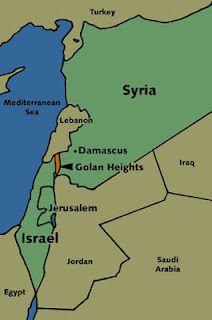 It is almost as if they are playing it according to the Script! The Script I am talking about is the Bible...and the so-called "OLD" Testament to be precise! News comes out this week that Syria, where the chemical weapons from Saddam Hussain's Iraq were hid, is allegedly preparing to use some of them against their own people. Whether this is true or not, there are some facts which cannot be denied. The main truth is this - one of the oldest cities in history, Damascus - is on the way out.

We always hear that the "New Testament" is Jesus REVEALED. This is true. What is also true is the "OLD Testament" is the New Testament revealed too! There are MORE and critically precise End Time prophesies in the Old Testament than in the 29 books of the New Testament. What the New part of the Book shows us are the mechanics of these Old Time prophets' messages - from Isaiah, Jeremiah, Daniel, Ezekiel and Zechariah back to even Moses....need I go on??!! Add Malachi to that as we have seen this past week in this blog! The Book of Revelation tells us HOW it is going to go down. The Old Testament Prophets tells us to WHOM, WHEN and how bad it is going to get! Jesus Himself confirmed a lot of this. He even confirmed Daniel's exact prophesy (Daniel 12:11) of the "Abomination that brings Desolation" (Read Matthew 24 in its entirety about the last days...which we are now living in). 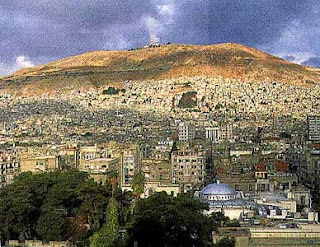 So back to Syria where many of us see the prophesies of Isaiah 17 coming into plain view, as the armies of the north (Iran, Russia) are also waiting in the shadows to jump into fulfilling prophesy. Read the following passage from Isaiah 17 and then watch these videos...pray and then judge for yourself. By the way, the "Cities of Aroer" described below in verse 2 are in modern day northeastern Jordan! So this is going to be bigger and wider than we can even imagine, once it starts!

An oracle concerning Damascus.
Behold, Damascus will cease to be a city
and will become a heap of ruins.
The cities of Aroer are deserted;
they will be for flocks,
which will lie down, and none will make them afraid.
The fortress will disappear from Ephraim,
and the kingdom from Damascus;
and the remnant of Syria will be
like the glory of the children of Israel,
declares the LORD of hosts.....(Isaiah 17:1-3 ESV)

Brother we are on the cusp, and you probably knew I was going to post:

The US has reportedly set up three special command centers in Jordan, Israel and Turkey. US forces are already in Jordan training with Jordanian troops. Anchored off Syria's shore is the USS Iwo Jima carrier group carrying a force of 2,500 US Marines.

The USS Eisenhower steamed through the Suez on Saturday enroute from the Persian Gulf to the Syrian coast. It arrived Tuesday, together with eight fighter/bomber squadrons and some 8,000 sailors, airman and Marines.

So at the moment, Syria now faces a US force of at least 10,000 men, 70 fighter/bomber aircraft, seventeen US warships, two carriers, a guided missile cruiser, and ten destroyers and frigates.

For its part, Syria says it isn't planning to use its chemical weapons arsenal against its own people, but rather, against "external enemies" which in the Arab Middle East, always includes Israel.

For its part, Israel said that even if Assad doesn't attack, Israel fears that Assad's fall could put these weapons in the hands of Hezbollah or Hamas, and says it therefore won't rule out military intervention to prevent it.

So we have NATO, Germany, the US, Jordan and Turkey on one side. On the other side sits the Russian Black Fleet Naval Task Force, also sitting just off the Syrian coast.

IMO, Here is the fate of Israels trust in the NATO and US forces:

Isaiah 17:10-11 (NKJV)
10 Because you have forgotten the God of your salvation, And have not been mindful of the Rock of your stronghold, Therefore you will plant pleasant plants And set out foreign seedlings; 11 In the day you will make your plant to grow, And in the morning you will make your seed to flourish; But the harvest will be a heap of ruins In the day of grief and desperate sorrow.

Here is the the Lord's intervention against those forces or His confounding of them:

Isaiah 17:12-13 (NKJV)
12 Woe to the multitude of many people Who make a noise like the roar of the seas, And to the rushing of nations That make a rushing like the rushing of mighty waters! 13 The nations will rush like the rushing of many waters; But God will rebuke them and they will flee far away, And be chased like the chaff of the mountains before the wind, Like a rolling thing before the whirlwind.
Some cause either allowed or coming from God Himself pushes them back outward and away from the terrors, and then after they are pushed away--literally chased and pursued by the causal event:

Isaiah 17:14 (NKJV)
14 Then behold, at eventide, trouble! And before the morning, he (Damascus) is no more. This is the portion of those who plunder us, And the lot of those who rob us.

It seems to me like a major event occurs that pushes the allied forces of Israel that come against Syria and its cohorts will be forced in major retreat but afterwards will witness the complete destruction of Damascus, with peripheral effects being felt in Northern Israel and Northern Jordan from a retaliatory strike against Syria, Is. 17-2-6. I am not a Prophet but it looks pretty clear that that is what the Lord is trying to tell us through Isaiah. At some point it will occur. May God's will be done. As Mary said in response to the proclamation of blessed angel Gabriel, "Be it unto me according to thy word.

Scary to see this begin to come true. Not necessarily for me, but for the ones I love that are not saved.

@Derrick - Amen to that brother! That's the worse part of all of this I am scared for those family and friends who are not saved...and don't care to be, because they don't believe all of this ties in with the Lord, eschatology etc I look forward to that day and to be with the Lord forever, but oh, to see more saved!

@Pastor Mike!
I knew you would be on board with this as we were speaking on Yeremiah 51 at the skating rink on Monday about Babylon the Great which will rise and fall for the last time! This is some amazing information you posted here! I never knew all of this and the media would not be talking about this as they don't believe the Scriptures either. America is asleep and more interested in iphones, ipads, new video games, Dancing with the Stars and Honey boo boo child, than their own souls...because they believe a lie from men rather than the Truth of God...and there are hardly men like you preaching it out there. We are looked down upon as kooks to be silenced, but so was Yeremiah and Ezekiel and Isaiah, whom they sawed in half. Woe to them, scribes and pharisees, hypocrites who persecuted the prophets....you know the rest of that verse!!!
Amen