Well, the answer to that question is NO! As America faces Judgment (yes JUDGMENT) from God for its mounting sins against Him, more and more events like Hurricanes Katrina (2005), Sandy or Tornadoes that destroyed Joplin Missouri (2011)...or the current horrific massacre like the loss of over 20 children in Newtown, Connecticut are going to draw people's attention to the time-worn question of "HOW CAN GOD LET THIS HAPPEN"?!!!

Whether it is an earthquake in Haiti or a Tsunami in the Far East where hundreds of thousands of lives are lost and millions affected, God always gets the blame - either the blame FOR it, or the blame for ALLOWING it to happen! We can go even farther than that - World War II and the Holocaust where six million of our Jewish brethren were murdered by the Germans and Hitler. Did God cause that? When the great American President Franklin D. Roosevelt REFUSED to allow the SS St Louis to land in the United States 1939 with 937 Jews fleeing Hitler by ship, and they were forced to return to Europe and sure death, did God cause that? NO! FDR did! They even made a movie out of it called the VOYAGE OF THE DAMNED.  We can look at the ill-fated voyage of the SS St Louis some other time. By the way, the Prime Minister of Canada Mackenzie King did the same thing as FDR! 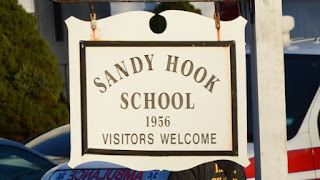 The world refuses to blame Satan and the evil he has wrought on mankind since he ushered in SIN into the world, because the world has walked hand in hand with what the Bible calls 'the god of this world'. Former Pastor and Arkansas Governor Mike Huckabee was asked by Fox business anchor Neil Cavuto the usual question which secular media people always  asked "How could God let this happen?" During Hurricane Sandy, people in the media, who do everything to dishonor, disregard and just plain "diss" God from their "exalted" chairs on ABC, NBC etc were asking the same question.

Maybe, as both a pastor and political commentator, Gov. Huckabee's answer was not as fully fleshed out as say Rev. Franklin Graham's or David Wilkerson's would be, but he was on the right track. Huckabee said "It’s an interesting thing. We ask why there’s violence in our schools but we’ve systematically removed God from our schools. Should we be so surprised that schools would become a place of carnage? Because we’ve made it a place where we do not want to talk about eternity, life, what responsibility means, accountability. That we’re not just going to have to be accountable to the police, if they catch us, but we stand one day before a holy God in judgment…  Maybe we ought to let [God] in on the front end and we would not have to call him to show up when it’s all said and done at the back end".


Well, the good former pastor is now catching a lot of flack from it from secularists in the public square, both on the left and the right. Forget what those people think, was Governor Huckabee CORRECT? Yes. Should he have answered it that way? Maybe or maybe not, but he WAS asked a question. What was a man of God supposed to say? This is going to be a debate coming up soon, right before the evil and corrupt American culture tries to enforce laws against Christian speech, but watch for this phrase in the next two years "Freedom of Worship". US government officials at the highest levels are starting to use it both in this country and abroad. It is meant to silence Christ followers from proclaiming God's Truth of Salvation, Hope, Love, Sin, Pain, Death, Evil and the coming Judgment....and to prevent men like Huckabee from saying precisely what he said above. It is okay to preach inside your church, but "just don't take your Jesus" into the marketplace of ideas. 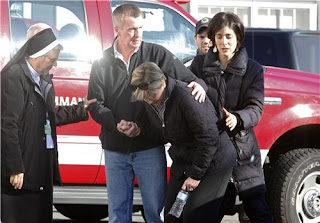 When horrible shootings like Newtown or Virginia Tech happens, and well-known American pastors do not speak up, they leave a vacuum for secularism, pluralism and the growing "inter-faith" movement. You are moving to see more and more of this as the True Hope of Jesus Christ is watered down, as the followers of the god of this world play into the Hands of Biblical Prophesy. When the tragedy of Columbine happened, the good people of Colorado allowed a deeply moving service led by Rev. Franklin Graham where he brought the true comfort and hope of Christ to a grieving nation. However, we have not seen that sort of Gospel-centered message since (in response of national tragedies), except for Franklin's dad, Billy, at Washington DC's National Cathedral a few days after Evil from the Middle East hit us on September 11, 2001.

So it is up to the people of God - us Christians - to pray for the salvation and comfort of the people of Newtown and especially the families of those who lost their precious young children, who are now in the loving Care of the Savior. It is up to us, the followers of Christ, to keep sharing the Gospel of our Lord and Savior...to keep sharing how folks can be saved from their sins...to keep sharing how to be delivered from evil and temptation and sin...to keep sharing, no matter what the world will say about us. Remember, my friends, the world hated our Lord Jesus, long before they hated us. What makes us think that they will love us now?! So be mindful WHO is watching us - God. He has the power of life and death - both now and in Eternity. He is the One to Whom we are accountable first and foremost. Let us now go and love others to Him. Evil is going to ramp up in these last days. God will get the blame. But the world will be sent to eternal shame.  Let's win many to Glory and Heaven, while there is still time.

So, should Christians stay silent when evil and tragedy like Newtown hit? No...and a thousand times NO! We speak loudest when we speak directly to our God in prayer and through our love to our fellow man, regardless of what the world says.
Amen
Posted by The Bernie Lutchman Blog at 12/16/2012