END TIMES FOCUS - JUDGMENT & TO WHOM 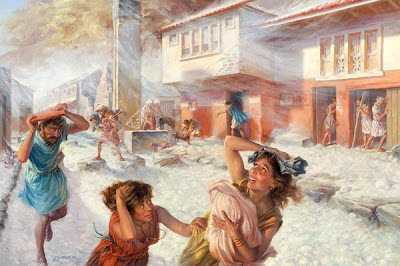 The confluence of world, national and religious events are all pointing to the coming fulfillment of several Old Testament prophesies. Of course, we know the Timing is up to the Father Himself, as Jesus said. But it is uncanny that several of America's top bible teachers - from Drs Chuck Missler of Koinonia House to Chuck Swindoll have done or are now doing powerfully intentional series on the Book of Daniel. These two series, from completely different parts and backgrounds of the country, are weaving a piece of fabric which is hard to ignore.

For instance, it is hard to ignore armies and weapon systems lined up in the horrible and anti-semitic Arab countries, supplied by the great godless power from the north - Russia! It is hard to ignore the brutal moslem brotherhood, now firmly implanted as dictators in Egypt. It is hard to ignore their oppression of Coptic Christians there. (It is also hard to ignore how the US government is ignoring the treatment of the Copts and other Christians persecuted and brutalized worldwide. This should lead us to pray more for our people, and put the rest in God's capable Hands.)

While the Lord has led Missler and Swindoll to teach on the Book of Daniel, the soon to arise Babylon and more...The Lord has led me to Malachi 3 and 4, which we are going examine, vis a vis, the coming Judgment!  Scripture explains Scripture and as we saw in the last post on the Sixth Seal, Malachi 3:1-3 is explained by Revelation 6:12-17! Now, I sense the Lord leading me now to put up verse 5, so I will leave Verse 4 of Malachi Chapter number 3 for our discussion of the ungodly doctrine of Replacement Theology!

Now, included in the list of people supplied by Revelation 6:15a (...the kings of the earth and the great ones and the generals and the rich and the powerful, and everyone, slave and free....), the Lord adds those whom our corrupt American Celebrity Culture holds up for honor, while despising the Creator of the Universe, King Jesus.

Right up front, one thing the world will regret...including those who think everything will "work out in the end" is this - when God says in Malachi 3:5 that He "will be a swift witness" - there will be absolutely no dispute as to the evidence!!!! He has seen everything done, in secret and in public....and as the literal Hebrew word "Ed" indicates into English translation, this "Witness" will be "against literal persons"!!!! Therefore:

Judgment is coming against those who appear in psychic TV commercials and open palm and tarot-card reading shops on our busy city streets.
Judgment is coming to those who promote, make, sell and view (with no critical eye to its inherent evil), things like Harry Potter, Twilight and its offshoot - "Fifty Shades of..." (what the poobahs of perversion call "mummy porn").
Judgment is coming to those who not just lie to entire nations and people about events etc, but those who have the power to correct misinformation, yet make themselves twice as much a child of hell, as those who swear falsely.
This judgment will be against not just the makers of movies and music, but those in the mainstream media here and in the total communist countries like China, Cuba, Russia etc. The judicial system will not escape. Judges who rule against the Will and Word of God, will discover just Who the REAL Judge of the Earth is....and there is no appeal on the Terrible Day of the Lord!
Judgment will be handed down to those who abuse the poor and exploit them to make cheap consumer goods to sell in stores named after fruit and more.
Judgment will be handed down to those who manipulate the widow, the fatherless, the lost and hopeless by using them as pawns while keeping them shackled in prisons called ghettos and housing projects, so they can be controlled by monthly handouts, substandard schools and "churches" led by men and women who do not fear God and are using His pulpits for their own personal gain.

The one that both God's saved people and those who will be judged as forever condemned (see the partial list above) should be careful, mindful and very intentional about is the sure Judgment on those "who do not fear me, says the Lord of Hosts" (the end of Malachi 3:5).  The original Hebrew word for fear- "Yare" is very clear...and as an aside, since I believe that Hebrew is the language of Heaven, this is very serious. The literal translation is even scarier than just looking at a weak English translation of the word!

Is this a welcome and nice image of Christianity? No! If folks want gum drops, roses and lies....all we have to do is turn on Christian TV on Sunday morning and listen to the most popular preachers in the world tell you "God has a plan for you....and here is how you get what is due you...a nice car, bills paid etc etc...." This is reality. That Sunday morning claptrap ain't! Those charlatan preachers with the $100,000 pearly white teeth and $5000 Italian cut suits will be lumped in with the kings, prime ministers, presidents and oppressors of this world, when the Sixth Seal begins. Ignore them! Stick to the Word of God and let us all resolve....as yet another new year is around to corner, let us resolve to dig deeper in the Word and measure our own lives up against it to see if WE measure up to what God demands....and if not, let us repent, seek His pardon and forgiveness and put all our faith in His Son, Jesus. If we do not measure up, let us surrender our lives to Him. If we do not measure up, let us cry out on our faces right now....and seek His cleansing and restoring and then let us walk in His Righteousness, that WE will be able to stand, when the Coming Day of the Lord commences.

I have studying prophecy for over 20 years with my buddies the prophets. We also followed Harold Camping on family radio with over 50 radio stations worldwide. He wrote a thick book and an addendum called 1994?. He wasn’t sure of the date of the rapture so he included a question mark in the title. He insisted he was not a prophet but was doing a study of prophecy from the King James Bible. He wrote several other books as his study if you can know the day and the hour of Jesus return.

He hosted Open Forum on Family Radio to a host of angry callers insisting that he can’t know the day or hour. I turned him off because of the hostilities and because so many listeners don’t know what a question mark is (?). He was not making a statement of fact as the 1994? states.

Anyway, buddies and I wrote America is Babylon according to Revelation 18. Ron had been preaching that for over 20 years. I was hard to convince but the evidence is overwhelming. Do you use Webter’s Babylonian Dictionary.

Anyway that is not all I wrote. I just posted something old, blogs are new entitled, “The End Times ?” In the tradition of Harold Camping all my materials are free to copy from my blog. You can locate “America Is Babylon, A Three Acts Play” also. Just go to http://www.chaplainwinston.blogspot.com