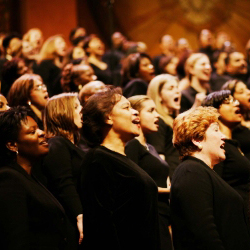 FROM BROOKLYN TO THE KINGDOM!
One of my favorite people in the world to read is also the lead pastor of the greatest church on the eastern seaboard of America - the Brooklyn Tabernacle Church. That man is Jim Cymbala, whose books Fresh Wind, Fresh Fire and Breakthrough Prayer played a major role in the development of the prayer ministry, which God gave me as a lifestyle. His church has given us the world-famous, award-winning Brooklyn Tabernacle Choir!

Many think of the Brooklyn Tab as a new mega-church. However it has been around for almost 165 years! Founded in 1847 as the Central Presbyterian Church, when the presbyterians were the major revivalists of America, the church went through many phases! It was destroyed by fire twice and a thunderstorm once. When one of those fires destroyed it in 1894, it had over 6000 members. After that, the Tabernacle floundered and fizzled until the 1980s when Jim and Carol Cymbala were called by God to take over a dying church of 30 people.


Through many hardships; financial difficulties; spiritual warfare attacks and general days of despair, they persevered. They persevered not in their own strength but in the same kind of love we see demonstrated in today's passage. How did they persevere? Prayer, Praise and the Power of Love!


So much can be said about the Cymbalas and what God has used them to be as His ambassadors in the most secular city in America - New York City! However, that is a story best told by this wonderful couple in their own books!


The Brooklyn Tabernacle and David Wilkerson's Church on 42nd Street have become NYC bookends to the library God is building for His Kingdom as the Church Ages rapidly heads for the finish line! This will culminate in the completion of God's plan for the Restoration of Mankind, which He began through Abraham - the Father of Many Nations!


We have previously been going verse by verse through Romans 15, but to keep the context of what the Lord intended, today, we must look at Verses 8-12 as a package.


For I tell you that Christ became a servant to the circumcised to show God's truthfulness, in order to confirm the promises given to the patriarchs, and in order that the Gentiles might glorify God for his mercy. As it is written,
“Therefore I will praise you among the Gentiles,
and sing to your name.”
And again it is said,
“Rejoice, O Gentiles, with his people.”
And again,
“Praise the Lord, all you Gentiles,
and let all the peoples extol him.”
And again Isaiah says,
“The root of Jesse will come,
even he who arises to rule the Gentiles;
in him will the Gentiles hope.” (Romans 15:8-12 ESV)


This powerful portion of Scripture from Romans 15 lays out beautifully the Plan of God. First, Christ came as the King of the Jews (the "Circumcised) in order to fulfill all the patriarchs (Moses, Abraham, Jacob etc); the prophets and the Writings and to show Him Faithful and True! The Jews rejected Jesus and crucified Him as the Passover Lamb in AD 33. Thus began the Church Age.

(AS A SIDE NOTE - Contrary to incorrect teachings in modern western churches, the church did NOT replace Israel in God's Plan. This heresy is called "Replacement Theology" - RUN FROM IT!)


We, who are Gentiles, have been adopted into the Family of God with the same blessings, benefits and privileges of Joshua; King David; Isaiah; Jeremiah (my favorite prophet) or the Apostle Paul - all Hebrews! For that reason, because we have Christ (if we are truly saved and made right before God), we should praise and rejoice!

We should praise and rejoice because as Verse 12 says "the Root of Jesse" will come...."to rule...in Him will we (the Gentiles) HOPE"!!! That Root of Jesse is Jesus...who is from the House of David (Jesse's son)!


Which brings me back to the Brooklyn Tabernacle Church - anyone who has read or seen anything about this church should marvel. The Spirit of God led me to know once that this is exactly what Heaven will look like - this congregation! Almost every nation, every tribe, every tongue is represented in this amazing 10,000 plus person congregation....and that includes some Messianic Jews! This is a true reflection of the New York City melting pot.


I encourage all to listen to the Tabernacle choir music or an online Sunday morning sermon by Pastor Jim Cymbala and you will hear true joy, praise and as the verse above says  about what goes on there "LET ALL THE PEOPLES EXTOL HIM"!!!

Amen - would you worship Him today? He is able! Christ is Able Still to Save!