FOR SUCH A TIME AS THIS 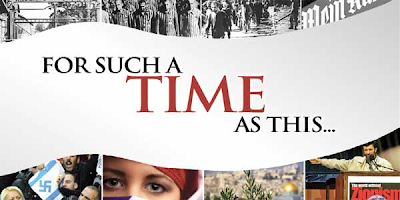 
Country singer Trace Adkins even wrote a song about it where the first verse goes:


I was just looking back at yet another amazingly fast week and realized that the ancient Jewish celebratory feast of Purim just flew by. This is the story of Queen Esther and how she, one brave woman, rescued her people from the hands of a jealous and murderous band of hoodlums in Persia, led by some official named Haman.  This brave woman accomplished this task alongside her wise relative Mordecai.


The key verse, from the Book of Esther, is Esther 4:14 which says "For if you keep silent at this time, relief and deliverance will rise for the Jews from another place, but you and your father's house will perish. And who knows whether you have not come to the kingdom for such a time as this?” (ESV)


We all know these are perilous times, but as the old Charles Dickens line goes "these are the best of times, and the worst of times". We could even be living in an era, where events will quickly come to THE breaking point within the next 10 years and Jesus Christ returns! There is a Timeline for these events and they follow seriatim, according to Biblical revelation.


This Timeline starts rolling from Matthew 24 and will be fulfilled when the Eastern Sky splits, a White Horse emerges and the entire world will see Him at the same time, followed by ALL of Heaven's Armies!


The Timeline is set. However, we still have to live until then. Therefore the question is - how then shall we live?


I take my queue from the timeless verse above from Esther 4:14 and let's break it down:
"FOR IF YOU KEEP SILENT AT THIS TIME":  The commission - we had better speak up now, while it is still today, because the moment is now. God has ordained a day - Today - for us to reach someone for Him...to show love, mercy and kindness. That is one part of speaking up. The other part is actually PROCLAIMING TRUTH!


The god of this world has covered it with lies. Lies, Lies, Lies lie everywhere. American news anchors from ALL the networks -NBC/ABC/CBS/CNN/PBS etc lie through their teeth daily and knowingly, in order to promote their own private or social agenda.  The various cults and other religions of this world are boldly going hither, thither and yon with their own message. While God's people - from pastors to pewsitters - remain silent.


"RELIEF AND DELIVERANCE WILL RISE....BUT YOU AND YOUR FATHER'S HOUSE WILL PERISH":  This is the result of doing nothing and letting the world, the flesh and the devil run your lives...that is, someone else will rule over you and it will not go well for you and I! The choice here is so stark and as clear as daylight - we had better not be quiet about the Word and Truth of God or we will be taken over by a system which will positively destroy us!


"AND WHO KNOWS WHETHER YOU HAVE COME INTO THE KINGDOM, FOR SUCH A TIME AS THIS":  The statement here is more of a revelation than a question. The original Hebrew word 'naga' literally means that we were sent ON PURPOSE INTO THIS REALM - for precisely these times!


God never makes mistakes and knows exactly what He did when He sent you and I to live here in North America, Australia, South Africa, Brazil, Finland or Asia or wherever this blog is read! He knew we would not just boldly proclaim the Word of God, but also that we would fellowship, encourage and just love the saints to a point of enhancing the Praise and Worship of His Glorious Name!


So as we think on these things, as we read the horrible headlines and signs, let not your hearts be troubled! He knew these would happen, yet chose you and I to go out there, to make a difference....to take back our families and communities for Jesus, for SUCH A TIME AS THIS! Amen!

Email ThisBlogThis!Share to TwitterShare to FacebookShare to Pinterest
Labels: best of times, breaking point, celebrate, esther 4:14, evangelize, for such a time as this, fortunate, live, mordecai, naga, purim. festival, timing, worst of times

Amen! Thank you for the refreshing encouragement that God is always in control - and that all things happen in HIS perfect timing. Omnipotent and omniscient, how wondrous is our Father! Grateful I am that He was wonderful work for me "for such a time as this." Thankful I am to co-labor with you for His eternal Kingdom! God bless you, dear brother in Christ!

My sister! Thou art a true woman of God and a fellow traveler of the Way, the Truth, the Life! Thank you for that powerful comment and for holding on to the Word! His attributes are so Amazing and stand forever, so we can trust in everything He does because He is timeless, His Timing is perfect!
God bless and keep you, Caroline! Thank you for always having a good, kind and encouraging word, in Jesus' Name, amen!