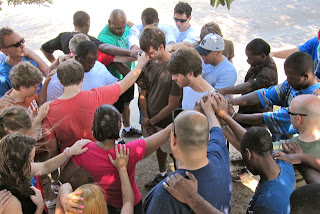 CAN'T WE ALL JUST GET ALONG?
May the God of endurance and encouragement grant you to live in such harmony with one another, in accord with Christ Jesus...(Romans 15:5 ESV)


Euodia and Syntyche are two names you won't find in the Boston phonebook....not even the one in Dublin or Belfast! These two women are not runway models from Greece but two Godly saints who constantly fought each other! No matter how much they tried or how much their friends pleaded with them, the conflict there was too much...and these were Christian women!


Look at what their good brother, the Apostle Paul, says about them here "I entreat Euodia and I entreat Syntyche to agree in the Lord. Yes, I ask you also, true companion, help these women, who have labored side by side with me in the gospel together with Clement and the rest of my fellow workers, whose names are in the book of life" ...Philippians 4:2-3 (ESV)


We all know that Paul was Jesus' personal emissary to bring the Gospel out of the Middle East into western Civilization, which he said with stunning success. Yet, here is the man of God pleading for his co-laborers in the mission field to "can't we all just get along"?!


These are leading members of the church at Philippi and hence the reason Paul was spending so much time trying to get the intense disagreement squashed before it damaged the work Christ sent him to do! Sometimes, we Christians can be real stumbling blocks to others seeing the True Love of Christ, by the way we conduct ourselves! If he did not stop this dangerous conflict between Euodia and Syntyche, the vision Christ gave Paul for the model church in Philippi would be in danger!  This may sound like just another Bible story. But here is why the Philippian church is important to us today in 21st Century America - it is the same model we use today!!!!!


There are some other smaller points but we get the point. If Paul had not buried the bone of contention which Euodia had with Syntyche and vice versa, the western church would be in  heap big trouble and not what Christ intended.


This is what Romans 15:5 is telling us - we have to live in Unity, NOT Kumbayah with EVERY FALSE doctrine, but Unity in the True Body of Believers, so that God will give us ALL the ability to persevere and make it through these worsening times! True Bible believing Christians are the only ones who will make it through to the end and the only way to do so is to have each other's back in prayer, supplication, constant care and checking on each other and true fellowship as a worshipping body and neighbors!

Email ThisBlogThis!Share to TwitterShare to FacebookShare to Pinterest
Labels: apostle paul, body of christ, can't we all just get along, euodia and syntyche, macedonia, philippi, the philippian church, Unity, western church