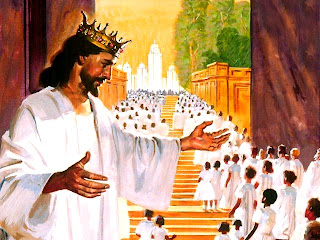 ONE LOVE, ONE VOICE, ONE BODY
...that together you may with one voice glorify the God and Father of our Lord Jesus Christ. (Romans 15:6 ESV)


Jesus' Disciple John saw the future when he was allowed into Heaven and given a preview of the distant future. What he saw there stunned him and he wrote in Revelation 7:9 "After this I looked, and behold, a great multitude that no one could number, from every nation, from all tribes and peoples and languages, standing before the throne and before the Lamb, clothed in white robes, with palm branches in their hands".


While they walked with the Master for three years, John and the other disciples knew their work was to reach the Jews first. Jesus Himself said in Matthew 15:24 that He was sent ONLY to the lost sheep of Israel. It had to be so because, sadly, He knew they would reject Him. This would enable the Good News to be sent throughout the globe so that every tribe, tongue and person would hear and believe.....that is, until the time of the Gentiles (or the church age) is over.


At the time John saw this vision called the Book of Revelation, he would have known of the Evangelistic or Missionary Journeys of his former nemesis from the Temple hierarchy Saul/Paul. He would have known of all the churches planted in former pagan towns by Paul from Macedonia to Ephesus. But it appears that nothing prepared him for what he saw - a mass or possibly millions of humans dressed in white worshiping the One True God!


This is a powerful exhortation and precisely why there should be Unity in Purpose and Love in the True Body of Christ, until He calls us home! Romans 15:6 is there to remind us that we should get used to functioning as that united Body. Why? Well, because this is what we will be doing in Heaven for all times - worshiping God, glorifying God!

The one voice he talks about in this verse, with which we glorify and praise the Name of Abba Father literally means sharing the SAME faith naturally and without conflict! Anything that deters, dilutes, destroys or distorts the songs of Praise will never reach the Pure and Holy Ears of God.


Such conduct disrupts the flow of the Spirit and could limit what He was sent to do.
Such conduct limits the blessing we receive from Father God and stunts the growth of the church!


So Father, in the Name of Jesus, I ask that You seal this Word in our hearts that we may keep our eyes on You and not on pettiness, conflict and useless chatter which turn many away from You and keeps Your church from functioning as You intended. Help us to remember Whose we are and just Who our first Love is - and as long as we remember it is all about You and not us, we will grow in the love (agape) we show each other, we will live better with each other and thus live mightily for You, in Jesus' Holy and Precious Name, amen.