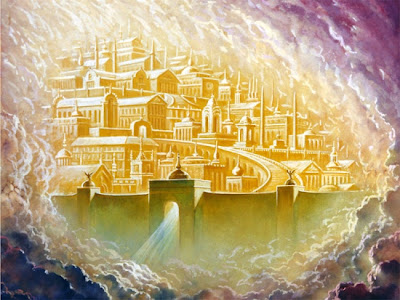 
Yesterday we saw in our verse (10) that Abraham was looking CONFIDENTLY forward to the Eternal City of God, whose very Foundations were designed, constructed and appointed by the Lord.  In the verse, the Bible uses the word CONFIDENTLY for a reason. Confidence is derived from two words: con (with) and fide (faith). Therefore, it is WITH FAITH that Abraham anticipated.


When Old Testament (or pre-Calvary) saints died, they went directly to Paradise. Christ called it "Abraham's bosom" which is a place of Comfort and Rest for those who died in Faith. They obviously did not have a chance to believe in and accept Jesus as Lord of their lives, because He was not crucified on the Cross yet. Jesus' death on the Cross made atonement for every believer from Adam until the end of time.


Several passages in the Bible describe what Heaven is like. The goal of this message is not to look into every passage on heaven but to give the flavor of the Eternal City. But I must tease with this verse from Isaiah 35:5 NASB "A highway will be there, a roadway, and it will be called the Highway of Holiness. The unclean will not travel on it, but it will be for him who walks that way, and fools will not wander on it".


Wow! This is an important verse because it prophesied over 700 years before Christ, just who is going to be a resident of the eternal city of God. From here on out, the Bible describes the City, which both Abraham and John the Apostle were allowed to see, according to the Word of God. I present it without comment for your meditation, illumination and instruction. May it comfort and bless you this day, as we see ourselves surrounded by such a troubled world, which is perishing in sin and evil.
Glory to His Name:

All things made new

1-4 Then I saw a new Heaven and a new earth, for the first Heaven and the first earth had disappeared and the sea was no more. I saw the holy city, the new Jerusalem, descending from God out of Heaven, prepared as a bride dressed in beauty for her husband. Then I heard a great voice from the throne crying, “See! The home of God is with men, and he will live among them. They shall be his people, and God himself shall be with them, and will wipe away every tear from their eyes. Death shall be no more, and never again shall there be sorrow or crying or pain. For all those former things are past and gone.” 5 Then he who is seated upon the throne said, “See, I am making all thing new!” And he added, “Write this down for my words are true and to be trusted!”
6-8 Then he said to me, “It is done! I am Alpha and Omega, the beginning and the end. I will give to the thirsty water without price from the fountain of life. The victorious shall inherit these things, and I will be God to him and he will be son to me. But as for the cowards, the faithless and the corrupt, the murderers, the traffickers in sex and sorcery, the worshippers of idols and all liars—their inheritance is in the lake which burns with fire and sulphur, which is the second death.”

The vision of the new Jerusalem

9 Then one of the seven angels who hold the seven bowls which were filled with the seven last plagues, came to me and said, “Come, and I will show you the bride, the wife of the Lamb.” 10-14 Then he carried me away in spirit to the top of a vast mountain, and pointed out to me the city, the holy Jerusalem, descending from God out of Heaven, radiant with the glory of God. Her brilliance sparkled like a very precious jewel with the clear light of crystal. Around her she had a vast and lofty wall in which were twelve gateways with twelve angels at the gates. There were twelve names inscribed over the twelve gateways, and they are the names of the twelve tribes of the sons of Israel. On the east there were three gateways, on the north three gateways, on the south three gateways and on the west three gateways. The wall of the city had twelve foundation stones, and on these were engraved the names of the twelve apostles of the Lamb.


The measurement of the city

15-17 The one who was talking to me had a golden rod in his hand with which to measure the city, its gateways and its wall. The city lies foursquare, its length equal to its breadth. He measured the city with his rod and it was twelve thousand furlongs in each direction, for its length, breadth and height are all equal. Then he measured its wall, and found that to be one hundred and forty-four half-yards high by human measurement, (which the angel was using).

The splendor of the city’s building

18 The wall itself was built of translucent stone, while the city was of purest gold, with the brilliance of glass. 19-20 The foundation stones of the wall of the city were fashioned out of every kind of precious stone. The first foundation-stone was jasper, the second sapphire, the third agate, the fourth emerald, the fifth onyx, the sixth cornelian, the seventh goldstone, the eighth beryl, the ninth topaz, the tenth green goldstone, the eleventh zircon, and the twelfth amethyst.
21 The twelve gates were twelve pearls, each gate made of a single pearl. The street of the city was purest gold gleaming like glass.


The splendor within the city

22-26 I could see no Temple in the city, for the Lord, the Almighty God, and the Lamb are themselves its Temple. The city has no need for the light of sun or moon, for the splendour of God fills it with light and its radiance is the Lamb. The nations will walk by its light, and the kings of the earth will bring their glory into it. The city’s gates shall stand open day after day—and there will be no night there. Into the city they will bring the splendours and honours of the nations. 27 But nothing unclean, no one who deals in filthiness and lies, shall ever at any time enter it—only those whose names are written in the Lamb’s book of life.