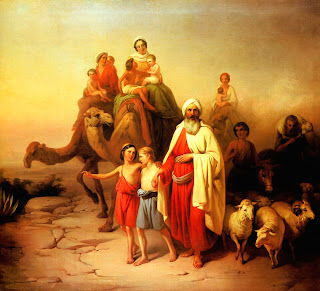 BY FAITH, ABRAHAM “CROSSED OVER” – YOU DON’T HAVE TO CROSS OVER ALONE
We all know men do not like to ask for directions! I have no idea what it is! I think it is rebellion. God told Adam and Eve not to eat the fruit. They did. God blamed the man and said “because you listened to your wife and ate the fruit…(Genesis 3:17).

So we see men not only don’t like to ask for directions when we get lost occasionally (GPS or not) but we blew it with God from the start!

So now, get this – God spoke to a pagan man….who directly descended from those pagan worshipping rebels from the Tower of Babel and their Nimrod leader. This man was a 75 year old Abram whose father Terah, had many worthless idols in his house.

It was by faith that Abraham obeyed when God called him to leave home and go to another land that God would give him as his inheritance. He went without knowing where he was going. HEBREWS 11:8 NLT

God then tells Abram to pack up his riches and head west, old man. Even more surprising – Abram did!

Question:  in these days of bureaucratic red tape, all the issues involved with moving (forwarding mail; changing utilities etc) …if God told you to move to El Paso, Texas and open a mission and eat beans and rice…would you do it?

Abram became the first Hebrew! The word Hebrew is not Jew…it literally means “one who crossed over”…..because he crossed over from this pagan homeland by the Euphrates (Ur of the Chaldeans…now around modern day Iraq), to a land God (the REAL GOD) promised him in Canaan.

So here’s the deal – God called, Abram went – by Faith. This indicates God saved Abram the minute He called him, because Christ did not yet die on the Cross. This would come 2000 years later.

We are saved the same way – by Faith.
We become grafted into the “tree” of the Hebrews because, by Faith, we too cross over from death into Eternal Life, the moment we are saved, accept Jesus as Lord and Savior and obey!

God later changed Abram’s name to Abraham which means “father of many nations”. We are citizens of this nation, because we too, are part of the inheritance of our Christ – the Lord Jesus!!!!! WOOHOO!! Glory to His Name! I know that’s not professional or dignified…but WOOHOO again and thank you Jesus for saving me! AMEN!!!