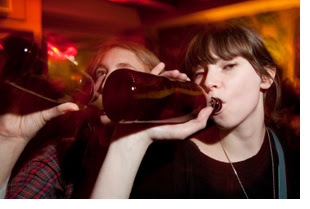 Teenage binge drinking is fast becoming a major cause of death for more young girls than boys these days! It is estimated by national authorities that about 3 million under-age teenagers drink alcohol on a regular basis. This is not only illegal but unhealthy!

This horrible upward trending behavior is playing havoc with our youngsters across the fruited plain! In a few weeks, a scary new report called "Alcoholism: Clinical & Experimental Research" (done by the University of California at San Diego and Stanford U.) will confirm that severe brain damage are done to girls more than boys,  due to binge drinking! Spatial working memory (SWM) is the most affected part. This memory is important as SWM affects simple skills like comprehending directions, driving a car or even playing sports!

The upcoming results by these colleges will show exhaustive research done on both boys and girls who both confessed to drinking alcohol and those who did not. The kids who did not drink had normal brain development in school and are maturing nicely. Those who drank were found by the lead researcher, Dr. Susan Tapert (UC San Diego, who will release the abovementioned report) to have serious defects!

Other research has found the following in teens who abuse alchohol: weight gain; impaired judgment; dehydration; dulled senses and delayed reaction time to basic life functions. There are more. But if you notice this in any young people around you, please look into it. There may be more to what meets the eye!

Don't be drunk with wine, because that will ruin your life. Instead, be filled with the Holy Spirit..Ephesians 5:18 (NLT) 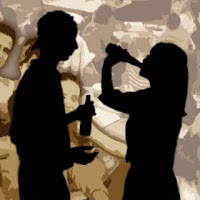 But not just that - sexual immorality is on the increase with this group due to the numbing effects of alcohol. This would be true at any age, but because a teen has no capacity to discern in a mature way, the freedom  to explore the world through smartphones and the internet has given them unlimited access to potential permanent self destructive sexual stimuli!

It is amazing the amount of 12 -15 year old girls I see, in the ministry, with birth control patches and babies who should be their siblings. Sexually transmitted diseases are on the rise.  Abortion is too, except it is not talked about and done quietly out of state...with their parents consent! Imagine that

I am looking forward to the abovementioned report to see how the church or church leaders can assist in bringing change to this. But I must say that the defense of alcohol consumption by people who should know better is increasingly shocking. Recently, some  YRR (Young, Reformed and Restless) pastors were called on the carpet by elder christian statesman/preacher Dr. John MacArthur for drinking alcohol in pubs etc, while holding group discussions on the bible! The YRR's saw nothing wrong with doing this!

While he unfairly attacked some of the preachers by name whom I have since researched, this movement by SOME elements of these influential young preachers is a horrible example to teens who are already under the gun of peer pressure to abuse social networking media; sexual experimentation and worse than all of this - readily available alcohol! Some responsible adults who know these young pastors need to stop them and give them a good talking too.

What we, as responsible Christian parents and leaders, should occupy ourselves with is - A SENSE OF URGENCY! Some of these kids confessed their parents got them the booze! This is a felony and the Law has caught up to some of these stupid people! We also need to teach the children well in our youth groups. Most youth ministry is concerning itself with electronic games; coffee shop experiences and the occasional visit to a homeless mission to help pass out food around Thanksgiving.

Hardly any are seeing the hurt and destruction right under their noses because they are so wrapped up in their church programs and being yes men to a controlling pastor. They will only find out there is a problem when the teen, who is the 'good daughter' of Mrs. So- and - so..."and I can't believe she did that"....when the signs were right under your nose....!!!!!! When is the body of Christ going to wake up? Probably never. A small few may have good alcohol or abortion recovery support groups - most could care less.

The Pregnancy counseling centers are receiving and helping teens who are coming out of these same churches where their ignorant pastors care more about the collection plate or controlling the volume of the songs on Sunday morning. Don't ask me how I know this, but I do and it's a crime that the majority of pastors in any given city, REFUSE to help BEFORE problems explode, because, between you and I....and I see this first hand as the leader of a regional outreach ministry with no agenda but Jesus - they just don't care!

Yes, I accuse pastors of not caring. Some of them don't even care of their congregations are truly saved and are under some Discipleship program!  I stand by this and will say it again to their faces, because they are just as guilty if they did not proclaim Truth to these teens and then proceed to do what it took to protect them in our churches. Enough said.

Therefore, please, please pray for our children, please...and show them, while teaching them, the Truth of this verse below. That, they too, can be more than conquerors, in Jesus' Name, amen!

The temptations in your life are no different from what others experience. And God is faithful. He will not allow the temptation to be more than you can stand. When you are tempted, he will show you a way out so that you can endure...1 Corinthians 10:13 NLT