THINK ON THESE THINGS - MONDAY 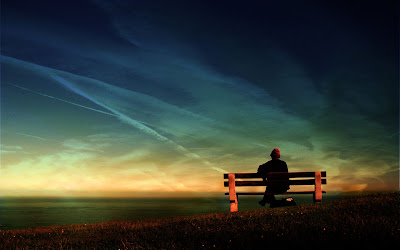 WAITING FOR THE PROMISE
(WE RETURN TO HEBREWS 11, VERSE BY VERSE
TODAY'S WORD - BELIEVE)


Has someone ever made you a promise which not only sounded to good to be true, but could even be termed totally way out there?  I know how human nature would react - we would say "now way"...but inside, our "willer" would say " YES, WAY....er...please"!!!


For instance, take this one man who lived over 75 years surrounded by generations of not just pagan idol worship, but some of the vilest and sex-oriented debauchery which literally had its roots with Noah's great grandson - King (Ima) Nimrod! This man's dad was one of the richest  in UR, (which is not a Twitter abbreviation for "you are"). Terah reigned in Southern Iraq as one of the richest men there.

But one day, God said to Terah's son- take up you beautiful childless 74 year old wife Sarai and go west, old man, to this new land....BUT I am not going to tell it just....just GO! Over twenty years go by in the hot and harsh deserts of the Cradle of Creation. Then one day, God tells this man "your 99 year old wife is going to have a baby, and you da man - at age 100"!


Faith enabled Abraham to become a father, even though he was old and Sarah had never been able to have children. Abraham trusted that God would keep his promise....Hebrews 11:11 (GWT)


Jesus Himself confirmed it to Abraham - Face to face - when the LORD visited Abraham and Sarah, with two angels, on the way to destroying Sodom and Gomorrah. Sarah laughed in private - an action with did not escape Jesus, who rebuked her. This story is told in Genesis 18: 10-15.


What we should ask ourselves is this - do we laugh at the Promises of God in His Word, or do we believe them... even a little bit?  Little Faith, just like a little knowledge, can be a dangerous thing. Look what happened when Sarah got impatient waiting for the Lord to send a natural heir for Abraham. She gave her young Egyptian servant girl, Haggar, to Abraham to impregnate, and we now have the Middle East crisis led by the sons of Ishmael!


Therefore, the word today is Believe. When the Lord, through His Spirit or the prophetic declaration of others, makes a promise to you, believe it! Then once you believe it, do not try to force His Hand. Just "Be still and know that He is God" (Psalm 46:10). Because if you try to help God out, they could be consequences you never bargained for!

Wow! I finally got through!
Bernie, what an amazing post today! It is so true that the moment we think we can do things better than God, everything falls apart. When He speaks, we need to be still and listen closely, then act on His directive alone.
May His blessings abound in you life!
Martha

The Hankmeister!
Thank you for being so kind as to share this on thy page, brother! Am very humbled! Am loving this walk through the Faith Chapter...now about to enter Week 4!! ;-))

Martha!!
May His blessings overflow in YOUR life as well and in your family as you minister to and love them to pieces. The good thing about the maturing walk in Christ is we came to realize, you know - God does not really need my help-I need HIS!! AMEN!!
brother bl