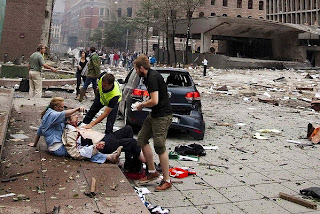 HOW TO MAKE SENSE OF IT ALL
"THE NORWEGIAN MASSACRE"
As long as we live in this present age, we will continue to be hard-pressed to make sense out of senseless violence. This current trend started to escalate in the late 1990's when terrorists first attacked the World Trade Center. Then Tim McVeigh took down the Oklahoma City federal building. We all recall Dylan and Kliebold, two crazy teenage boys, going on a deadly spree at the Columbine High School...and on and on.
Of course, the biggest attack on the nation was on September 11, 2001...almost 10 years ago. Now we have the most vicious attack on fellow humans in NORWAY since World War 11. News from Norwegian police is that 32-year-old Anders Behring Breivik, who was arrested for gunning down children on the island of Utoya yesterday. Much analysis will be done over the next few days. However the question is, how should God's people respond when innocent people are slaughtered wantonly?
Jesus said in John 10:10 (NASB) that the thief (Satan) comes to "steal and kill and destroy BUT I have come that you may have LIFE and LIFE more abundantly"!!!! This is firm and categorical statement from the Giver, Protector and Sustainer of Life - the LORD Jesus!
Man has free will and the run of this planet ever since God gave Adam dominion or the power to rule over the earth back in the Garden of Eden!  Man has messed it up royally and we have what we have today because of Sin!  The god of this world - the devil - has command for this short time left....and we MUST be aware of our surroundings. Ephesians 6:12 explains it best "For we do not wrestle against flesh and blood, but against principalities, against powers, against the rulers of darkness of this age, against spiritual hosts of wickedness in the heavenly places".
The wonderful news is - we have already conquered these thieves who steal lives and destroy our societies. We conquered it with Christ when He gave it all on the Cross of Calvary and rose from the dead to proclaim Life and Life abundantly!!! AMEN!
So in light of yet another mindless massacre, let's listen to the words of Paul from Ephesians 5: 15-  "Be very careful, then, how you live--not as unwise but as wise, making the most of every opportunity, because the days are evil. Therefore do not be foolish, but understand what the Lord's will is". In other words,  Be careful and full of biblical wisdom and encouragement to others because GREATER is the Lord Jesus Christ, Who is in us who are saved, than that thief whose only job is to destroy as many souls as possible, until King Jesus defeated him at the Cross!