THINK ON THESE THINGS - FRIDAY 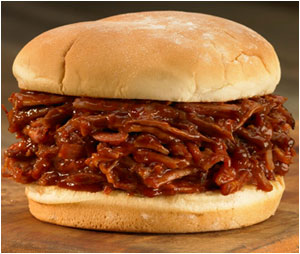 PULLED PORK OR VEGGIE SANDWICH?
One [man's faith permits him to] believe he may eat anything, while a weaker one [limits his] eating to vegetables...Romans 14:2 AMP (as we continue in our Daily Look at each verse in Romans 14)


We have all heard the anecdotes about some of our Jewish brethren, who upon receiving a saving "heart knowledge" of the Lord Jesus, desire to eat ham sandwiches to show they are no longer under the Law! This was the Old Testament regulation to Jews to have nothing to do with eating any pork products!


God Almighty Himself changed His own regulation as He exhibited in the Book of Acts 10: 10-16 when He showed Peter a wide range of animals, which he, Peter, could/should use as food! Having grown up under strict Jewish Kosher Dietary Laws, Peter naturally declined. The LORD told him to never call unclean, that which God has ordained.


Therefore, while we Bible Believing Christians have the right to eat, wear and drink or partake of any activity we like, we must be discerning. If our eating a ham sandwich or a huge tasty summer barbecue pulled pork sandwich will offend a new Christian or a brother/sister in the Faith - DO NOT DO IT!

If you going into a Hooters will cause a 23 year old immature christian to stumble, because you think you "like their chicken wings" - DO NOT DO IT!!


If wearing a certain T Shirt or mentioning a particular music group to a group of teens could cause one of them to go astray, out of curiousity about something you said - DO NOT SAY IT!!!

Use some common sense! This is all this verse is saying. If a new Christian is so overwhelmed with joy that he wants to share a cheese or veggie pizza with you, what's wrong with that??!!! Go and fellowship and share Jesus! The body is MORE than food and drink. Just because you think if you don't get pepperoni and sausage, you will surely perish - you won't!!  How much meat do you think the Disciples ate with Jesus - not much! They were fortunate most of the time to have plain flatbread or some fruit.


So be like Paul, who wrote the book of Romans here. He became all things to all people, that some may be saved...while at the same time - DO NOT SIN!