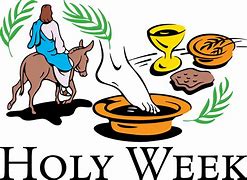 This entire Holy (or Passion) Week was filled with stunning events which have stood the test of time for almost 2000 years. For it is on this week, that Jesus first over turned the corrupt religious High Priest Annas' money tables in the Jerusalem Temple on Monday, to the teach of the Parables and more on Tuesday (see below).

On the day before the Passover of Holy Week, which the Lord Jesus celebrated with His disciples, the Gospel of Matthew records the betrayal of Jesus by Judas for 30 pieces of silver. This day of rest for Jesus in Bethany, also saw the woman anoint His feet with the expensive jar of Alabaster oil.

Then Jesus went into the temple [d]of God and drove out all those who bought and sold in the temple, and overturned the tables of the money changers and the seats of those who sold doves. And He said to them, “It is written, ‘My house shall be called a house of prayer,’ but you have made it a ‘den of thieves.’ ”

Then on Holy Tuesday, some of these same priests tried to lay a trap for Him.

“Hear another parable. There was a master of a house who planted a vineyard and put a fence around it and dug a winepress in it and built a tower and leased it to tenants, and went into another country. When the season for fruit drew near, he sent his servants[c] to the tenants to get his fruit. And the tenants took his servants and beat one, killed another, and stoned another. Again he sent other servants, more than the first. And they did the same to them.

Finally He sent His Son to them, saying, ‘They will respect My Son.’  But when the tenants saw the Son, they said to themselves, ‘This is the heir. Come, let us kill Him and have His inheritance.’ And they took Him and threw Him out of the vineyard and killed Him. When therefore the owner of the vineyard comes, what will He do to those tenants?” They said to him, “He will put those wretches to a miserable death and let out the vineyard to other tenants who will give Him the fruits in their seasons.”

And again Jesus spoke to them in parables, saying,  “The kingdom of heaven may be compared to a king who gave a wedding feast for His Son, and sent His servants  to call those who were invited to the wedding feast, but they would not come. Again He sent other servants, saying, ‘Tell those who are invited, “See, I have prepared My dinner, My oxen and My fat calves have been slaughtered, and everything is ready. Come to the wedding feast.”’  But they paid no attention and went off, one to His farm, another to his business, while the rest seized His servants, treated them shamefully, and killed them.

The king was angry, and he sent his troops and destroyed those murderers and burned their city. Then He said to His servants, ‘The wedding feast is ready, but those invited were not worthy.  Go therefore to the main roads and invite to the wedding feast as many as you find.’  And those servants went out into the roads and gathered all whom they found, both bad and good. So the wedding hall was filled with guests.

“But when the king came in to look at the guests, He saw there a man who had no wedding garment.  And He said to him, ‘Friend, how did you get in here without a wedding garment?’ And he was speechless. Then the king said to the attendants, ‘Bind him hand and foot and cast him into the outer darkness. In that place there will be weeping and gnashing of teeth.’  For many are called, but few are chosen.”

When Jesus had finished all these sayings, He said to His disciples,  “You know that after two days the Passover is coming, and the Son of Man will be delivered up to be crucified.”

Then the chief priests and the elders of the people gathered in the palace of the high priest, whose name was Caiaphas,  and plotted together in order to arrest Jesus by stealth and kill Him.  But they said, “Not during the feast, lest there be an uproar among the people.”

Now when Jesus was at Bethany in the house of Simon the leper, a woman came up to Him with an alabaster flask of very expensive ointment, and she poured it on his head as he reclined at table. And when the disciples saw it, they were indignant, saying, “Why this waste?  For this could have been sold for a large sum and given to the poor.”

But Jesus, aware of this, said to them, “Why do you trouble the woman? For she has done a beautiful thing to Me.  For you always have the poor with you, but you will not always have Me.  In pouring this ointment on my body, she has done it to prepare Me for burial.  Truly, I say to you, wherever this gospel is proclaimed in the whole world, what she has done will also be told in memory of her.”

Then one of the twelve, whose name was Judas Iscariot, went to the chief priests  and said, “What will you give me if I deliver Him over to you?” And they paid him thirty pieces of silver. And from that moment he sought an opportunity to betray Him.

READ MORE ABOUT HOLY TUESDAY HERE FROM THE BOOK OF MATTHEW