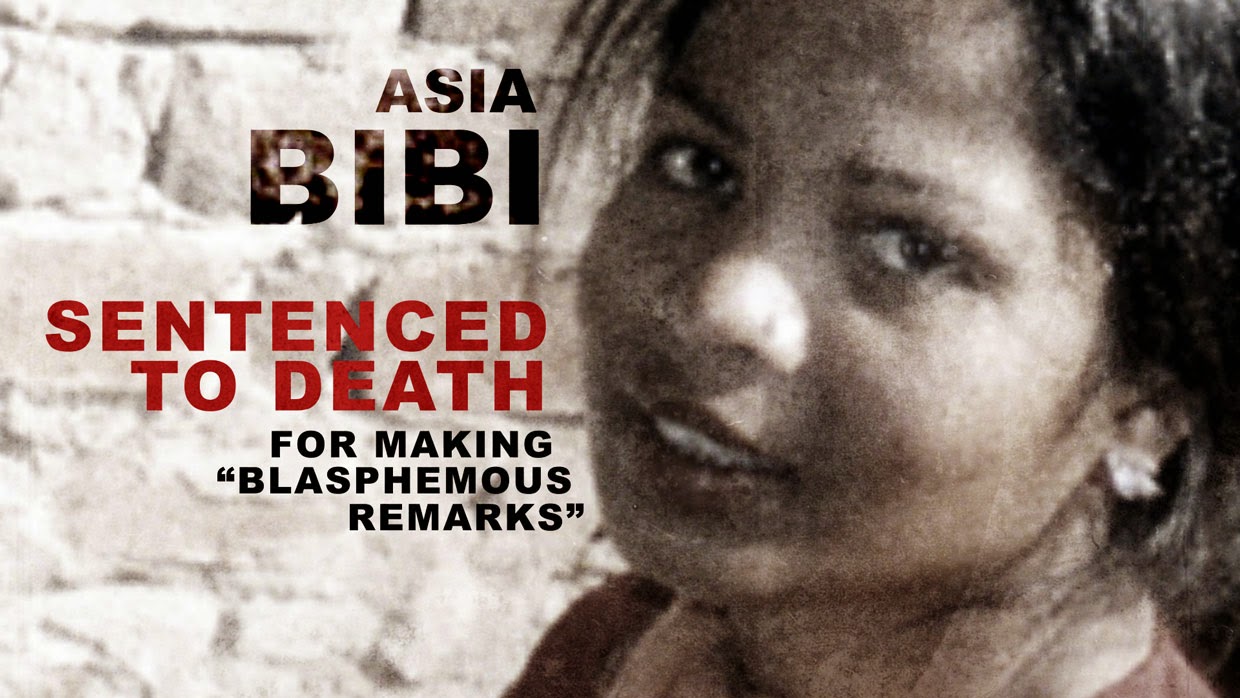 ITEM 1 - Pray for Asia Bibi (seen in photo). Asia is a brave young Christian woman who was charged with "blasphemy" by the men of Pakistan, for declaring the following statement: "Our Christ is the true prophet of God,” she reportedly told the women, “and yours is not true.” She was working for a wealthy muslim land-owner in Pakistan at the time (in 2009) when she got into an argument over faith with several other women. They had been trying to convert her to islam, by force. She was arrested, tried in a religious kangaroo court and sentenced to death in 2010 for stating the obvious about our Lord and Savior Jesus Christ.  Her appeal went forth and four years later, on October 16 2014, it was thrown out of the Pakistan High Court. There is another appeal but it could take months or up to four years. In the meantime, word is that she is depressed, very depressed at the news, as she is still incarcerated for her faith.

ITEM 2 - Pray for Christians still under attack from Boko Haram in Nigeria. There are still kidnappings and church/village burning of Christian territories going on. 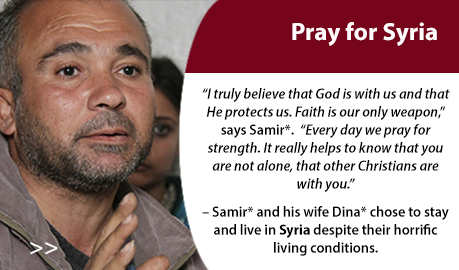 ITEM 3 - This is a positive item to pray for. Mark Burnett and his wife Roma Downey, who created the blockbuster "Bible" TV series, have just launched a massive $25 million dollar campaign to provide hands on help to Iraqi and Syrian Christians as winter quickly approaches. They have the surprising assistance of King Abdullah of Jordan, in this project of love in action! Their goal is to assist fellow believers in the "Cradle of Christianity". Several regional Christian leaders - from Archbishops in Syria to the Chaldean Christian Leadership - displaced after the fall of Saddam Hussein in 2003 - are assisting in getting this moving ahead! Click here to read more on this but also pray for this goal to be attained as even $25 million is not enough to help clothe, feed and take care of hundreds of thousands of our brethren who were chased out of their 2000 year old homes, by the radical extremists now controlling the headlines and the deserts.

FATHER GOD, WE LOVE, PRAISE, ADORE, MAGNIFY, GLORIFY AND LIFT UP THE NAME OF JESUS - ABOVE ALL ELSE. HE IS THE ONE TRUE PROPHET OF GOD, THE KING OF HEAVEN, THE JUDGE OF JERUSALEM, THE UNITER OF THE UNIVERSE, THE EMPEROR OF THE EASTERN SKY AND THE ANCIENT OF DAYS, WHO WAS, AND IS AND IS TO COME. WE HUMBLY CAST OUR LIVES AND SERVICE AT HIS FEET IN SERVICE TO HIS KINGDOM

FATHER WE PRAY THIS MORNING FOR THIS ONE BRAVE WOMAN IN PAKISTAN AND SISTER IN CHRIST ASIA BIBI. LORD, JUST LIKE THE PASTOR WHO WAS MARTYRED INSIDE OF A POLICE STATION IN PAKISTAN, AND MANY OTHERS INCLUDING YOUNG CHILDREN, ASIA HAS STOOD STRONG ON THE TRUTH OF THE GOSPEL AND IS NOW IN DANGER OF LOSING HER LIFE FOR IT. LORD COMFORT HER NOW IN HER DEPRESSION AS EVEN THE STRONGEST FEEL ALONE AT TIMES LIKE THIS, INCLUDING JOHN THE BAPTIST. GIVE HER COURAGE AND MORE OF THAT BLANKET OF SHALOM THAT PASSETH ALL UNDERSTANDING, IN JESUS' NAME.

WE PRAY ALSO FOR CHRISTIANS IN NIGERIA AND THE SURROUNDING AFRICAN COUNTRIES WHO ARE INCREASINGLY UNDER ATTACK FROM THE EXTREMIST MILITIAS OF BOKO HARUM WHILE THE WORLD'S EYES ARE ON THE MIDDLE EAST.  AND FATHER, WE PRAY ALSO FOR ROMA DOWNEY AND MARK BURNETT THAT YOU NOT JUST PROSPER THEIR WORK TO GET THE BIBLE OUT THROUGH TV AND THE MOVIES, BUT THAT YOU BE WITH THEM IN THIS LAUNCH OF A PROJECT TO RAISE OVER $25 MILLION TO HELP YOUR SAINTS - THE IRAQI AND SYRIAN CHRISTIANS, IN THE CRADLE OF CHRISTIANITY, TO SURVIVE THE COMING WINTER. BLESS THE KING OF JORDAN AS WELL, WHO IS LIKE CYRUS, WHO BLESSED YOUR PEOPLE ISRAEL DURING THE BABYLONIAN EXILE, EVEN THOUGH HE, CYRUS, DID NOT KNOW YOU PERSONALLY. PROTECT THOSE INVOLVED IN THIS MASSIVE RESCUE MISSION TO HELP THIS DISPLACED AND PERSECUTED BRETHREN WHO HAVE LIVED IN THAT AREA, BEFORE ISLAM WAS EVER CREATED, SERVING YOU AND OBEYING YOU. WE ASK ALL OF THESE THINGS, IN JESUS STRONG AND MIGHTY NAME, AMEN.