SEE YOU AT THE POLE THIS WEDNESDAY SEPTEMBER 25

See You at The Pole (SYATP) is a student led prayer movement on the fourth Wednesday every September, where Christian students gather around the US Flag pole of their local schools to pray, before the start of the day's classes. While many atheists groups and politicians have tried to stop SYATP in the past, this is a constitutionally protected activity under the First Amendment.

SYATP began in 1990, as a response to the loss of Religious Freedom and hostility to Christians in the public school, and has spread worldwide to all of western Europe, and some parts of Canada, Africa and the South eastern continents. Millions of students, and in some cases, teachers (in their own personal private capacities) are involved.

Students have several things to worry about and be concerned in prayer and we, as adults should encourage them to pray about all of these weighty matters. Because of the mess America and the world leaders have made of this world, the future for most young people has almost been destroyed. This dying world is under the influence and rule of Satan, while God's remnant still operates freely for the most part. The answer to today's problems is still the Hand of The Lord guiding each and every person.
RECOMMENDED PRAYER LIST FOR SYATP 2013 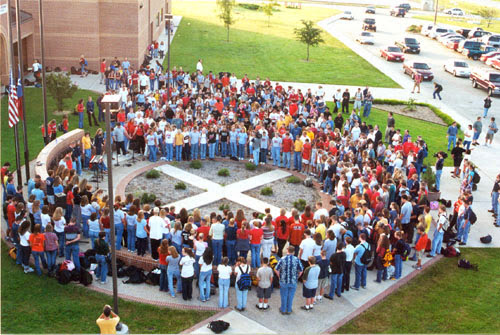 So the prayer list should begin in earnest with the following and in order:
- Praise and Thanksgiving for Life, and Liberty
- Thanksgiving, even in the face of persecution by national leaders and even fellow so-called "Christians" and other religions, that Jesus Christ is STILL THE CREATOR AND THE MESSIAH AND SAVIOR OF THE WORLD!
- Thanksgiving that He was born as a man, lived a sinless life, ministered and gave us life's rules for three years, was persecuted Himself, nailed to a Cross, died for our sins, rose from the dead and is seated on the Right Hand of God where He reigns forever and prayers for His Elect, as Prophet, Priest and King.
- Pray for those persecuted Christians murdered by islam in Pakistan, Kenya, Syria and Nigeria this week while the western church stays silent.
- Pray for their school year and for Godly teachers, who even if they are not saved, will not openly rebel against God and try to promote ungodly agendas.
- Pray for their own spirit protection during the school day and for their fellow students' well-being, good health, joy and their own friends' salvation.
- Pray for their parents and their homes to be places where Christ is Lord and the ruler of that home.
- Pray for their future and their plans as they study and think about careers.
- Pray for their own well-being, safety, peace and strength with the heavy loads of homework put upon them each day.
- Pray for their Personal Purity in an evil and perverse generation, and to be able to stand against the culture, for such a time as this.

There will be cities, towns and other liberal enclaves, where this legal and constitutional activity will be under attack. Students will be mistakenly told that have no right or legal authority to do this. They do. If there are any questions about See You at the Pole or any school or town official who tells a student they cannot meet at the flagpole on Wednesday morning, a list of the Student's Rights and FREE legal advice was made available by the American Center for Law and Justice (ACLJ) website. Click here for more information, but here are the major points:

The ACLJ supports the right of students (and in many instances, parents and teachers) to gather on public school campuses to exercise their constitutionally protected right to free speech and religion through prayer, particularly at See You at the Pole events.  See You at the Pole is a student-initiated and led prayer movement in which students from elementary schools to colleges gather around their school flagpole to pray on the fourth Wednesday of September. The Supreme Court has consistently upheld the students’ right to express themselves on public school campuses, even within group contexts similar to See You at the Pole, stating that “[n]either students [n]or teachers shed their constitutional rights to freedom of speech or expression at the schoolhouse gate.” Tinker v. Des Moines Independent Community School District, 393 U.S. 503, 506 (1969).

Student prayer, including prayer at See You at the Pole events, is a protected form of speech that school officials may not ban. In Board of Education v. Mergens, the Supreme Court interpreted the Equal Access Act and held that Bible clubs and prayer groups have the right to meet on public secondary school campuses that receive federal funding during non-instructional time to the same extent that any other non-curricular clubs are permitted to meet on campus. 496 U.S. 226, 247 (1990). Thus, if such federally funded schools permit non-curricular clubs such as Interact, Zonta, 4-H, Chess Club, and other service-type clubs to meet and hold events on campus, those schools must also permit See You at the Pole events to the same extent.

So long as a student’s conduct does not “materially or substantially interfere with school discipline,” Tinker, 393 U.S. at 504 (quoting Burnside v. Byars, 363 F.2d 744, 749 (5th Cir. 1966)), students may gather together on campus for prayer even if no Bible Club has been officially recognized. Public school students may also bring Bibles, wear Christian t-shirts, and even share their faith, including passing out pamphlets and tracts about Christ to peers on campus. See Murdock v. Pennsylvania, 319 U.S. 105, 108-09 (1942) (“[D]istribution of religious tracts is an age-old form of missionary evangelism . . . . This form of religious activity occupies the same high estate under the First Amendment as do worship in the churches and preaching from the pulpits.”). Moreover, the U.S. Department of Education requires every public school that receives federal funding to certify “that it has no policy that prevents, or otherwise denies participation in constitutionally protected prayer in public schools,” including “‘see you at the pole’ gatherings before school.” U.S. Dept. of Educ., Guidance on Constitutionally Protected Prayer in Public Elementary and Secondary Schools 68 F.R. 9646 (Feb. 28, 2003) (hereinafter “Guidance”), available at, http://www.ed.gov/policy/gen/guid/religionandschools/prayer_guidance.html (last visited Mar. 11, 2011).

School officials, however, may impose reasonable, non-discriminatory regulations that govern the time, place, and manner of student activities. See, e.g., Chandler v. Siegelman, 230 F.3d 1313, 1317 (11th Cir. 2000) (Government “may neither prohibit genuinely student-initiated religious speech, nor apply restrictions on the time, place, and manner of that speech which exceed those placed on students’ secular speech.”). Such regulations cannot target the religious content of the student activity, must be narrowly tailored to serve a significant government interest, and are required leave open other alternative forms of communication.