THE NATIONAL CATHEDRAL VS THE BIBLE 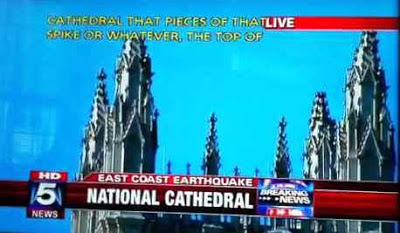 EZEKIEL PROPHESIES TO.....AMERICA?
And the word of the LORD came to me: “Son of man, say to her, You are a land that is not cleansed or rained upon in the day of indignation. The conspiracy of her prophets in her midst is like a roaring lion tearing the prey; they have devoured human lives; they have taken treasure and precious things; they have made many widows in her midst.
Her priests have done violence to my law and have profaned my holy things. They have made no distinction between the holy and the common, neither have they taught the difference between the unclean and the clean, and they have disregarded my Sabbaths, so that I am profaned among them.
Her princes in her midst are like wolves tearing the prey, shedding blood, destroying lives to get dishonest gain.
And her prophets have smeared whitewash for them, seeing false visions and divining lies for them, saying, ‘Thus says the Lord GOD,’ when the LORD has not spoken. The people of the land have practiced extortion and committed robbery. They have oppressed the poor and needy, and have extorted from the sojourner without justice. And I sought for a man among them who should build up the wall and stand in the breach before me for the land, that I should not destroy it, but I found none. Therefore I have poured out my indignation upon them. I have consumed them with the fire of my wrath. I have returned their way upon their heads, declares the Lord GOD.” (Ezekiel 22:23-31 ESV)

Of course, this is Old Testament, but to those "enlightened" ones, in their age of "reason", this means nothing? This past week, the official symbol of Faith in America - the National Cathedral - boldly and unapologetically announced they will be conducting same-sex "marriages" inside of the church....and then went on to use the Name of Jesus and God....just as God said of the worthless priests of Judah (Jerusalem etc) in the passage above from Ezekiel! The liberal apostates of the US Episcopal Church (which is out of fellowship from the wider body of the Biblically sound Anglican Church) have been likewise travelling down a road of rebellion against God and the Bible, for decades now.

It is not up to me, however to condemn them...or anyone else for that matter. The Word of God has taken care of that, as we see above and the entire portion of Ezekiel from Chapter 18 onward. By the way, just in case so-called Christians dispute the Old Testament, here in context, is what the Apostle Paul says in 1 Corinthians why we must heed the Full --- the FULL---Counsel of God, from beginning to end:
"Now these things took place as examples for us, that we might not desire evil as they did. Do not be idolaters as some of them were; as it is written, “The people sat down to eat and drink and rose up to play.” We must not indulge in sexual immorality as some of them did, and twenty-three thousand fell in a single day. We must not put Christ to the test, as some of them did and were destroyed by serpents, nor grumble, as some of them did and were destroyed by the Destroyer. Now these things happened to them as an example, but they were written down for our instruction, on whom the end of the ages has come. Therefore let anyone who thinks that he stands take heed lest he fall. (1 Corinthians 10:6-12 ESV) 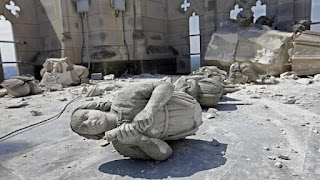 On August 23, 2011, just days before there was supposed to be an Inter-Faith "Service" at the National Cathedral (for the 10th Anniversary of 9/11/2001), in Washington DC, a rare and unusual earthquake hit the city and its surroundings. The earthquake registered 5.8 on the Richter Scale and did some serious damage to the Cathedral's structure. The damage was so bad, they needed $20 million to repair everything from the foundation to the spikes at the top. Here they are, less than two years later, shaking their fists at the God of the Bible again. They may wish to reconsider, repent and read His Word again!

Wow, thanks for this post Brother B! I had not made the connection between the earthquake and the cathedral's stance on gay marriage two years later. In light of my recent reading of The Harbinger, this is definitely more food for thought.

Bless you, oh wise one...and I mean that sincerely!! There is nothing new under the sun! The more things change, they more they stay the same! Men is inherently evil, and will remain so until redeemed by the Second Coming of Christ - that is - those who believe and trust in Him as Lord and Savior like you and Ellie and the Ya Yas - and me! ha!
The key is learning to read the Sign of the Times and letting the Holy Spirit lead us to the Scriptures- and the Old Testament has MORE end time prophesies than Revelation! Revelation just describes HOW it is happening... the OT Prophets tells is WHAT is going to happen! :)
BLESS YOU!