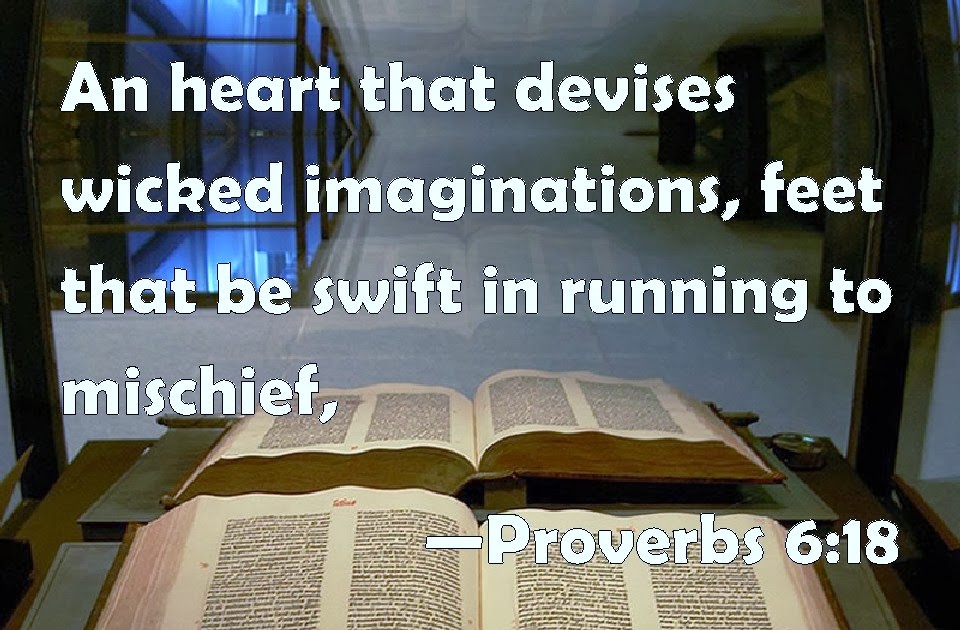 This entire concept (of a "devious heart") goes completely against every western concept that we are really "good people". You would never hear about the "fallen nature" of man, or corruption of the human race; or even the word "sin". Nobody, in these days of extreme political correctness would even think they (you and I) were born with a devious heart.
Proverbs 6:16-19 New King James Version (NKJV)
These six things the Lord hates,
Yes, seven are an abomination to Him:
A proud look,
A lying tongue, hands that shed innocent blood,
A heart that devises wicked plans,
Feet that are swift in running to evil,
A false witness who speaks lies,
And one who sows discord among brethren.
Yet, the Creator Who made us, recognizes every single one of us as not just capable of unimaginable evil, but possessing a bent towards it. Jesus Christ, God Who became Man said as much in Mark 7:21 "For it is from within, out of a person's heart, that evil thoughts come--sexual immorality, theft, murder,"  This is the outflow of the Adamic or sinful nature which each human is born with.

Mark is the first book of the New Testament ever written and it was dictated to him by the Apostle Peter himself - an eyewitness if there ever was one. Peter is an interesting study of a man who was sold out to Jesus, the Disciple of Disciples and all that. Yet, the same man who cut off Malchus' ear trying to defend Jesus from the Temple Guard was denying Jesus three times, outside that same temple as the religious leaders captured Him for their kangaroo court.

Jesus also spoke of the evil of the heart further in Matthew 13:15 and just about described every human being ever born, before the Spirit and Power of God delivered you and I from spiritual wickedness and eternal death! The Messiah said "For this people's heart has become calloused; they hardly hear with their ears, and they have closed their eyes. Otherwise they might see with their eyes, hear with their ears, understand with their hearts and turn, and I would heal them.'"

This is never more evident when you watch the filth and degradation coming out of American culture today. Take one look at any American TV award show to see the depths of depravity of western "humanity". The recently concluded 2014 Grammy Awards is Exhibit A. We saw everything God described in Ezekiel 16:48-50 as to WHY He destroyed Sodom and Gomorrah. Read on:
"As I live," declares the Lord GOD, "Sodom, your sister and her daughters have not done as you and your daughters have done. Behold, this was the guilt of your sister Sodom: she and her daughters had arrogance, abundant food and careless ease, but she did not help the poor and needy. Thus they were haughty and committed abominations before Me. Therefore I removed them when I saw it.…

America is modern day Sodom where its wealth, prosperity and power led to such easy living since World War II that we have gone slack in morality and cold in heart towards the Lord. The bad news is that God never changes and He has seen this before....thousands of years now. Man, in the wickedness and lust of everything ungodly, make the same mistakes over and over and over ahead.While these mistakes take several forms, which we can talk about for volumes, the underlying issue is Sin. While we are not allowed to talk about it in modern culture and even most modern churches, that too has never gone off the Lord's Radar....and He will punish it!

To help us avoid this trap of an evil and devious heart, which rebels against God, let us see briefly the sequence of events of Sin and how we can avoid it.
1. The world, the flesh and Satan throws temptation in our faces blatantly or subtly which triggers a thought and desire for that thing or person.
2.  Depending on the current condition of your walk with Jesus and where one is in the process of Sanctification, that thought or desire will trigger two things - either you will seek to gratify your own flesh no matter the cost OR you will be so disgusted that everything the Lord taught you will kick in and you will RUN away immediately (like Joseph and Potiphar's wife).
3.  If you choose the Biblical "RUN" option, you and I are in the clear. But here is what happens if you do NOT consider the cost of fulfilling that temporary lust of the flesh and discipline yourself - your heart will lie to you! YES! Your pride (sin #1 here) will like (sin#2)  and tell you that you "really deserve this. God is keeping him or her from you....or that new Mustang (which will put you $40,000 further in debt)....you deserve this....you work hard", And how about this one "you won't get caught"!!! DOES ANY OF THIS SOUND FAMILIAR?! THIS IS SATAN TEMPTING EVE IN THE GARDEN IN GENESIS 3!!
4.  Failure to run and instead listen to Satan and the flesh and your own wicked heart will result in death. If not immediate physical death, then death of purity...death of a clear conscience...death of a vibrant relationship with your spouse or the bank or worse - GOD!

This is where a prideful wickedly devious heart can lead a person. While God's grace extends to the Christian who sins and fall like this, there is a loss of eternal reward and the spiritual blessings in the eternal kingdom to come. This is the end result of the devious heart. This will work out in the end for the person who has been truly saved, but we should worry about those who walk in constant wickedness, such as we see on full display - not just out of Hollywood, but in our local schools; state capitols and all the way to the top of business and politics.

The only cure to make a heart right is to cry out to God, through Jesus Christ for Him to "open the eyes of your heart"! Great title for a song, as well as good theology like this will focus us on what is truly important - Salvation and getting your own heart, and mine, right with God. While Repentance may be a bad word today, it is still the only road to righteousness - from a Devious Heart!