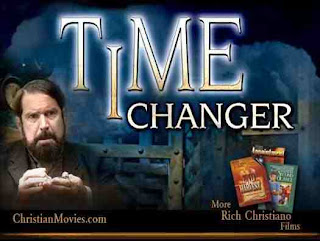 AN INDICTMENT OF MODERN CHRISTIANITY?
In 2002, Christian movie producer Rich Christiano released his first full-length movie TIMECHANGER which starred a number of well known Hollywood actors – Gavin McLeod (Loveboat); Hal Linden (Barney Miller); Richard Riehle (West Wing); Jennifer O’Neill (Summer of ’42); Comedian Paul Rodriguez and more. With a budget of less than $1M, TimeChanger told a story of Professor Russell Carlisle (D. David Morin) and one missing phrase from his book manuscript. In the plot, Professor Carlisle works at Grace Bible Seminary in the year 1890. He is seeking the unanimous approval of the Seminary trustees to publish his book….that is, until Dr. Norris Anderson (MacLeod) objects over the omission of the Name of Jesus Christ.  Civilized arguments ensues as Dr. Carlisle defends what he sees as the harmless teaching of “good moral values” for life, but which Dr. Anderson sees as worthless without mention who gave these moral laws for living – Jesus Christ.

To prove his point to an obstinate Dr. Carlisle, Dr Anderson invites him to the latter’s home to see something which will prove the latter’s reluctance to approve a book which he knows will add to the decline of Christianity in the future, is correct. Apparently, Dr. Anderson’s father had developed a time travel machine, which was now perfected. He then persuades Dr. Carlisle to allow himself to be sent 100 years into the 21st Century for the experience of a lifetime! What Dr. Carlisle observes is the current corrupt state of the American church; Christianity and society in general.

From a time (1890) when an outrageous 5% of marriages ended in divorce, he is told that now over 50% of marriages today end in divorce. He sees Christians partaking in cultural rut gut as they sit silent at movies where God is blasphemed! Just as horrible, is the current state of the church. The professor sees program after program or one activity after another there, yet the full counsel of God is not preached or taught or walked out. Dr. Carlisle sees the lack of enthusiasm and passion for lost souls in a modern mega church and it shocks him.

What is shocking about this 2002 movie which we showed to the community at the end of February,  is how much ahead of its time that TimeChanger really is, in 2013!  I did mention this to its producer Rich Christiano, who has gone on to make several powerfully sound Biblical modern dvd favorites (Secrets of Jonathan Sperry; Amazing Love etc) whose work can be found on his Christian Movies website. (Christiano has managed to get a lot of mainstream Hollywood actors/actresses to be in his movies, which have increased their appeal.)  As you watch this film, you cannot help but find yourself looking into a mirror to see how much of yourself is being portrayed on the screen – at that time! The script is prophetic and very well written by Christiano.

Initially, the viewer may have some trouble picking up why a group of senior looking men are refusing to agree to publish a book by the younger professor, who then tries to do an unchristian thing and go around the endorsement panel. However once the confused Dr. Carlisle is transported 100 years into the future, an unsettling (and at times, amusing) adventure begins. One scene should make all Christians cringe. There is a scene where Dr. Carlisle has bought a hotdog, sat down to pray for his food, closes his eyes to pray only to have a little girl steal his food and run off with it. When she is finally caught and told that it is wrong to steal, her immediate response is “SAYS WHO?” This eye opening comment makes Dr. Carlisle finally realize that apart from teaching WHO said all of those commandments and statues were wrong, morality is relative! In fact, the movie demonstrates just how Satan has deceived the world. He will even allow his conqueror Jesus to be called a “moral” teacher rather than the Lawgiver of Heaven and the Savior of the World.

What this movie shows is the folly of the modern church – almost every church and/or ministry – in focusing on the people running it, in focusing on secular pursuits dressed up in a bible, in focusing on activity rather than checking on their people being saved  and more. The photography; editing and writing are up to par for any movie made in the early part of the 21st century.  TimeChanger is really important for anyone who cares about how far down the gutter America and its culture have fallen. We will be convicted – each of us – for going along with the culture; watching its blasphemy and perversion and for thinking it has no effect on the soul of a nation. The stunning final message by Dr. Carlisle to a hushed church is the most uncomfortable part of TimeChanger for any true believer. A true and faithful believer would immediately recognize that this is the accusation Jesus Himself will have against the church, its leadership and some of His so-called followers on Judgment Day.

TimeChanger is recommended for those who are searching for the Truth and how to get back into alignment. It is very well written and the humor of Paul Rodriguez and others make for an easy night out with the family and some popcorn. This is also recommended as for those who are faithful to the Lord and are looking for His Second Coming.


TIMECHANGER is recommended as the movie for such a time as this!

READ TWINAS LATINAS MAGAZINE FOR MORE ON MOVIE REVIEWS!
Posted by The Bernie Lutchman Blog at 3/02/2013