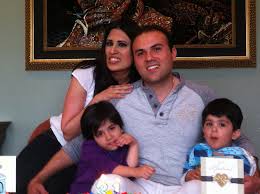 "For to you it has been granted for Christ’s sake, not only to believe in Him, but also to suffer for His sake" Phil 1:29

Your heart has to be broken by the statement of American Pastor Saeed Abedini, now being martyred by the sons of Ham and Ismael in Iran, for being a Christian. One angle not discussed much by the ordinary US christians who are supporting and praying for him is the effect all of this persecution is having on his children.Saeed's wife Naghmeh said in testimony in front of the US House of Representatives in Congress on Friday March 22 that she did not have the heart to tell them that if we don't do anything, that daddy might never survive the horrific Evin prison. I do not have the heart to tell them of the 8 year sentence. "I do hope we can work together to bring Saeed home and I will never have to tell my kids of the dire situation their father is in."
(Read the entire article here: Read more at http://www.christianpost.com/news/pastor-saeeds-wife-no-heart-to-tell-kids-daddy-might-never-survive-92050/#3S6GVzWO2mYsdulp.99 )

It is bad enough that it is only now that the US government is paying lip service to this situation and there is no mention of this criminal abuse from the entire pagan America mainstream media, from its New York - DC Axis (NBC, ABC, CBS, CNN and its newspapers). But this is really troubling -s the position of corrupt American Christianity.

Where are American Christians and their famous leaders calling for fasting and prayer for this brothers and others like him worldwide? Where are they? Maybe, they're waiting for the latest movie to come out on Netflix, while their kids do the "Harlem Shake" in "youth group" at church.......
Posted by The Bernie Lutchman Blog at 3/26/2013