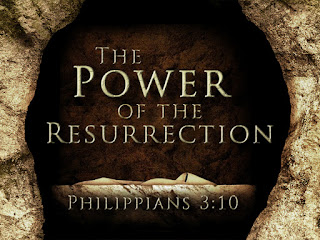 Martina McBride had a big hit years ago called "INDEPENDENCE DAY" and the kicker line was "Let Freedom Ring". Nothing says that better than Galatians 5:1 where the LORD says "It was for freedom that Christ set us free; therefore keep standing firm and do not be subject again to a yoke of slavery".

All of this Freedom and Independence and standing firm etc. are only possible because of one thing - The Resurrection of Jesus Christ from the abode of the physically dead. He was NOT spiritually dead. He is God. The Resurrection, on the Third Day from His willing death on the Cross to remove the sting of death from us, is what makes it possible for us to live with Hope and Joy on this side of Eternity.

Easter Sunday, or Resurrection Sunday, is more significant than even Christmas because this is the one which immediately affects our own personal destination. Easter Sunday is celebrated almost the same in homes across the Western World, with minor cultural food or music differences. However the message remains the same - Jesus is alive, just as He said He will be!! There is never any doubt. God speaks, we listen.

As we have been doing over this past days, we present the Word of God in pure straight form, without comment, to show how the Bible not only speaks for itself but predicts with precision...even thousands of years in advance. With that in mind, here are some verses for us to be grateful, at this time when Jesus guaranteed our waking up into Heaven when we pass from this world to the next! Thank You, Lord, for Your blessings on me!


VERSES ON THE RESURRECTION - "EASTER IN THE BIBLE"
OLD TESTAMENT:
JOB 19
“As for me, I know that my Redeemer lives, and at the last, He will take His stand on the earth. “Even after my skin is destroyed, yet from my flesh, I shall see God (verses 25-26).

ISAIAH 26
Your dead will live; their corpses will rise. You who lie in the dust, awake and shout for joy, for your dew is as the dew of the dawn, and the earth will give birth to the departed spirits (verse 18).

DANIEL 12
Many of those who sleep in the dust of the ground will awake, these to everlasting life, but the others to disgrace and everlasting contempt. (verse 2)

LUKE 24
On the first day of the week, very early in the morning, the women took the spices they had prepared and went to the tomb. They found the stone rolled away from the tomb, but when they entered, they did not find the body of the Lord Jesus. While they were wondering about this, suddenly two men in clothes that gleamed like lightning stood beside them. In their fright, the women bowed down with their faces to the ground, but the men said to them, “Why do you look for the living among the dead? He is not here; he has risen! (verses 1-5)

ACTS 1
To these He also presented Himself alive after His suffering, by many convincing proofs, appearing to them over a period of forty days and speaking of the things concerning the kingdom of God (verse 3).

ACTS 4
And the congregation of those who believed were of one heart and soul, and not one of them claimed that anything belonging to him was his own, but all things were common property to them.  And with great power, the apostles were giving testimony to the resurrection of the Lord Jesus, and abundant grace was upon them all. For there was not a needy person among them, for all who were owners of land or houses would sell them and bring the proceeds of the sales (verses 32-34).

1 CORINTHIANS 15
After that, He appeared to more than five hundred brethren at one time, most of whom remain until now, but some have fallen asleep; then He appeared to James, then to all the apostles (verses 6-7). 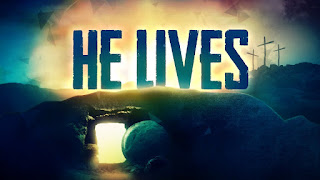 There are many other verses, to which we should devote ourselves in Bible study, but suffice it to know that Jesus was not just seen by His disciples and the women who followed and ministered to His food and clothing needs, but 500 people in Jerusalem saw His physical body. Later, on Scripture tells us that even some of the Pharisees believed in Him. These were the same men who voted to executed Him!

The Apostle Paul, the great persecutor, and hater of the early Christian church had the most dramatic conversion to Christ. It is because of this stunning event in early church history when he was called Saul of Tarsus, that we have half of the entire New Testament.

The Resurrection changes EVERYTHING. Because Christ rose from the grave, and the Angel blew the stone away, then sat on it, as if to say "get a load of this", we are all set to be at the great "getting up morning in the sky". Glory to His Name! However, this can only happen if we are born-again and converted from the spirit of death and destruction to the instant we are suddenly indwelled by the Holy Spirit of God - the very same Spirit Who raised Jesus from the dead. It was for THIS Freedom, Jesus Christ set us free. Amen.
ROMANS 10:
if you confess with your mouth Jesus as Lord and believe in your heart that God raised Him from the dead, you will be saved; for with the heart a person believes, resulting in righteousness, and with the mouth, he confesses, resulting in salvation (verses 9-10).
Posted by The Bernie Lutchman Blog at 3/31/2018