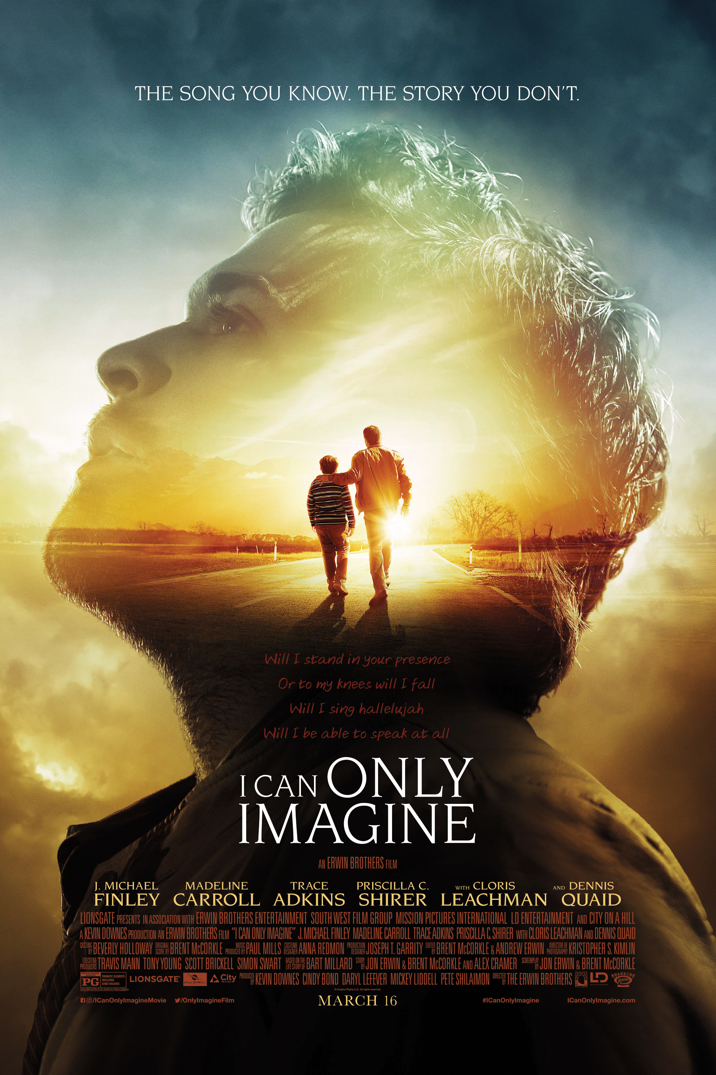 The first time I saw the band Mercy Me LIVE was 15 years ago when WinterJam went through Bloomington, Illinois. Success was wearing very well on lead singer Bart Millard as his mega-hit song “I CAN ONLY IMAGINE”, not only became the biggest Christian hit song of all time, in modern history but was all over the secular radio stations. I mean, who would not want to go to Heaven? The lyrics of this song and the rising melody, combined with expert phrasing made it a perfect balm for the easy listening mainstream radio types.

Fifteen years after the release of the song, I CAN ONLY IMAGINE was made into a full-length feature movie starting some pretty good mainstream stars. Anyone who knows the background of Mercy Me or the story behind the song itself “I Can Only Imagine”, will know it is lead singer’s Bart Millard’s personal life story....to a certain extent.

Growing up an only child in the dusty small Texas town of Greenville, Bart Millard (played in the movie by J. Michael Finley) just barely made out of his teenage years alive, after a lifetime of physical and emotional abuse by a very abusive father. His mother had flown the coop after one too many beatings from Millard’s father. In the soon to be released I CAN ONLY IMAGINE (March 16, 2018), Bart Millard’s father is played by the great Hollywood actor Randy Quaid, who has played in good family movies before. Quaid is completely in character, superb and gave an amazing portrayal of Bart's real-life father.

Purely by accident, Millard was found out to have a powerful singing voice and a lot of talent. After high school football injury sidelined him permanently, he went into music up to and after graduation. Due to the continuing abuse at home, the post-high school Millard, could not wait to get out of his father’s house and go launch what he thought would be a good music career.

Along with three other high school friends, the musical quartet hit the road and with some minor success. In the meantime, Bart was busy doing some emotional abuse of his own. His relationship with his high school sweetheart (now his real-life wife Shannon) was going further south than Galveston, Texas. The movie, expertly done by the Erwin Brothers of Alabama reminds me of another true story spectacular event they produced in recent years called Woodlawn!

If you loved Woodlawn, with its gritty and bold screenplays and acting, you would more than love I CAN ONLY IMAGINE. How this song came to be is incredible in itself. The Bart Millard I once stood next to at the Dallas-Fort Worth Airport early one morning a few years ago, was not the same arrogant young man who ended up writing and performing this multi-million crossover pop/Christian music hit. J. Michael Finley did a great job portraying the Mercy Me lead singer and frontman and throughout the movie. He takes you through a wave of emotions, concerning Bart, from his very sympathetic years through high school, to the unbearable years when the band was in its infancy, to the great man of God, he is today.

There is one very touching (and warm) surprise in I CAN ONLY IMAGINE and you will have to see it to get the full story. Through the Erwin Brothers great story-telling and weaving of the perfect choice of character actors, whether it was Trace Adkins or Randy Quaid or J. Michael Finley as Bart Millard, the viewer is taken on a really inspiring soft roller-coaster ride. It can be emotional at times, so feel free to take your Kleenex. But like all Erwin Bros. movies, there are some great humorous moments. The Erwins are well-known for movies like Mom's Night Out, October Baby and others, apart from Woodlawn.

This is an unsolicited, unpaid or un-anything review. I just loved the movie and predict it to be the biggest Christian movie of the year. It may not bring in the $1 billion that some Hollywood blockbuster would, but this one has something more important than any Hollywood movie- REAL HEART! It has also eternal consequences, as Jesus is boldly proclaimed and it is for the entire family. The Erwin brothers (Jon and Andrew); Producer Kevin Downes (actor from Courageous) and Executive Producer Cindy Bond have made, what could very well be,  the best movie of 2018. We shall see!! God bless.