INSPIRATIONAL SCREENPLAY OF THE YEAR - "THE BEAUTIFUL WORLD": (Interview & Review) 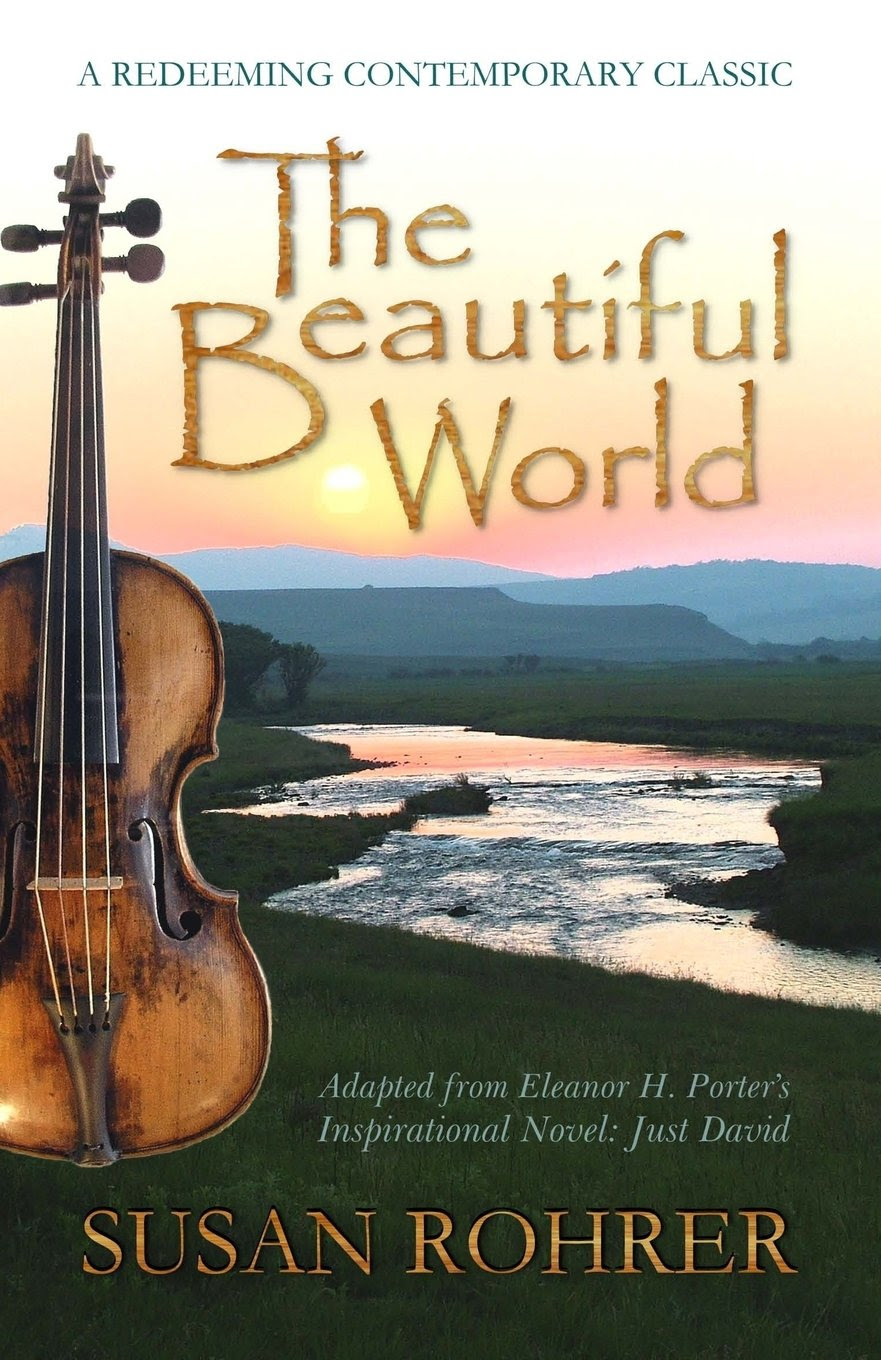 If you’ve kept up with The Write Stuff blog for any length of time, you’ve noticed my posts about the prolific writings of Susan Rohrer, who has enjoyed a multi-faceted, award-winning career as a producer, screenwriter, director, and author in the entertainment and media industries. Most recently, I posed a few questions to Ms. Rohrer about her newest release entitled The Beautiful World.
—Bernie Lutchman

BL:  Why did you choose to adapt Eleanor H. Porter’s original novel Just David into your latest writing project, The Beautiful World?

SR:  First, thanks so much for inviting me to be part of your blog, Bernie. It’s my joy and privilege to share these thoughts with your readers.

When it comes to choosing what stories to tell, I find Philippians 4:8 to be a great yardstick. I ask myself if that story I’m considering would be a vessel of honor, if it’s consistent with what is true, right, pure, lovely, and of good report. Does the story have any virtue? Is it worthy of praise, thought, and the investment of time? Does it have the potential to transform? One person at a time, could it help make this world a better place? Eleanor H. Porter’s stirring story measured up on every level. 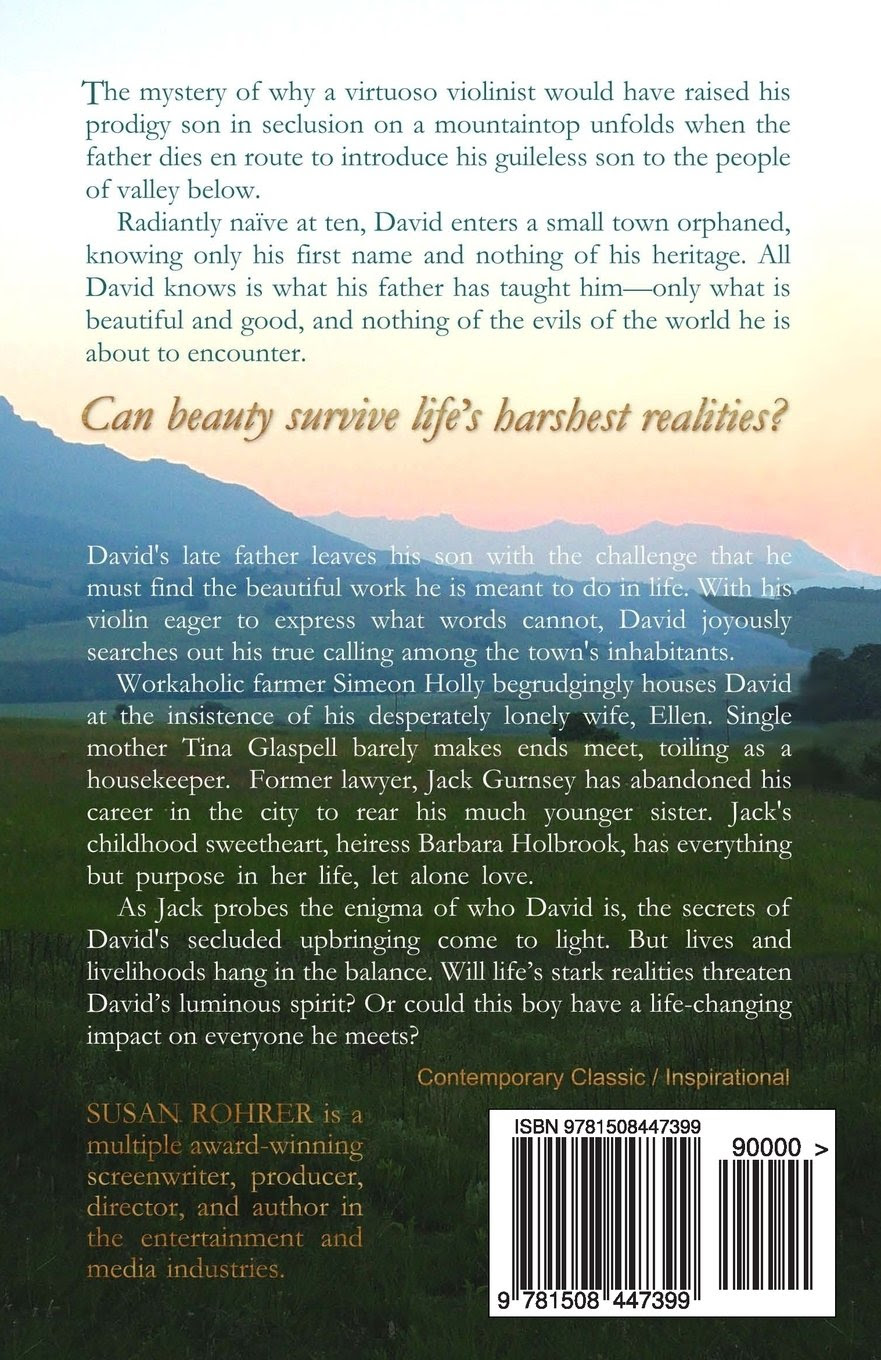 As noted in its subtitle, The Beautiful World is an adaptation of Porter’s inspirational classic, Just David. Since childhood, I’d been familiar with Porter’s most famous work, Pollyanna, and the family film productions it inspired. But I’d never heard of Just David until a dear friend and former co-worker called that gem to my attention. Just David had been even more popular than Pollyanna, ranking as the #2 Bestseller in the USA when it was published in 1916. Those who’ve discovered Just David treasure it, but with no film made, Porter’s tale of David, a guileless violin prodigy, has largely faded from the spotlight of popular culture. Still, from her very first pages, Porter’s timeless story resonated within me. With its universal longing to find meaning in life and its many scriptural allusions, this Gospel-laced allegory evoked deep emotion in me. It made me want to see our troubled world through David’s luminous eyes.


I remember telling my agent at the time about my intent to adapt Porter’s book
into a screenplay. He did his best to discourage this since—in today’s market—dark, edgy, secular scripts are much easier to sell. Still, Porter’s story echoed within me, begging to be told on the screen. So, I wrote the screenplay, updating it into the contemporary milieu, under the title The Beautiful World. Bless him, my agent still circulated the script to a number of production companies. Across the board, praise for the script was high. Some showed interest in getting it funded for production. But though that script opened doors and boosted my credibility as a screenwriter, it has yet to make it to the screen.


Time passed, but that longing remained to bring The Beautiful World to life in some way. Many of my scripts had already been produced, but I had just as many that I loved that hadn’t made it to the screen. Because a number of my scripts took many years to get produced, I continue to do what I can to support that effort. One by one, I began to adapt those orphaned scripts, giving each a home and a new life in novel form. Finally, the time seemed right to novelize The Beautiful World.

BL:  What would you like to accomplish with this dynamic new work?

SR:  I’m so excited at the prospect that this modern retelling will bring Porter’s classic back to the attention of contemporary readers. And maybe, God willing, as the novel takes on a life of its own, it will raise awareness of the screenplay and support the effort to get The Beautiful World funded as a motion picture.

Meanwhile, in novel form, it’s my hope that The Beautiful World will put a mirror up in some way for everyone who reads, that we’ll see ourselves in each of its characters. Of course, as much as we’d hope to see ourselves in David’s idyllic mountaintop experience, we’re more likely to relate to the real world people he meets in the valley below. We might recognize the couple that takes David in, workaholic farmer Simeon Holly and his lonely wife, Ellen. We see ourselves in the Hollys’ farmhand, Perry Larson, or in single mother Tina Glaspell as she toils to feed her kids. Some will resonate with Jack Gurney’s truncated law career and his estrangement from his childhood sweetheart, heiress Barbara Holbrook, a woman who has everything but purpose in her life. Through each of these pivotal characters, I’d like to provoke readers to think about their relationships with work and to how that impacts their relationships with one another. In that sense, I’d like to set each reader on David’s quest, to discover what work of true beauty and value he or she is meant to do in life.

BL:  You have a wonderful gift of placing your readers into the narrative you’re producing. What advice do you have for young authors who may need some experience painting the sounds, smells, and feels a town or a scene, on the canvas of their stories?

SR:  Because realizing characters can be an intensely spiritual process, seeking discernment about each opportunity becomes an important first step. Stand strong in what you believe, no matter how hard the world tries to squeeze you into its mold. Don’t be afraid to pass on something that doesn’t sit right in your spirit. That hesitation you sense might be that still, small voice of the Holy Spirit, whispering that it’s best to invest your time elsewhere. On the other hand, if the project passes the discernment test, the best place to start is by inviting our Creator—the greatest creative mind in the universe—into the creative process. He knows our minds and hearts so well. He knows the human condition each character faces. And He’s a very present help in making each character ring with relatable truth.

As in acting, in writing there’s this process of “going there” and inhabiting that place where each character lives in a profound, internal way. We need to do more than write about a moment. We need to be in that moment. And when we are, a very sensory world opens up inside us. We go beyond merely observing characters objectively to living in their circumstances experientially. We venture to that sensory place where we see, hear, smell, and taste what they do. As we begin to feel what they feel, we pour that experience out on the page. So, go there. Think what your characters think. Notice the things they notice. Laugh with them, cry with them, feel their pains and joys. Above all, acknowledge God in all your works, and as promised, He will direct your paths.

Editor’s Note:  Readers of this blog can get a copy of The Beautiful World by Susan Rohrer at either of the links below.

BOOK REVIEW:
Every once in a while, a literary work bursts forth from the pens of some of our great authors and/or screenplay writers, either packing a wallop that immediately goes straight for the gut, or contains a message gloved in velvet that draws almost every emotion out of you. This new offering by producer/director and prolific author Susan Rohrer actually does both. The unique thing about Rohrer’s new book “The Beautiful World” is that you never see that wallop coming as you go through a series of twists and turns in the plot.

The unique thing about Susan Rohrer’s masterful writing is you never knew what is around the corner. It is a feature of almost all her previous books, most of which have been reviewed on my blog. A la Paul Harvey, by design, the origins of David and “Daddy’s” mysterious home in the mountains posits a quizzical take on this unusual father/son duo and the impact they are about to have on the rest of the story.

Ms. Rohrer’s fast moving plot really picks up speed when Daddy and David come off the mountain to the “valley” (the real world) where life gets messy, complicated and increasingly harsh. New characters are added like the good guy attorney Jack Gurnsey and his circle of friends and family, as well as the hardscrabble farm couple of Ellen and Simeon Holly and their trusted farmhand Perry Larson. The Hollys end up being the sympathetic couple who take the orphaned young violin prodigy David in, after Daddy departs for what David knows as “the far country.” All is not roses for David at this couple’s farmhouse. The Hollys struggle both to make ends meet and pay the mortgage, owed to a man who owns most of their county.

The expertly woven tapestry of this small town drama has the feel of a major motion picture family drama, which could have occurred in any time period of the last hundred years, in Americana.  The emotional roller coaster in “The Beautiful World” will draw you in, make you furious, then make you smile. It will make you sad to the point of bringing out a box of Kleenex. Whatever your taste in books, this one is more than just for a lazy summer afternoon read. It is an experience many will relate to, because there is something in every character with which each of us can resonate.
Posted by The Bernie Lutchman Blog at 8/07/2015