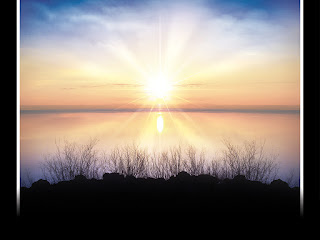 Each New Year's observance and subsequent "new year's" resolutions are sometimes wonderful things to be a part of, but we can have a restart and reboot now or at any time, which is more meaningful, enduring and can actually be maintained than fleeting "resolutions" that are broken six weeks after they are made!

America has always been the country and the Land of Second Chances. Here you can fail, try again...then really blow it, and then really come alive in a brand new city or state, doing the opposite of what you're trained for...and succeed at it! The country, which was founded on solid Biblical and Christian principles, is still that way. Before the United States was ever dreamed of, God ordained a truth and a new beginning for those who love and obey Him and than those who are called by His Name.

The new beginning from God comes the moment we come to the end of our own little selves and realize that there is something and Someone bigger than us. It is when we realize we have hit bottom, lost all hope and have nowhere to go and turn to the One Who created us - Abba Father. God does not hear the prayers of those who are not saved, unless we called out to Him for Salvation and rescue. It is only then that we really and truly have a new beginning in life which will last us through eternity.

When we cry out, seek His forgiveness and accept that forgiveness in the spirit of repentance and accept Jesus Christ as our Lord and Master and the Direction of our life, only than will the God of Heaven hear our prayers. It is then the following becomes true: And I will give you a new heart, and a new spirit I will put within you. And I will remove the heart of stone from your flesh and give you a heart of flesh....Ezekiel 36:26

We read 2 Corinthians 5:17  says that if any man is in Christ, he is a "NEW CREATION". This is true. If you have ever observed a person, who led the most miserable life, looked and acted like a child of hell and then was radically saved, you will see the absolute complete change in that person. It is a confirmation of this verse!!

When the Bible says that person is a NEW CREATION, the actual original word for Creation is "ktisis". This is the very same word which is used to describe the Creation of the World, which God Himself formed out of NOTHING - NOTHING! God took our nothing and made something beautiful out it - a new creation. He creates a new person out of us, a child of the Kingdom, a royal priesthood, a holy nation! That's our God and that's the Truth! Jesus is Lord!

The following is a program on New Beginnings, from my Bible teaching show, which expands on this:
Posted by The Bernie Lutchman Blog at 8/17/2015