Can the soul of America get any darker? In an era of social media excess... cyber-bullying...teenage America seeking their 4 minutes of fame (via a viral YouTube video) come such real outrageous conduct involving our young people that one wonders how much longer God will put up with this! 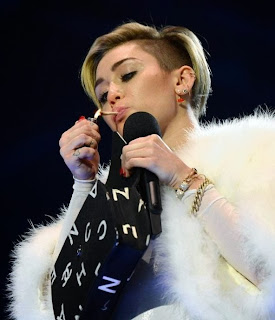 is not just satisfied to corrupt every youngster out there with her filthy lifestyle and antics, but this past weekend - right in front of the entire world, she lit up marijuana after performing a lewd act with a female dwarf.  God alone knows how many young people she introduced to this "gateway drug" by her infantile, illegal and immoral conduct. Not even Madonna did this kind of thing, in her own era of debauchery.

This kind of thing makes one wish that Miley's father was Keith Perry, the Pentecostal Preacher father of pop singer Katy Perry! Pastor Perry refused to remain silent about his own daughter's life style and asked for prayer for her back in May 2013! When is Billy Ray going to "man up" and do something? As one who grew up in the Bible Belt, surely Cyrus remembers Ephesians 6:4 "And you, fathers, do not provoke your children to wrath, but bring them up in the training and admonition of the Lord"

ITEM 2: MIDDLE SCHOOL OUTRAGE IN OREGON
Corbett Middle School football coach Randy Burbach was fired for promising to take this team of 12-14 year old boys to a Hooters "restaurant" at Jantzen Beach near Portland, Oregon. Coach was fired by the school after his plans were made public and some families complained. Still, he went through with this incredible plan last Saturday night (November 9); rented a huge stretch limo and took most of the Middle School team of gawking young boys to the restaurant. Hooters footed the bill and ended up donating $1000 to the high school booster club and 20% of the sales.

The unrepentant coach, not only defended this "party" but used it to promote some twisted philosophy of "playing under pressure" and "stand up for one's belief"! It used to be that Coaches taught young men the value of respecting women; honor and integrity. But I guess those things are now considered too Christian and old-fashioned for America in the 21st Century.

This coach and others like him, if they could recognize what a Bible looks like, would do well to look into this warning of the Supreme Court Chief Justice of the Universe (JESUS) when He said in Matthew 18:6 "but whoever causes one of these little ones who believe in Me to stumble, it would be better for him to have a heavy millstone hung around his neck, and to be drowned in the depth of the sea"!

ITEM 3: CHRISTIAN CHAPLAINS' PERSECUTED FOR JESUS' NAME!
In a year when the misleadingly named "MIlitary Religious Freedom Foundation" and its

president Mickey Weinstein are on a roll to usurp the constitutional religious freedoms of US Servicemen, Servicewomen and their chaplains, comes a new development which is heading straight for a showdown in the courts. Two Baptists chaplains have filed a major Federal lawsuit against the United States Veterans Affairs agency and its Secretary Eric Shinseki.

Navy Chaplain Lt. Dan Klender and Retired Army Chaplain Steven Firtko were in the VA's Clinical Pastoral Education Center Training program from VA Chaplains (a one year program) when they were "allegedly" victimized by the trainer, who is a VA employee herself - Nancy Dietsch.

According to reports, Ms. Dietsch has a history of anti-evangelical attitudes and was very critical of Christians.  Even worse, she told these long time chaplains that they were not allowed to PRAY IN THE NAME OF JESUS! Then during a classroom discussion on Faith, she also told the evangelical chaplains they were NOT allowed to quote the Bible. At a session a year ago, Dietsch also angrily pounded her fist on the desk when someone mentioned the Lord's Prayer, demanding they not quote Scripture. This was one of many incidents in the Federal Lawsuit against Dietsch, Shinseki and the VA for Religious Discrimination.
Chaplain Firtko was kicked out of the Training Program and Chaplain Klender withdrew under the intense harassment. These are just the latest in a string of anti-Christian actions in the Military which the US Congress has brought to the attention of those at the top of the Pentagon. These brave men of God should be encouraged because our own Lord and Savior, Whom we all serve had this to say in John 15:18-25 - 18 “If the world hates you, you know that it hated Me before it hated you. 19 If you were of the world, the world would love its own. Yet because you are not of the world, but I chose you out of the world, therefore the world hates you.20 Remember the word that I said to you, ‘A servant is not greater than his master.’ If they persecuted Me, they will also persecute you. If they kept My word, they will keep yours also.

21 But all these things they will do to you for My name’s sake, because they do not know Him who sent Me. 22 If I had not come and spoken to them, they would have no sin, but now they have no excuse for their sin. 23 He who hates Me hates My Father also. 24 If I had not done among them the works which no one else did, they would have no sin; but now they have seen and also hated both Me and My Father.
25 But this happened that the word might be fulfilled which is written in their law, ‘They hated Me without a cause."