BEN-HUR (1959) Winner of 11 Academy Awards
CURRENT REMAKE IN THE WORKS AT MGM! 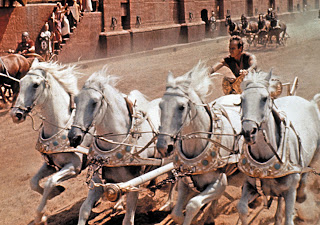 Before anyone think it is strange that I would be reviewing a movie that has been around for almost 54 years, check this! MGM, the makers of this version of BEN HUR is in the process of raising the capital for a massive remake of the Lew Wallace book, which spurred this classic epic into existence! This monthly movie review feature aims for cutting edge commentary which never conforms to current cultural configurations. Therefore, for this wonderful month, we look at an action packed thriller set around the time of Jesus Christ: BEN-HUR!

Union Civil War General Lew Wallace wrote and released Ben Hur: A Tale of the Christ in 1880 and it is still called the most influential book of the 19th century.  Including 1959, there have been four movies made on this book and the upcoming MGM remake will be number 5! Wallace's story revolves around Judah Ben-Hur, a wealthy Jewish nobleman (played by Charlton Heston) in the Jerusalem of AD 26. Judah was childhood friends with the Roman Messala (Stephen Boyd) who has now Roman military elite! Rome had conquered Judea at this time and ruled Jerusalem with an iron fist causing conflict between these two long time friends. Due to some evil shenanigans by Messala against his long time, now ex-friend, Ben-Hur is taken prisoner by Rome and sentenced to the Roman ships as a galley slave.

On the way to the ships, Ben-Hur and a group of slaves stop in a town called Nazareth, dying of thirst. Local natives start giving the slave gang water out of gourds, but the brutal Roman guard are under orders not to give any water to the parched Ben-Hur....that is, until a local Carpenter shows up! This is AD 26 and the Carpenter, Whose face is never seen, stands His ground in giving water to Ben-Hur, even when the Roman prison guard threatens Him! The look on the Roman guard when the Carpenter turns around and looks at the guard, while giving Ben-Hur more water is priceless. The audience knows by now that the Carpenter is Jesus. It is a great object lesson of evil shrinking away under the Powerful Stare of the Creator! 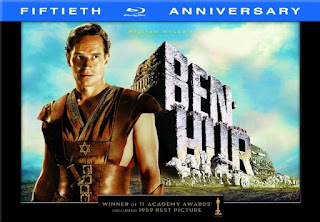 The long narrative sees our hero, Ben-Hur, still full of hate against Rome,  going through many personal trials and then victories when he is adopted by Arias the Roman consul (Jack Hawkins) after Ben-Hur prevents him from committing suicide. Life takes an amazing turn for him now as he returns to Jerusalem, having been a champion chariot racer, in his new station in life. The greatest chariot racing of any kind, in Hollywood movie history, then takes places in this Wilder's 1959 version of Ben Hur! It is 15 minutes long and breathtaking.

Apart from this excitement, the story really turns on Ben-Hur's new wife, Esther, who hears a man named Jesus Christ preaching "The Sermon on the Mount"! Hoping to cure her husband of his long time hatred of the Romans, Esther takes him to listen to the Messiah preach of love and forgiveness. He could hear but not see the speaker close up. After hearing Jesus, Ben-Hur rejects his favored adopted status as a great Roman charioteer and returns to his Jewish roots. He tried to take others to see Jesus, but the Christ's trial before Pontius Pilate is already going on and Ben-Hur is too late! As the Romans parade a badly beaten Jesus through the streets on the way to crucify Him, Ben-Hur finally recognizes Jesus as the Man Who gave him some water in Nazareth seven years before! He tries to return the favor to Jesus, but this time, the Roman guard has his way, and knocks the water away.

This is a beautiful movie of forgiveness and made for family viewing on the many cold long winter's nights as we have been having! Ben-Hur's famous line "I felt His Voice take the sword out of my hand" is a classic in redemption stories. The quality of Ben Hur was high definition, before HD was cool! It was restored and remmastered to be released for its 50th Anniversary in 2009, frame by gazillions of frames in this 222 minute long film! If you get the Blue Ray version or even the regular DVD or stream it live from Netflix or Amazon.com Prime, you won't be disappointed in this widescreen delight. The music score is classic as you would expect from a William Wilder movie and scored by the famed Hungarian composer Miklos Rozsa. Miklos is famous for other Academy winners like Spellbound (1945) and A Double Life (1947).

Be on the lookout for the sixth and amazingly technology to be introduced into the coming MGM remake of Ben-Hur! The script has already been written by Keith Clarke and will have a more focused protrayal of the adult life of Jesus, including the Crucifixion. Keith Clarke wrote the remarkably intense movie "The Way Back" and this new remake of Ben-Hur marks another in the sudden turn to religious epics in Hollywood! The History Channels' upcoming 10-part series called THE BIBLE, produced by Roma Downey (Touched by an Angel); Pontius Pilate (Warner Brothers): Moses (Spielberg) and the upcoming Noah, starring Russell Crowe, are surprising in this secular age when  Christians are under persecution everywhere!

Ben-Hur is recommended as the movie for such a time as this!

READ TWINAS LATINAS MAGAZINE FOR MORE ON MOVIE REVIEWS!
Posted by The Bernie Lutchman Blog at 2/03/2013