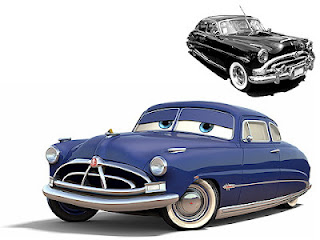 In the movie CARS, the HUDSON HORNET (or Doc Hudson..voiced by the late Paul Newman), is the most intriguing character. I use the word "character" loosely, as we're talking about a cartoon talking car!  But the storyline is engaging - the loving, dedicated town Doctor with a dusty past, who sticks around the small run-down town of Radiator Springs. It was not always so. Radiator Springs was thriving at one time, when the world famous Route 66 (aka "The Mother Road") was the only road to the west. But then along came the Interstate Highway system.

Just like in the Wild West of the late 1800's when the railroad promised to come through and entire towns thrived successfully in anticipation of this or that railroad going through it, Radiator Springs was eagerly anticipating Interstate 40. Alas, just like all those soon-to-be ghost towns of the west bypassed by most of the railroads, Springs' dreams were dashed.  Doc Hudson was a popular championship racer until a controversial crash took him out of the limelight. When he tried to return years later, there was no need for an old man like him, so they called him "washed out". Later on in the movie, Doc would use his love for others and Racing, to mentor the younger "Lightning McQueen" after seeing a lot of his younger self, in the hotshot young Lightning!

This how it should be for the people of God. If we had a past that was as good as it was bad, we all gained a wealth of knowledge and experience out of it ---- or we should have! Of course, some never learn ANYTHING!. What is important is what we do with that experience. Do we use it to become more successful by the world's standards, or do we follow God and see the eternal riches of the Heavenly Kingdom, which can only be found in Christ? The world will never understand us, our God and why we do what we do for things THEY cannot see! Trust me, if you are a son or daughter of God, born-again in Christ, YOU SEE the Kingdom!

Here is what the Bible says about material things "Do not love this world nor the things it offers you, for when you love the world, you do not have the love of the Father in you. (1 John 2:15 NLT) Every year, for years, we have the biggest Classic Car show in the Midwest here in Springfield, Il - the Route 66 Mother Road Show. Cars from all over the US, Canada and even the UK, spend hours in the most expensive parade in human history. Some of these extremely beautiful and well-cared-for autos can run over $50,000 per and cost twice as much to restore to that condition! There have been some cars from the early days of the "Horse-less" carriage that you only see in history books from 1903 and up! Amazing. I love to go and watch people around these cars. Some of these men (and they are mostly men) have almost empty blank looks about them and their entire being. I cannot escape the sinking feeling around them of two very important things - these classic car owners seemingly love their cars more than God Himself and maybe even their own wives! I have never seen so many eyes not alive with hope in Christ since the last St Patrick's Day parade, which is a really scary place (i.e. - handing out gospel tracts to a thousand plus drunks, boozing before noon, in front of pubs and bars, reeking of beer and bad breath....lost as lost can be).

Jesus said in Luke 11:11 (NLT) "You fathers--if your children ask for a fish, do you give them a snake instead?" Like Doc Hudson in the movie CARS, almost any man or father would give their best to their children and try to pass on the important (or what we thought are the significant) things in life. Most of us, who walk in the Light of Christ, make sure our kids are saved first and then are walking in the Light of the Lord. This is crucial in this dark and evil world.  Unfortunately, most men do not think this way, and seek to pass on just enough nuggets from their lives and instead strive to pass on more Gold and Silver nuggets than a Godly Legacy. Being around millions of dollars of '49 Mercurys or '57 Chevy BelAirs or '60 Cadillacs may be fun for about 4 minutes, but the priceless gift of Eternal Life cost nothing - except your loyalty and commitment to the one Who made you and I!

This is the thing worth considering as folks see our life savings and financial future become murkier, while America seems more taken up in useless toys like iPhone 5, iPads, video games, texting and eating out. It is high time to consider Christ, the Author and Perfector of our Faith, Who for the joy set before Him, endured a Cross....a brutal Cross and beatings and shame from fake religious leaders...so that some may enter the Eternal heavenly Kingdom. Are you one of those few elect, or are you one caught up in the shiny temporary objects of this dying world?

Think on these things.....life is shorter than we think!

Hello, All the videos are really inspiring me to get the new hope of life.I'm just search the info about mind academy who given us to opportunism to self certification.

Thanks, Michael...and the comment as well. I hope this all works out for you, sir! I am kind of a "life coach" myself as well as counselor of sorts! Have a nice weekend.