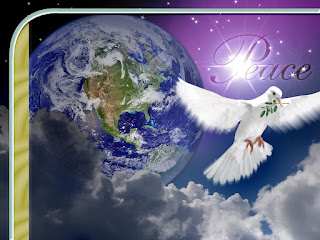 "After being baptized, Jesus came up immediately from the water; and behold, the heavens were opened, and he (John the Baptist) saw the Spirit of God descending as a dove and lighting on Him." (Matthew 3:16)

Right off the bat, in the very first 3:16 verse of the New Testament, the great Apostle Matthew (formerly Levi the tax collector), shows a powerful truth to the first Jewish Christian believers. It is something unheard of, except maybe in the ancient pages of the scrolls of Moses and the Prophets.

The scene itself is something directly out of a Divine Central Casting. God and God alone, is the only Creative Director of what is set to occur, as it reverberates through all history. The itinerant preaching cousin of the Messiah was fulfilling his God-ordained role of loudly proclaiming the need for repentance. He was baptizing those who repented and sought the forgiveness of the Lord. While standing in the Jordan River, up comes his cousin – Jesus.

By now, John the Baptist knew precisely who Jesus was, apart from being his cousin. John’s father, Zechariah the priest, prophesied in praise of Him, right before he spoke of his own son – John in his astonishing prayer/prophesy! Zechariah had just gotten back his voice after losing it, due to doubt about his aging wife being able told by God she was going to have a baby (John). God temporarily ordered him to lose his ability to speak, since he, a man of the cloth, doubted a true Angel of God. John knew the Messiah came from the same family as him, and he also knew His Divine Destiny. Jesus confirmed this later on (click).

John then uttered the immortal words “Behold the Lamb of God, Who takes away the sin of the World”. He then baptizes Jesus. The moment Jesus’s head come out of the water the Holy Spirit of God, Who IS God, descended through the open heavenly skies right upon the Messiah. This signaled the beginning of an amazing three years of ministry of the Christ. It was the three years which have forever changed the world.

While the world changed, in the general sense, because of the visible descent of the Holy Spirit in the form of a dove, this one significant event held the promise for any and everyone who would believe, thereafter,  in the Son of God and His Gospel.

The verse says “….and lighting upon Him”. In context, this means that the full power, influence, and authority of Heaven come upon Jesus and became one with His Spirit. He was (and always will be) fully God and fully man.  This means everything for all humanity. For Eternity past, the dearly departed souls who resided in what Jesus called “Abraham’s Bosom” or Paradise, had their Faith in God rewarded. The Messiah had come.

For the present, as in now, this would be the first of only two times which the Holy Spirit will be visible to the physical eye.  The Spirit of God, Who raised Christ from the dead, descended as tongues of fire on the disciples as they prayed and spoke in foreign languages so that all assembled in Jerusalem could understand what the Disciples were preaching.  That is is the accurate description of the “many tongues” they spoke.  The “tongues of fire” were only visible to the Elect of Christ in that room who saw the unique phenomenon, so that Christ’s Words from Acts 1 would be fulfilled.

Since there, the Holy Spirit immediately indwells and seals the truly saved. He is invisible to both the world and the Christian in whom He dwells. The fruits of the Spirit (peace, love, joy....) depends on the quality of faith and obedience of the Christian and should be evident over the course of a lifetime. There is a tremendous responsibility and debt which those whom Christ has saved and rescued owe Him. We owe Jesus not just everything but need to conduct ourselves accordingly.

Knowing the History of the Holy Spirit on this earth, from the descent at Christ’s baptism in the Jordan by John, and knowing His appearance as Tongues of Fire on Pentecost, what evidence of His appearance is there in YOUR life (and mine)? For your own good, and mine, let us proceed with the following practical steps towards our own sanctification.