THE 3:16 VERSES OF THE BIBLE: PART 23 "THE SECOND COMING, IT IS OVER- THE FULL BIBLE ACCOUNT OF THE END OF THE NATIONS" 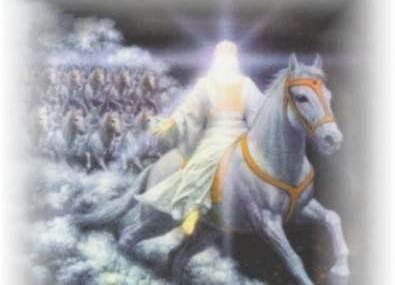 I heard and my inward parts trembled, at the sound my lips quivered. Decay enters my bones, and in my place I tremble. Because I must wait quietly for the day of distress, for the people to arise who will invade us. (Habakkuk 3:16)
We hear a lot in Christian circles, for centuries, if not almost 2000 years, about the Second Coming of the Risen Christ.  At His Ascension into Heaven, as recorded in Acts 1:9-11 , the Angel of God said the following: “9 And after He had said these things, He was lifted up while they were looking on, and a cloud received Him out of their sight. 10 And as they were gazing intently into the sky while He was going, behold, two men in white clothing stood beside them. 11 They also said, “Men of Galilee, why do you stand looking into the sky? This Jesus, who has been taken up from you into heaven, will come in just the same way as you have watched Him go into heaven.”

Since then, many movements, movies, books and preachers have delivered thousands of predictions about the Blessed Event, when the Savior returns to Earth to reclaim His Creation. There is a qualifier for this Blessed Event – it is only so for the Redeemed. These are the ones who have been saved by the Blood of the Lamb and have accepted Him as Lord and Master of their lives. For everyone else, it will not be a pleasant day!

We have all seen the End Times movies which precede the Second Coming of Christ. Revelation 19:11-16 describes the vivid scene of the Eastern skies cutting open on that fateful day when all the armies of heaven are released by the Father to be led into the final battle by the Commander in Chief of the Universe Himself – Jesus.

We get a vivid picture of what the actual Second Appearing looks like in detail. We read here (Revelation 19:11-16)
11 And I saw heaven opened, and behold, a white horse, and He who sat on it is called Faithful and True, and in righteousness He judges and wages war. 12 His eyes are a flame of fire, and on His head are many diadems; and He has a name written on Him which no one knows except Himself. 13 He is clothed with a robe dipped in blood, and His name is called The Word of God. 14 And the armies which are in heaven, clothed in fine linen, white and clean, were following Him on white horses. 15 From His mouth comes a sharp sword, so that with it He may strike down the nations, and He will rule them with a rod of iron; and He treads the wine press of the fierce wrath of God, the Almighty. 16 And on His robe and on His thigh He has a name written, “KING OF KINGS, AND LORD OF LORDS.”

This much is true:
A not so well known passage from Isaiah 63:1-6 provides and Interview between the Holy Spirit Who related the Scriptures from Heaven and Jesus, the Warrior King who is in the midst of just defeating the pagan nations of the world gathered against Him. There is no need to expound on the extent of the absolutely COMPLETE destructions of millions of military personnel from every army of the world and more.

Read this incredible interview here because outside of Scripture, no Christian believer in Christ will be around to see it:
GOD'S VENGEANCE ON THE NATIONS (POST-ARMAGEDDON INTERVIEW)
1 Who is this who comes from Edom,
With garments of glowing colors from Bozrah,
This One who is majestic in His apparel,
Marching in the greatness of His strength?
“It is I who speak in righteousness, mighty to save.”
2 Why is Your apparel red,
And Your garments like the one who treads in the wine press?
3 “I have trodden the wine trough alone,
And from the peoples there was no man with Me.
I also trod them in My anger
And trampled them in My wrath;
And their lifeblood is sprinkled on My garments,
And I stained all My raiment.
4 “For the day of vengeance was in My heart,
And My year of redemption has come.
5 “I looked, and there was no one to help,
And I was astonished and there was no one to uphold;
So My own arm brought salvation to Me,
And My wrath upheld Me.
6 “I trod down the peoples in My anger
And made them drunk in My wrath,
And I poured out their lifeblood on the earth.” (Isaiah 63:1-6)

In both passages here, we have the Arrival of the Commander in Chief for war with the Armies of Heaven, which contain men like King David and Joshua. The bookend above is almost like a post-battle interview. However, what Habakkuk 3 describes is the visual of the fearsome sight of the Second Coming of the King to put an end to this current madness and the reaction on earth! As far as I know, this is the only portion of prophetic Scripture which describes the atmospherics on earth when the Armies of Heaven descend from the Heavens to wipe out the remaining rebels on earth.

In plain language from via Habakkuk chapter 3:3-13, we read in stunned silence the following:
THE FINAL BATTLE OF HISTORY (LIVE)
3 God comes from Teman,
And the Holy One from Mount Paran. Selah.
His splendor covers the heavens,
And the earth is full of His praise.
4 His radiance is like the sunlight;
He has rays flashing from His hand,
And there is the hiding of His power.
5 Before Him goes pestilence,
And plague comes after Him.

9 Your bow was made bare,
The rods of chastisement were sworn. Selah.
You cleaved the earth with rivers.
10 The mountains saw You and quaked;
The downpour of waters swept by.
The deep uttered forth its voice,
It lifted high its hands.
11 Sun and moon stood in their places;
They went away at the light of Your arrows,
At the radiance of Your gleaming spear.
12 In indignation You marched through the earth;
In anger Youtrampled the nations.
13 You went forth for the salvation of Your people,
For the salvation of Your anointed.
You struck the head of the house of the evil
To lay him open from thigh to neck. Selah.

Then Habakkuk reacts shaking with fear at the terrible events, which he sees coming in the future (not to long from now), in verse 16:
“I heard and my inward parts trembled,
At the sound my lips quivered.
Decay enters my bones,
And in my place I tremble.
Because I must wait quietly for the day of distress,
For the people to arise who will invade us.

It would benefit many eternally to do the following:
Photo Credit Here)
Posted by The Bernie Lutchman Blog at 12/13/2017