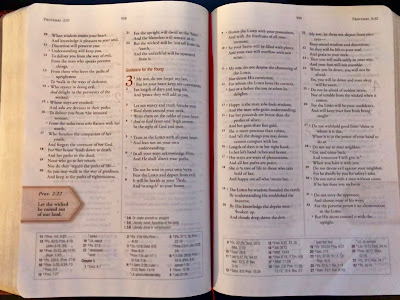 Long life is in her right hand; in her left hand are riches and honor. (Proverbs 3:16)


There is  a reason for leaving the final installment of the 3:16 verses of the Old Testament for last. In the preceding expository and meaningful studies of the 3:16 verses of the Great Prophets, we were deeply immersed in some very intense teachings. These Words which came directly from the Throne of God, via both the minor and major Old Testament prophets proclaim not just the current condition of humankind, but are pregnant with precise details of events which are either occurring right now, or will come when the gig is up (the End of Days).

Do not let this distinction between the so-called “Major and Minor” Prophets be an impediment. They are only called major because of the sheer volume of their work. Isaiah is a major prophet with an amazing work packed with 66 chapters! The so-called “minor” prophet Malachi only had four short chapters.  But an entire overview of God’s Rule, Sovereignty, Final Judgment and more can be found in two of those four chapters which Malachi wrote.  Isaiah is both historical and prophetic of events at the end of days. They all work together, for the Glory of God.

The key in comprehending; allowing the Holy Spirit to stir and convict our souls, and then applying God’s instructions so we may in complete alignment with Him, is Wisdom.

This is what Proverbs 3:16 teaches us at the end of all that has preceded in the 25 part-series on the Old Testament.  True Godly wisdom is the caveat for the woman or man of God to not just hear and know what He is saying, in these last days, but to track with His thinking. Wisdom from God is a completely different entity than the wisdom of the world. The twain shall never meet.

What the World calls “Wisdom” is actually secular knowledge. Acquiring more and more degrees, diplomas and certification – from  the IT fields to business to whatever, will bring prosperity and good living in the temporal (this life). But the true Wisdom of the Lord brings so much more.

Adam and Eve bought the lies of the serpent and saw the Forbidden Tree, which God had specifically put off limits, as Eve noted in Genesis 3:6 (“….when the woman saw that the tree was good for food…..and a tree desirable to make one wise, she took the fruit and ate”.  Eating the forbidden fruit of this corrupt world, without the accompanying Godly wisdom and discernment is the final recipe for Spiritual Death and disaster.


Proverbs 3:16 is a statement of fact perfectly placed in the very center of instruction from the Lord, on being wise by His standards.  To know what this verse means, we look at Scripture explaining Scripture.

James 1:5 says that "if ANYONE lacks wisdom, let him ASK of God” (Emphasis mine). However, listen to what the leader of the first ever Church in Jerusalem, and half brother of the Lord Jesus also said in the very next verse (6a): "But he must ask in faith without any doubting".  The Lord said through James- ASK IN FAITH.

We know from John 9:31 that ""We know that God does not hear sinners; but if anyone is God-fearing and does His will, He hears him"

Therefore, from the Word of God, we know this fixed equation: to ask God for wisdom, we MUST have Faith in Him. This Faith only comes from knowing God, through Jesus Christ as Lord and Master of our lives. So knowing this, we can understand what Proverbs 3:16 is leading us to comprehend:

A. Long life is in her right hand.  In the Bible, the right hand is the more important or significant hand as it denotes power and favor. Jesus is said to be seated (in glory) on the "Right Hand" of God. Jesus Himself said in Matthew 22:44 about Himself, the following: "'THE LORD SAID TO MY LORD, "SIT AT MY RIGHT HAND, UNTIL I PUT YOUR ENEMIES BENEATH YOUR FEET "'? (which He quoted from Psalm 110:1).

So whether it is at the Right Hand of God, where Jesus the Messiah sits (so to speak) or the shot-gun rider on a western stage-coach, or the co-pilot on an airplane, or meet “so and so….my right-hand man” – we are talking important stuff! Here in Proverbs 3:16, Wisdom is the “her”, as in “her right hand”. For the first 15 verses, God instructs not just on the knowledge and benefits of being spiritually wise, but He implicitly tells us to be not “wise in our own eyes” (Proverbs 3:7).

There is danger for one who is wise in his/her own eyes. Bad choices based on self-created “wisdom” can lead to a horrible life, and one that is even shortened if illegal conduct like addictions, tax evasion or worse are involved. But the wisdom of God leads to a long productive life.

There is disaster for the person who “despises the chastening of the Lord” (Proverbs 3:11) because that means this person, (now in the majority these days) is telling God – “I don’t need You, I can do this myself”….or worse language than this.  The result of this is Romans 1:28  - God lets them go their own way. Even if they don’t drive off a literal cliff in this life, they already have gone off the edge and the pit of eternal destruction awaits them when they take their last breath. But the wisdom of God, allowing His discipline and guidance to correct our conduct and thinking, leads to a better life here and resting in His Shalom for an eternity.

This is the true meaning of the first part of Proverbs 3:16. Spiritual wisdom directs us to to trust and full obedience through His Written Word. This is the explicit guidance of the Holy Spirit which then leads to long life here and most importantly – Eternal life in the very Presence of God, where there are an infinite length of days!

B. In her (Wisdom) left hand riches and honor – When we think of a person of honor, from the Bible we have men like the Prophet Daniel. In modern Christian history, we have people like George Mueller who on his own, took care of 10,024 children at his orphanages during his lifetime. The 117 schools he started taught Christian education to 112, 000 children. Yet he only took a salary of the modern day equivalent of $10,291 (in today dollars) for his entire family and himself. He never fund-raised or begged for money like come churches and television preachers.  Still, none of the thousands in his care went cold, hungry or without clothes. Muller gave everything up and all he did was pray, and let God provide. In God’s Eyes, Muller’s example and his legacy are riches which will never fill an earthly treasury, but more important – matter tremendously in Heaven!

The incredible Prophet Daniel is well known for being thrown into a lion’s den by the Babylonian king who had not yet become a follower of the God of Daniel. The prophet received that unjust sentence because he refused to bow to Nebuchadnezzar’s wishes and eat meat that was sacrificed to pagan idols. What is amazing about Daniel, is not just his prophesies or his faithfulness and prayers to Almighty God. What stands out to us is the following statement by the Angel, who had come DIRECTLY from the Throne Room of God to declare the following personal commendation to a mortal man.

Here is the DIRECT Message sent by God and personally delivered to Daniel (CLICK HERE TO READ THE FULL CHAPTER 10):
11 He said to me, “O Daniel, man of high esteem, understand the words that I am about to tell you and stand upright, for I have now been sent to you.” And when he had spoken this word to me, I stood up trembling. 12 Then he said to me, “Do not be afraid, Daniel, for from the first day that you set your heart on understanding this and on humbling yourself before your God, your words were heard, and I have come in response to your words. (Daniel 10:11-12)

So here is what Godly wisdom, fueled by obedience and strong faith leads to (from Daniel 10:11-12):
Daniel got the highest honor ANYONE in the Bible could have DIRECTLY. God spoke to Moses, Abraham, Job and many others. But there was never a message like this. Daniel was held in high esteem in heaven, in both eternal riches and honor because his Godly Discernment and Wisdom resulted from actively pursuing God in prayer and no compromise with the pagan world.These are all gleaned from Daniel 10:12:
- Daniel set his heart on understanding (seeking God and His Wisdom through the Scriptures and prayer).
- Daniel was such a peaceful, humble man that he knew from whence cometh his strength. It came from God. He bowed at the Feet of the Throne where the Master abideth.
- Daniel prayed constantly. Because he sought wisdom. Because he, Daniel, was humble. When the words of Daniel, via his power prayers, reach heaven - God responded immediately and sent in the Cavalry!

Daniel's "left hand" ...joined with his right hand in prayer wisely prayed. God responded with eternal riches of high esteem in heaven and honor from the Throne. George Mueller sold all this possessions and lived on 300 British pounds (1800's) per year for his entire family. Mueller live his entire decades long life in ministry to countless thousands of children. Mueller's prayers were almost always immediately answered and thousands of orphans were clothed, fed, kept warm and instructed in the Lord.

These are all pure living examples of wise and humble heroes of the Christian faith. Today, these two recorded historical figures - Daniel and George Mueller - remain the highest of standards. But God is doing the same thing in places across His entire planet, which we will never hear of, until that Great Day of the Lord in Heaven, when all...and I mean ALL - will be revealed.

Long life and the love and respect of God Himself....these are the hallmarks of the truly spiritually wise man or woman who follows Jesus Christ. This is the cherry on top of an amazing walk through all "3:16" verses of the Old Testament.
Posted by The Bernie Lutchman Blog at 12/30/2017