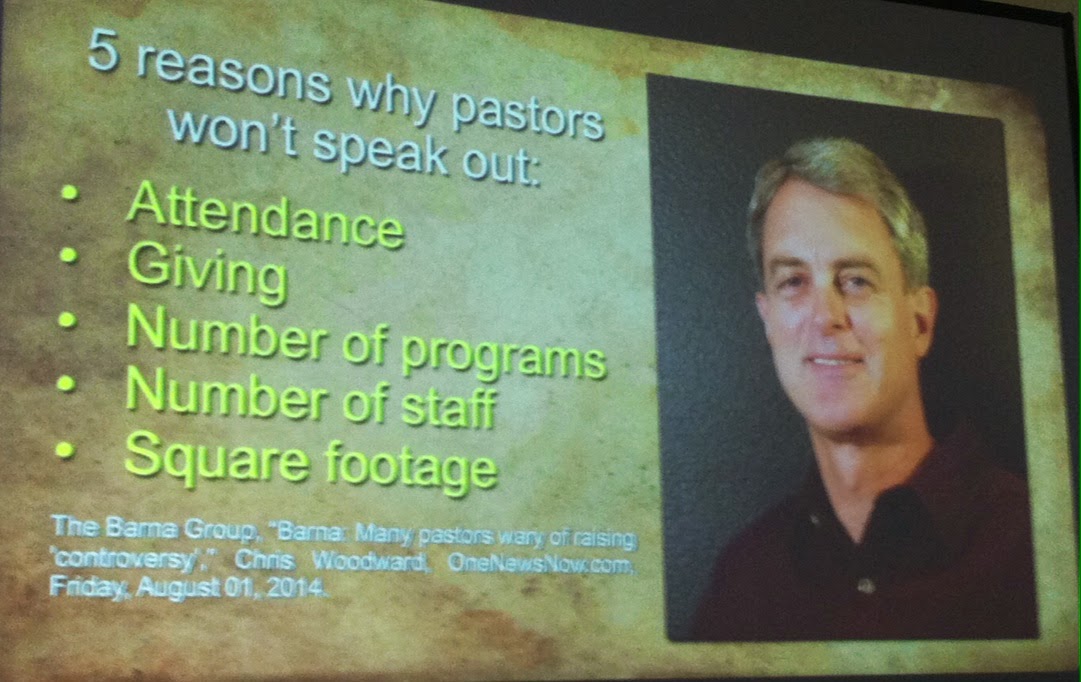 We laid out the theory, backed by allegorical evidence of the Ostrich Syndrome in the previous discussion of this self-inflicted malady afflicting the western church. (Click here to read THE SILENCE OF THE LAMBS). Well now we have definitive proof, and it is a lot worse than first thought.

Christian researcher George Barna spent two years to discover where self-proclaimed Biblically-sound American pastors and other church leaders were theologically, in practice. Specifically, the survey team wanted to know about the silence of the church on the great issues of our time. The results were shocking, absolutely absurd and horrifying for both these pastors personally on Judgment day and for the Body of Christ, general.

Here is what Barna said about these preachers, when he appeared on American Family Radio recently to discuss his findings on their "TODAY's ISSUES" program. This research was done on behalf of the American Culture and Faith Institute. George Barna said "What we're finding is that when we ask them about all the key issues of the day, [90 percent of them are] telling us, Yes, the Bible speaks to every one of these issues. Then we ask them: Well, are you teaching your people what the Bible says about those issues?--and the numbers drop...to less than 10 percent of pastors who say they will speak to it. When researchers ask those pastors what else they are willing to do to get their people active in the political process, Barna said ‘it's almost nothing.’ (Emphasis mine)

Did you catch that?! Less than 10% are even willing to preach what the Bible says about anything- morality, sin, marriage, raising children...what about that is offensive to these preachers?! Why are they even in the pulpit, frankly, is the question? They swear to represent the God of the Bible and who wrote the Scriptures, through men, but they are worse than King Asa, because these modern versions of Asa, know better, have tasted of the riches of Jesus Christ. Then Barna said the pastors are willing to do ALMOST NOTHING to get their people involved in "the political process". Now the "political process" is not about campaigning for candidates, but being aware of what politicians and their activists are doing, and how it relates to Biblical Christian living. That is all it is. It is about living what you say you believe. It is also about voting according to Biblical principles. Most Christian people do not realize God will hold them accountable for whom they vote! The mess in America today is due to Christians who voted for it, or did not participate. Here is another consequence of the survey findings.

Just look at that photo above for the evidence of why God's under-shepherd, America's pastors - from Osteen to Warren to Andy Stanley to...name them remain silent in the face of societal and global evil. To be sure, there are local pastors who are standing for the Truth and not just in their prayer meetings. In almost Dietrich Bonhoeffer-like boldness, the local Lutheran preacher but up a bold sign to pray for "Iraqi Christians", on a major route which sees thousands of cars drive by it, each day! Several of my preacher friends shout it from the pulpit top when they can and nationally, men like Franklin Graham, David Wilkerson's ministry and others are standing up for the Body of Christ, on the global level.

The latest Barna survey is horrifying on so many levels. George Barna did this survey over a period of two years, so it is not fly-by-night political poll. He put a lot of work and thought into this....and it is worse than we thought. Here are the TOP FIVE REASONS WHY AMERICAN PASTORS WOULD NOT SPEAK OUT AGAINST ANYTHING UNGODLY, ANYWHERE:
- ATTENDANCE
- GIVING
- NUMBER OF PROGRAMS
- NUMBER OF STAFF
- SQUARE FOOTAGE

While this sort of result was suspected for a while, it is stunning to see it confirmed with Barna's Survey numbers! Now the average attendance of the American church is not what we see or think we know - hundreds or even thousands. The average church in the US runs between 60-90 every Sunday! I am sure a lot of these smaller congregations still fall into the same trap as their medium and large church sisters who gave us this terrible confirmation.

A lot of the larger megachurches have become country clubs and would not speak out against sin, the culture or take a biblical stand on "gay marriage". They will speak out about partial- birth abortion or a pro-life issue on a Sunday, maybe once a year. But they will NOT go any further, being fearful of losing numbers to their "services". Even after Bill Hybels admitted that his and Rick Warren's "seeker-sensitive" movement was a miserable failure that failed to produce Disciples, America's megachurches are doubling-down on water-down "cultural Christianity".

You have a guy in Houston who refuses to preach on sin, because it is not cool or positive enough. You have the prosperity clowns with their private jets, multi-million dollar homes, multi-media empires etc. You have another preacher in Dallas appearing on stage with boats and expensive beds, along with his expensive foreign car, telling people "they are Ferrari"....and more and more of this garbage. On some TV network, there is spectacle called "PREACHERS OF LA", about five uber-rich prosperity gospel speakers and their typical southern California lifestyle, which is an absolute incredible piece of heresy.

So there is no wonder those people care more about attendance (and therefore the money attendees to their churches give). If they lose some of their "congregation", there go the money folks, and especially the rich ones....and how else are these guys and their trophy wives going to afford the $100 slim cut jeans, Starbucks daily and four or five bodyguards, on the way to the next pop psychology conference?

If anyone is wondering why there is no national religious (re: Christian) leader calling for Repentance, Return to Righteousness and Prayer for the Persecuted (except Franklin Graham and a couple others), just look at the five reasons all US pastors told Barna, in general. Judgment Day for them will be really interesting. What should concern the rest of us lowly folks is this - we should be very sure of our own actions. Let us not be caught up in that snare, but let us be resolved to do what we can, in our own small way. These people will answer for their massive sins of omission. In our own walk, we must be careful to pray, stay humble and to love others.

Our Agape Love should be so strong, that we care more about their eternal destiny than what they can do for us. Our Godly concern for the lost and hurting and hopeless should inspire us to reach out in unconditional caring and compassion. This is what the Word of God - our Bible - calls us to do and what our own Lord and Savior strongly desires. His Desire is our calling to action. Let's not just speak out in our own circles, but look up - pray up and stand up....stand up, for Jesus. Amen.
Posted by The Bernie Lutchman Blog at 9/01/2014