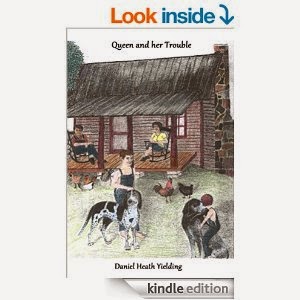 FROM THE HEART OF SWEET HOME ALABAMA - QUEEN AND HER TROUBLE
As America drifts further away from the God-created institutions which defined her greatness, every once in a while a gem comes out of the coal mine of post-modernism which just warms the heart, puts a smile on your face and inspire you to go have a group hug with your wife and kids! Such a gem is “QUEEN AND HER TROUBLE” – the first ever book written and published by a preacher from Shiloh, Alabama who is now pastoring a church about 530 miles northwest of his hometown, in Atteberry, Illinois.

Based on some of his true life experiences as a young boy growing up in rural Alabama in the 1970’s, Danny Heath Yielding’s  179 page book is fact-based story telling at its finest, simplest and full of authenticity.  Coming from the heart of a Pastor who uses the same technique as Jesus to communicate Truth,  this page-turner grabs you right off the get-go and never lets up. “Queen” is the kind of book which one can read and find yourself in the story, rooting for the underdog.

Danny Yielding’s main character in “Queen and her Trouble” is also named Danny, who is
an 11 year old growing up in the hard poverty-stricken towns of rural Alabama of 1955. Danny’s strong family is led by a good man of God, who owns the only General Store in their small town which is more like a credit agency which gives grace to all its customer, most of whom could never pay. The store is owned by a mean godless banker, who obviously wants to be paid his mortgage.  In the meantime the adventurous young Danny discovers the joy of raccoon hunting (or “coon hunting”) and develops a friendship with a stodgy old man named Banner, who is the sworn enemy of Danny’s grandfather. Of course, they became enemies over a girl, who chose Danny’s grandpa over Banner!

Over a period of time, Danny becomes obsessed with coon hunting and wants to have his own coon-hunting dogs, so Banner paid him to do odd jobs. One thing led to another as Danny’s selfless act to save the family store led to a reconciliation between the two lifelong enemies and Danny getting two fine young hunting puppies. The ensuing adventures of Danny’s molding and training these pups into hunting dogs were vividly described. Someone like me, a suburban cowboy, looks at raccoons differently than say, a country boy in West Monroe, Louisiana or Arab, Alabama. However I can relate to the earthy and downhome experience described by Author Yielding in his book,  since my own mother-in-law grew up in similar circumstances in the same era, in which this book was written – 1950’s Alabama. She grew up on a farm run by her dad, another tough God-fearing man and the atmospherics described in “Queen and her Trouble” are perfectly aligned with the kind of town where Danny and his parents lived.

What makes this book so fascinating, appealing and downright funny is the author himself.  Daniel Yielding is a colorful forty-something preacher from Alabama whose own boyhood experiences are interwoven with those of 11 year old Danny in the story and his dog Queen. The dog who ends up winning the State wide Coon Hunt, down in Birmingham is named Trouble. Pastor Danny’s dog in real life was named Trouble and was quite the handful as Trouble was in the book, from what he told me.

Without giving away the storyline, let’s just say that a surprise turn of events for both the family (in an almost tragic way) and the blessings of God, for those who live right and persevere through trials, tribulations and even near tragedies, are the hallmark and underpinnings of this wonderful book.  For a person who reads and sometimes reviews good books for a wide spectrum of authors, I would classify the feel of “QUEEN AND HER TROUBLE” as one with a Huck Finn/Tom Sawyer meets Duck Dynasty sort of tale,  except it is based, in part, on the real life of one man set  in one of our favorite parts of the country, where Faith, Family and Fellowship still reign supreme!

CLICK HERE TO VIEW PURCHASE OPTIONS FOR “QUEEN AND HER TROUBLE” BY DANNY YIELDING
WATCH DANNY SHARE A MESSAGE RECENTLY: