How does a young woman born in Harvard, Massachusetts who graduates from Louisiana Technical University; then ends up as dancer for the NBA’s San Antonio Spurs and bikini girl for Amazon.com’s Kindle Paperweight end up as the producer for the biggest Christian movie in a decade? Answer - dedication, talent and sticking to truth! 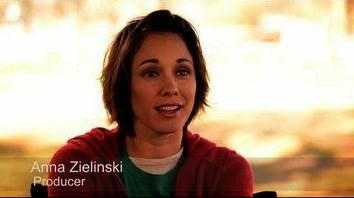 Forty year old Anna Zielinksi has stepped huge into the limelight as producer of the surprise movie and Faith-based hit “GOD’s NOT DEAD”, which has taken the Christian world by storm. God's Not Dead has eclipsed all the Hollywood hype over Paramount's Epic Film "NOAH" which is now out in theaters. Not much is said of Anna Zielinski at this time, but her growth from NBA San Antonio (Texas) Spurs cheerleader to trying her hand at acting has lead her on a curiously wonderful journey. This journey has produced an increasingly well put together body of work in Christian Film Production Company PURE FLIX, which keeps improving constantly.

Secular audiences may know Anna from "How I met Your Mother" and several other roles. She has been active on stage and other solid roles, including the terrific End Times action-packed drama JERUSALEM COUNTDOWN. Zielinski first broke into the Christian Movie genre with a movie called Marriage Retreat, which had a personal connection to her own life. Since that time, her portfolio has become stunningly successful.

What impressed me the most was her movie - DANIEL (Pure Flix 2013), which is based accurately on the great Old Testament prophet who impacted not just the Babylonian King, but the conquering Persians, down to the so-called "Wise Men" or magi of the Christmas story. Anna Zielinski's reasoning for this fantastic portrayal of the gentle prophet of God, Daniel, is in marked contrast to the recent vitriol and controversy surrounding those who made a big budget epic on the Great Flood. From her post-Daniel interview, it was obvious from whom the Godly leadership to make this gem emanated.
She has also recently produced a heart-warming romance, which you can actually allow your kids to see, called FINDING NORMAL (Pure Flix 2014) which stars Candace Cameron Bure (Kirk Cameron's sister).  This was her last offering before the blockbuster GOD's NOT DEAD which will one day soon, make Anna Zielinski, of Mexican and Phillipino heritage, the Premier Woman Movie Producer of not just Christian movies, but quality blockbuster film!
Posted by The Bernie Lutchman Blog at 3/29/2014