GOD'S NOT DEAD - MAN'S PHILOSOPHY IS! 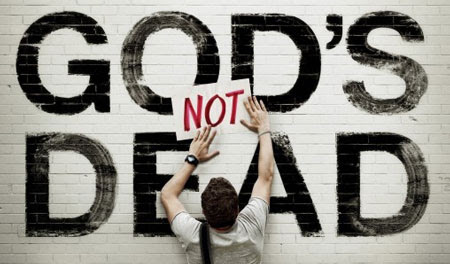 The surprise hit movie of 2014 is not the coming big budget NOAH movie from Hollywood, but the offering from some wonderful folks at PURE FLIX and actor Kevin Sorbo. Their sleeper hit "GOD'S NOT DEAD" surprised the mainstream movie industry when it opened in only 780 screens across America on Friday March 21 and ended up at number 4 in the Box Office that weekend! The average Hollywood production launches in 3000 or more screens (just as a gauge).

What makes this movie the potential blockbuster not seen since 2004's Passion of the Christ is quality production combined with inspired solid professional writing. The main story revolves around a freshman Christian student Josh Wheaton who finds himself in a Philosophy class run by the vitriolic atheist Professor Radisson (played by the popular actor Kevin Sorbo). Radisson begins his class by telling all 80 plus students that they must disavow God, write on a piece of paper that "GOD IS DEAD" and sign their name to it. Josh is a Christian and comes face to face with this Faith or what his cultural "christian" (and soon to be ex-) girlfriend calls "his future".  As the only student in his class to refuse to go against his belief, Radisson immediately dislikes Josh Wheaton, yet gives him 20 minutes over three classes to prove the existence of God. This leads to several sub-plots which make this one of the best movies I have ever seen.
Before getting to those, as a personal point of privilege, I must recount my only encounter with Philosophy in college in the early 1980's when it was one of my electives at Acadia University. Watching Professor Radisson in this movie made me harken back to the absolute hogwash man made philosophy really is.  It was not clear why I dropped out of Philosophy class after one day until I got older and more mature in Faith. Some of the same dead atheists listed in that movie - from Albert Camus to Descartes were some of the people I studied in my teens, before God blocked out all of that atheism and saved me completely in 1988. I have since seen, up close, the kind of arrogance and absolute evil present on the modern campus which is turning the majority of young people against God and their own salvation in chance meetings with men and women like Radisson, in real life.

The reality of the sheer slipping away from the Faith of some from our own youth groups was never more evident than Josh Wheaton's girlfriend in GOD'S NOT DEAD, who pressures him to sign "the stupid" paper and be done with it. The thought that kept coming to my mind, as I watched student after student sign their name to their scribbled (and forced) God is Dead, is that this thing is real! These kids represent the millions of many others doing the same all over North America and Europe and meaning it - to their eternal regret one day.
The film also has a serious glimpse of what happens to any person who is saved out of islam into the liberating spiritual freedom, which Jesus Christ provides.  The testimonies of several former moslems whom Christ redeemed are full of the same violence we see used against "Ayisha" (Hadeel Sittu) in the movie by her islamic father, who throws her literally out of the house when he discovers she has become a Christian. Humor also is a big part of making this 112 minute movie so dynamic, fast-moving and inspiring. We all know that the God Who created a sense of humor, also uses circumstances to line up and lead up toward the outcome He has in mind. In the movie, God's timing is perfect as He uses some humorous situations to lead to the ultimate salvation of the Kevin Sorbo character, moments away from his sudden death in a hit and run accident.

There are several other relationship interactions which are all too prevalent in this corrupt dog-eat-dog world. We get to glimpse the cold pursuit of the good life which people give everything to get (including walking over others and ultimately their souls and more). We see the interplay between a Communist Chinese official and his searching son, who eventually gets saved. We also see the well known NEWSBOYS, a group to whose music I was first introduced in 1996 in a small water park here in Illinois. I had never before seen long-haired Australians banging out heavy metal and calling it Christian music. Fast forward 17 years and I am in the dressing room with them at the pre-concert dinner hanging out as they prepare to go on stage to preview a trailer for some movie called GOD's NOT DEAD and sing their hit song of the same title from years ago!

Apart from being the best movie I have seen in movie theaters in years, it is also the best production from PURE FLIX, a Christian movie group with which several of us Christian ministers have a relationship as part of our ministry. The movie is a MUST for ALL YOUTH GROUPS and especially any teen who is about to go to college in the Fall. God's Not Dead will give any such teen the courage and a sample of the methods he/she can and must use to defend our Faith in God, through Christ our Lord and Savior.
GOD'S NOT DEAD - THE PHILOSOPHY OF MEN IS!