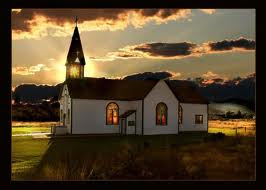 Many so-called Christians or even the real Children of God – the “ekklesia” (or the Body of Christ) miss out on SO MUCH! In fact WE JUST DON’T KNOW!!
We don’t know the Power of His Might.
We don’t know the Power of His Creation.
We don’t know the Presence of His Power (think about that for a second!)
We don’t know the Possibility of His Promise!
And why don’t we?
Why are we PEW-OCCUPIED but not wholly SANCTIFIED?
Why is a fat lazy nation BUT NOT a HOLY NATION?
Why do we have the most immaculate neighborhood but don’t act like a ROYAL PRIESTHOOD?
I’ll tell you why – we’ve been seduced by the god of this world and do not even know it!  “What?? How dare you, an untrained and uneducated (I’m a seminary dropout – PRAISE GOD!!) street evangelist says that about our beautiful church buildings and pastors? Don’t you see we have the best carpets comforts, cafeterias and chandeliers?  Can’t you see we are full every Sunday, baptize regularly and have the best youth groups in town?
“Sure they text during the sermon, but that’s the latest evangelism tool!!!”…..
First of all, I (Bernie Lutchman) did not say any of this! Read the entire New Testament and then camp of Revelation chapters 2 and 3 to see what the HEAD OF THE CHURCH – the Living Word of God – JESUS says about our churches in America and the west…..and you say “well that was 2000 years ago!!” No! A thousand times NO!  That word from King Jesus was for the church for all time and apart from some weird cults and personality driven churches, almost every modern evangelical church in America lives in Laodicea!
What does this mean? Here is what Jesus Himself said in Revelation 3:17 “You say, ‘I am rich; I have acquired wealth and do not need a thing.’ But you do not realize that you are wretched, pitiful, poor, blind and naked”.
The first order of business after reading this admonition from Christ is to search our hearts and let the Lord reveal our own shortcomings, so we can go about trying to fix them!!
There are many books and articles which can be written about the state of the modern church, but what I feel a burden for after a prayer meeting last evening, was the state of the modern church HEART!
PROPHETIC PASSAGE!