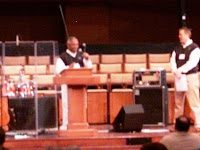 NATIONAL DAY OF PRAYER TASK FORCE AT IRON SHARPENS IRON MEN'S CONFERENCE
SPRINGFIELD, ILLINOIS - MARCH 1, 2008
Springfield, Illinois hosted the 2nd Annual National Men's conference - www.ironsharpensiron.net - hosted by Relevant Practical Ministry for Men. This is a new ministry based in Williamsville, Il. and headed by Business Men In Christ president Thomas Cheshire.
This is the first year that the National Day of Prayer Task Force joined all 37 ISI Nationwide conferences as a national sponsor. NDP (www.ndptf.org) is based in Colorado Springs and this outreached is headed up by NDP Vice Chairman Brian Toon.
I was blessed to ask to represent us at NDP, as the local Illinois State Capitol Coordinator based in all of Sangamon County, Illinois. This included speaking on twice during the assembly at Conference and introducing the official NDP videos of our 2008 National Chairman Ravi Zacharias and our Election 2008 promos.
NDP will next be represented at the ISI Rockford Conference on March 8 by Pastor Stan Pratt of Way of Life Church, Taylorville, Il. I will be at the ISI Moline Conference on April 19.