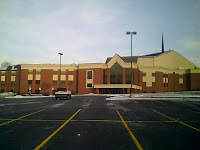 TRI STATE SOLEMN ASSEMBLY SATURDAY FEBRUARY 23, 2008
FIRST EVANGELICAL FREE CHURCH
MANCHESTER, MISSOURI
Several folks have asked me about the Midwest Prayer Solemn Assembly put on by our National Day of Prayer Task Force here in Kansas, Missouri and Illinois. There seems to be a bit of an inquiry about what a 'Solemn Assembly' actually is, and why the Special Forces of the National Prayer Movement would get together for one! So in this summary, I would hopefully shed some light and briefly try to illustrate why this is all so critical - for such a time as this!
The first thing to note is that Solemn Assembly is Biblical. Here are Biblical foundations for it: 2 Chronicles 7: 13-15, Isaiah 58,Psalm 68: 6-10, Jeremiah 3: 2-5, Micah 6: 8, Haggai 1: 2-14 and Malachi 4: 1-6. In Joel 2:15 NASB, God told the prophet: "Blow a trumpet in Zion, consecrate a fast, proclaim a solemn assembly".
Therefore, here is the definition of a Solemn Assembly - it is a summoning of God's people ALONE specifically to confess any known sins and to restore a right relationship between God and His people. What happens during a solemn assembly are times of serious reflection, brokenness, humility and a sense of awe before God. It is most definitely THE occasion for God's people to be still; to be open to the Spirit and to obey when He speaks to us through His Word and our hearts. We MUST confess individually and together where we have missed the mark (the definition of Sin) and then renew our covenant with God on our knees - with our brethren as witnesses. I do not know how to define it any better than this.
For the second time in three weeks, the Lord has led me to a Solemn Assembly! Both times, I was asked to participate to my shock and surprise. In Springfield, Il on Saturday Feb 2, 2008, the Springfield Ministerial Alliance and International House of Prayer Director Pastor Scott Beauchamp held a Solemn Assembly at the historic First Presbyterian Church on 7th Street. The Lincoln Family pew is still in the narthex, roped off and in good shape after 140 plus years!
I was asked to lead on Corporate Repentance and chose Hosea 6: 1-3 before prayer. The Springfield, Il. event was particularly amazing as it is part of a commemoration of the 1908 Race Riots here, which led to the formation of the NAACP. A large crowd showed up despite almost 11 inches of snow and nowhere to park on the streets! As a personal aside, I am astounded and blown away that the Lord, Hashem YHWH Almighty, would use somebody who looks and sounds like me.
I have been ask to minister in various ways, in four events in the past five weeks! And since a 'prophet' is without honor in his own country, only one of them has been in Springfield - the Feb 2 Solemn Assembly. The Lord has led me to Virden, Shiloh and then Manchester, Missouri this past Saturday. On April 19, I will also represent our national NDP Task Force at Iron Sharpens Iron in Moline, Illinois.
Which leads me to the Solemn Assembly in Missouri yesterday. First of all, thank you to Kathy Morgan who was tireless in preparation. Sue Stoltz, Tom Otley and my new friends at BOTT Radio KSVI FM there did an awesome job of promotion and prep as well!! AMEN! The Lord opened up that opportunity for me to be involved in two training workshops speaking on Spiritual Warfare, after another different turn of events in another ministry...on the same day.

We had a long talk about Joe White and his new Men at the Cross Ministry; about how Men's Fraternity affected our lives as Men's ministry leaders in Springfield etc etc. To my BMIC co-leader brethren, you may not realize it, but we are having an impact, as more and more want to know how we do what we do! AMEN! Of course, my title is director of communications....and God did not grant me a spirit of timidity when talking about BMIC!! Thank you for allowing me to share this wonderful occasion with you! God bless.
Posted by The Bernie Lutchman Blog at 2/25/2008