SONSHINE OUTREACH MINISTRIES THIRD ANNIVERSARY....and the best in-laws in the world too!! 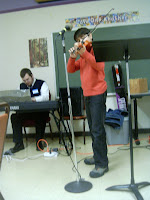 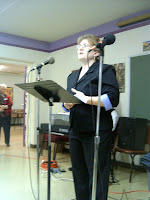 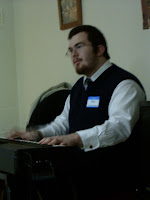 There is nothing more that a son-in-law could want than to belong to the best family in the world! When the Lord chose my wife Vicki for me, before the Foundation of the Earth, He knew He would be putting me in the most authentic, G0d-loving and evangelizing family in America!! 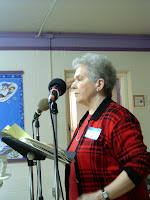 This past weekend was a great example, as a ministry started by my wife's parents - Joyce and Verlin Mancke, with their two close friends Ben and Betty Tan, celebrated an amazing three years!
It began with four people wanting to bring Christ and some sun (SON)shine into the lives of the most neglected of our people - those left to die in the Nursing Homes of America (for one reason or another). What began with just the four of them at the Salem Village Senior center in Joliet, has exploded into a fullfledge, authentic organized ministry with the Hand of the Lord guiding all the way.
Now called Sonshine Outreach Ministries (www.sonshineoutreach.blogspot.com ), the group is now complete with full audio equipment to go with their now dozens of volunteers from nine churches and their own resident Gospel singing group - the Alive Quartet!! They have a different nursing home to minister at EVERY single week of the year, with more waiting in the wings. The local South Suburban Chicago press has written two glowing articles at how the Lord has moved in this ministry just three years.

So it was a blessing for the Morgans (Vicki's sister Sheryl seen in black in photo above and her EXTREMELY talented son Brian, the music minister at First Baptist, Redbud, Il.) and the Lutchmans to be a part of this amazing thanksgiving for these wonderful years. Sheryl gave a wonderful testimony about her blessed Missions trip to Africa; Vicki and I sang after I led a session of corporate prayer and Sam played a powerful hymn with Brian, who can make the electric keyboard sound better than anyone I know....playing by ear!
Praise God in His Sanctuary! Praise Him and He continues to save many at these homes, just before He calls them hom! Praise Him for the best in-laws in the World!! AMEN!!
ps...Vicki's mom...looks just like her! Obviously!! :>)
Posted by The Bernie Lutchman Blog at 1/21/2008

That is awesome! These type of ministry activities are perhaps the biggest downfall to living in Louisville and not back home.

I am Pastor Peter Rai from nepal. south asia.

i read your website. it is great encouragement for me. wonderfull , great job. wow.

dear sir i would lke to invite you in my country and visit me.

your minstry is very important for my people and places.
in the contants of nepal your minstry is must needed.
what do you think?
please pray for to come your whole family/.

we are welcome you very much.

thank you very much