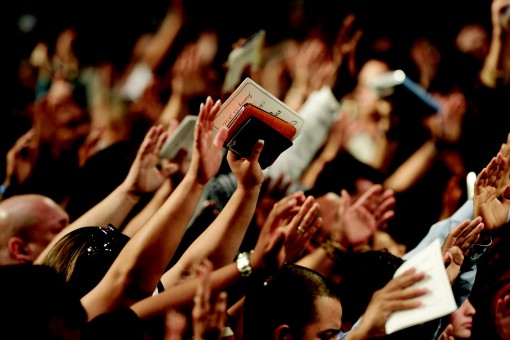 When we think of the term "Unconditional Surrender", the image of Defeat comes to mind. When a nation is vanquished in war, as Japan was in 1945, the Emperor had to surrender without conditions to the United States of America. The terms of post-surrender are different from the actual act of giving up all weapons and rights to aggressive action. During World War II, for the guarantee of peace, the Japanese had to give up every aspect of any militaristic aggression. It was dropping all weapons PLUS.....a lot of current and future actions.

In the Spiritual Realm, which is not just important in the long run, but now, for life as a Christian. This is not just for adult men and women, but for every young person who is born again, even at the youngest age.  Absolute surrender to the Holy Spirit and the Will of God for us is imperative for the Fullness of the Lord Jesus Christ to work in us.

The question that we, who live surrounded by Cultural Christianity, must ask - if Jesus were to knock on the door of our souls, would He have access to every part, every nook and cranny, every compartment and every aspect of our lives? Are we the Fake News of Christians, living under the dignity and privilege of having the "Title of Christian" but being a practical atheist like the majority of people in this country, hemisphere or the world? Many who claim Faith in the God of Heaven do a really good job of walling off the most significant parts of their lives from the very Same God Who can deliver from all death, distress and despair.

This kind of life is NOT what the Lord expects of His people. Motivational speakers posing as preachers present us a false picture, Sunday after Sunday on television, books, seminars, all over this country. None of that would first, get a person into heaven and secondly, even if a person is saved, help them to grow into the Christian, whom Christ would be able to say one day "well done, good and faithful servant".

The individualistic nature of the western is not the main reason why Christians, who enjoy the fruits of modern life, are afraid to acknowledge Jesus Christ as Lord. It basically the selfish nature of all humankind, who thinks more highly of self than anything else. Then, we note that the main goal of churches, pastors, altar calls, evangelists etc. is for those, to whom they preach, to accept Jesus as Savior....and HE IS YOUR SAVIOR AND MINE.

Therefore, here, for as long as it takes, we begin the process of a REAL COMMITMENT to Jesus Christ and the Holy Spirit, item by item, a few at a time, so that the Spirit can begin to clean us up now. We do all of this not in our own power, but through His.

BE AWARE THIS CANNOT BE DONE OVERNIGHT ALL AT ONCE. BUT IF THE PROCESS IS NOT STARTED NOW, CHRISTIAN - YOU WILL LIVE IN DEFEAT AND DISAPPOINTMENT ALL THE DAYS OF YOUR LIFE, ABSENT OF COMPLETE PEACE, JOY AND CONTENTMENT.

COMPARTMENT #1 OF MY LIFE TO SURRENDER TO GOD NOW:
-  Every aspect of my Faith Walk. This is of supreme importance.

It matters not that a person goes to a "Bible-preaching church". It matters if the correct exposition of the literal Scriptures are presented in an orderly and simple manner, reflecting the fact that the preacher actually studied what he is teaching.

To surrender every aspect of my Faith Walk with Christ, I will have to be VERY careful of the following, seeking the Lord for absolute discernment and wisdom in choosing:

-  What translation of the Bible should I use? If your church is using the New International Version (NIV) or NLT (New Living Translation) or other paraphrase as the main text and even if the preacher is spot on, the Lord will expect us to NOT follow them but instead get a real literal and comprehensive Study Bible which is closer to the original text than the aforementioned paraphrases. The most literal, Word for Word translation of the Word of God is the New American Standard Bible (click).  The most fluent AND literal is the English Standard Version (ESV) and the Christian Standard Bible (CSB). There is absolutely nothing wrong with the King James Version (KJV) or the NKJV. Beware of preachers and teachers who use the Message Bible as their primary text. This may seem like a little thing, but the Word of God is the Plumb Line against which ALL humanity will be judge and the Lord is serious about it. Do NOT compromise on your own understanding and reading of the accurate Word of God, because another mortal human being, a preacher or teacher, reads from a weak version of Scripture. This is one thing we MUST give over to the Lord for His direction, so we can be Faithful to His True Word.

-  What kind of music are we listening to? It goes without saying, that we should not listen to death metal, gangsta rap that degrades women and glorifies violence or songs that promote immorality. Some of the so-called Christian Contemporary music around though, may sound good, but do not mention Jesus, or  even imply Him. Not all people are inclined to listen to hymnal music or Keith Green from the 1980's (a Christian musician). Here is  good place to surrender our lives to the Lord, in the music we listen to. There was some good clean secular music in the 1970's and 80's. Does it mean that a Christian cannot go to a Doobie Brothers' or Chicago concert? No, but do so in the knowledge that a concert is all it is and we are just as accountable to pray for the souls of those talented musicians as ever. Alice Cooper, who popularized outlandish (and scary) costumes in his concerts over 40 years, is a good example. He still plays his old music but as the born-again son of an Arizona preacher, his message is completely different on stage, according to those who have seen his act to whom I have spoken. Also, Alice Cooper (real name Vince Furnier) can be seen without his scary pancake makeup, in a local baptist church, every Sunday in the town where he has a concert, every time. At home in Arizona, he and his faithful wife of 43 years, are members of the Camelback Bible Church.

These are two important parts of the Christian's Worship Life which MUST be under the full authority of God. There is no option or Plan B. The Word of God is too important to be treated with disrespect as is done today, in even good churches where the Bible is not carried into the building by congregants. Even if every church in town does not turn off the main reading of the Scriptures from the television screen, you and I....we walk with our Bibles. People will say the following "we have the Bible on our phones".  This is nice. However, most never open the Bible App and read.

Music has become significantly more important - even more so than prayer - in today's worship service. However, surrendering the nature of the music, the lyrics and the reaction to it, reflects the heart of the worshiper in us. The classic hymns will never go away. While they have been replaced by the modern worship song in the majority of modern churches in the West and Australia, the hymns with which we grew up, remain standard among the majority of Christians in the world (in the Third World and other persecuted lands). These hymns are the story of Jesus and are full of theology. None of us have control over the songs played in church, for the most part. We do have control over the next 99 % of our daily life, in our homes, cars and  offices. Let us then choose and select that which will considered appropriate, if Jesus Christ were sitting in the car with us (which He is)!