THE MOST BEAUTIFUL FLOWER EVENT IN THE WORLD - THE CEREUS 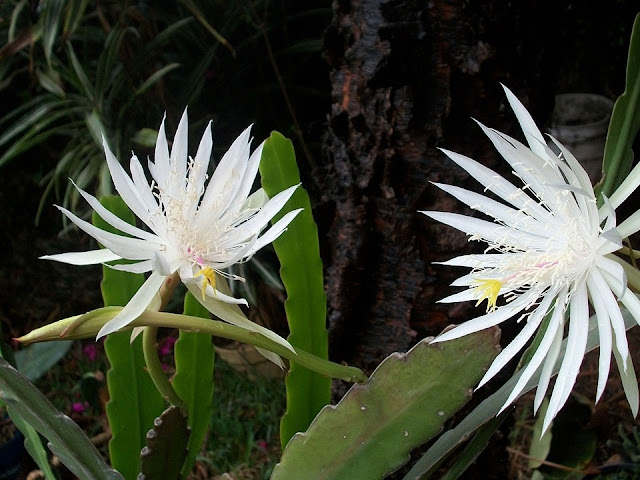 There is a unique member of the cactus plant which looks like any other desert cactus. It is so nondescript that no one notices it....and why should they? This cactus is so indicative of the incredible Mind and Hand of God that any definition cannot do it justice.

It is called the Night-Blooming Cereus (seen here). This cactus flower only blooms once a year. It blooms once, on a random night in either June or July and then, at nightfall. It remains until just before dawn, when the cereus wilts and is done. It is such a beautiful, sweet-smelling fragrant flower, it has names which point to majesty and beauty. Some of the other names for this flower are "Christ in the Manger", "Princess of the Night", "Honolulu Queen" or "Dama de Noche" (Queen of the Night). Perfumers have even tried to recreate this in the lab as seen here. The official name of the night-blooming cereus is Selenicereus grandiflorus

The night-blooming cereus is found mainly in the south-western United States deserts of West Texas, Sonoran and Chihuahuan deserts of southern Arizona and parts of northern Mexico. Apart from the amazing fact of the one-time annual nightly bloom, is the size the stem can get up to. The stem can run from between four to eight inches in length, in those few night hours, before it goes by dawn the next day.

This is an absolutely amazing natural phenomenon which only the outstanding, unfathomable Mind of Creator God could come up with.  The desert Cereus testifies to the wonder of the Divine Who is always working, but Who is always unique in His design.  He Himself describes the characteristics of some of His masterpieces. Read what He says about the ostrich in Job
Whether is the humorous ostrich; the fearsome leviathan reptile; the dangerous Orak or the stunningly fragrant and temporary bloom on the Cereus, nothing approaches His masterwork –  you and I. He Who made the Heavens and the earth; the stars and galaxies yet unknown, has called us to Himself as a people in the greatest plan of redemption ever known to mankind.
It is this, through the Lord Jesus Christ, through Whom He has achieved this perfect plan, yet still unfolding.  The Ancient of Days allowed His One of a kind (only begotten) Son to step off the Throne of Heaven one time. He did not consider equality with the Father a thing to be held on to, until His knuckles turned white. He poured Himself into a human body and still did not descend from Heaven with trumpets blaring, driving a golden chariot. Man-made Hollywood movie studios and heads of earthy governments would do that, not God Himself. Instead, Yahweh God, the One Who lives forever, lowered Himself to be born in a cave where animals were kept.
He had no fancy baby crib from Macy’s with fresh new clothes from the well-attended baby shower, but he was wrapped in poor strips of cloth and placed in a feed trough. Instead of royal attendants and hundreds of servants, He was visited by men who were branded as outcasts from the all-important Temple in Jerusalem and by the elite of that city. Yet the baby lambs and sheep they raised in their many flocks on Shepherds Field in Bethlehem, were the same animals used for the required sacrificed in pre-Crucifixion Jerusalem Temple worship of Yahweh. These outcast men, some of whom were not of the best character, were chosen by God to have the huge Heavenly hosts of Angels appear to, in order to announce the birth of Jesus in one of their caves!
Like the sweet-smelling Cereus cactus flower which only appears once a year in the middle of the night, the sweet Savior of the World appears to the depressed and deserted on the rocky, hard-scrabble Shepherds Fields where only loneliness and toil prevail.. The sweet Savior only came once, paid for all sin for all time - ONCE. He then died, was buried and was resurrected - ONCE. There is nothing sweeter than this.
Psalm 8 comes to mind, because it contains the Words from the Holy Spirit through King David. David marvels at the God Who would create a mostly unseen unique gem of a flower like the Cereus, yet announce the greatest event in History – to poor, disgruntled, depressed and discarded shepherds. These shepherds – “poimenes” (or pastor) in the Original Language of the New Testament.
As we contemplate the power and wonders of our Great God and Creator, as seen here in Psalm 8, may it challenge us to take the beauty and divine fragrance of the Pure Gospel of Truth and Love to as many as we can in our brief lives. May it not just remain unseen, like the beautiful Cereus, in the desert. But may more than too many, see us, our actions and our words, and want to know Him, Whom the great classic song calls “The Lily of the Valley” – the “Rose of Sharon” – that Lord Jesus Christ Himself. Amen. Jesus is our Lord. He is our Creator. He is God in the flesh. He is our Savior.

Psalm 8 - The Glory of the Lord in Creation

1  O Lord, our Lord, How excellent is Your name in all the earth, Who have set Your glory above the heavens!

2    Out of the mouth of babes and nursing infants You have ordained strength, because of Your enemies, that You may silence the enemy and the avenger.

3    When I consider Your heavens, the work of Your fingers, the moon and the stars, which You have ordained,

5    For You have made him a little lower than the angels, and You have crowned him with glory and honor.

6   You have made him to have dominion over the works of Your hands; You have put all things under his feet,

7   All sheep and oxen— even the beasts of the field,

8   The birds of the air, and the fish of the sea that pass through the paths of the seas.

9   O Lord, our Lord, how excellent is Your name in all the earth!