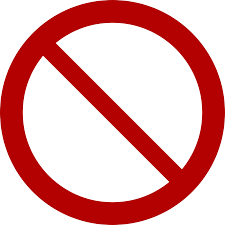 OPENING LYRICS TO "FLIRTING WITH DISASTER":

I'm travelin' down the road
I'm flirtin' with disaster
I've got the pedal to the floor,
My life is running faster
I'm out of money, I'm out of hope,
It looks like self destruction
Well how much more can we take,
With all of this corruption

We're flirtin' with disaster,
Ya'll know what I mean
And the way we run our lives,
It makes no sense to me
I don't know about yourself or what you want to be, yeah
When we gamble with our time,
We choose our destiny  (Molly Hatchet 1979 Writers: Brown, Hlubek)
It is a terrible thing to try the patience of the Lord. We humans do it all the time, including those of us who not only know better, but serve Him in a mighty way.  This propensity to sin, with which we were born, will always with us until we pass on to Glory at the end of our natural life on earth.

That being said, there comes a point in our spiritual maturity when we do not do the things we used to do….just because. How many times have we made a deal with God that “if You get me out of this one, I will never…..(fill in the blanks)”.  Those kinds of promises are extremely impossible to keep. That is why the bible tells us to NOT make oaths like these.

For the normal person, God’s grace is sufficient. He forgives our sins and removes them from us, as far as the east is from the west. For a church leader, pastor or priest, the standard is ten times higher!!  There is not just a higher level of conduct expected but a ministry leader’s respect and reverence for God has to be as close to perfect as humanly possible.

There is something in the background story behind 1 Samuel 3:16 which should give us pause, especially with anyone who thinks “flirtin with disaster “makes life more interesting.  Eli was the priest of the nation Israel and had a tremendous spiritual mantle/burden/responsibility to carry.  Samuel was still a boy, yet because the Lord had pre-ordained him, he became Eli’s understudy.

Eli had two sons – Hophni and Phinehas, who were also priests in the Lord’s Tabernacle and were supposed to conduct themselves, according to the requirements of their office. But they were both evil and corrupt men who not just violated God’s laws openly but flaunted their corruption.

Under Jewish law, all priests serving  in the temple were provided for by God. They were fed, clothed and supplied by the tithes and offerings of Almighty God. The Lord was their Provider. But Hophni and Phinehas, instead of allowing the sacrifice to be offered to the Lord first – as any sane person knows, had their henchmen accost those approaching the altar with their sacrifice. The priestly hoodlums, I mean helpers, would then grab more than their share of the choicest portion of the Sacrificial Animals BEFORE it was offered to God! They cut off the prime cuts first and gave the meat to Eli’s sons.

These men not only stole the prime cuts of meat for their own families but these two “priests” had illicit and immoral relations with young women in the temple, in broad daylight, right in the open…. IN THE TEMPLE OF GOD! God Himself warned His high priest Eli about his sons’ conduct, but Eli refused to do anything about it.  Not just that but it appears that Eli himself was eating ill-gotten meat because the bible says when he fell over and died in his 90’s he was a very fat man! In those days, not many people were fat, far less a minister of God. Potlucks were not invented in church  yet.

The Lord finally had enough and determined to not only take Hophni and Phinehas out of the picture, but not just these two evil men who called were literal Levite priests. God also decided to remove their father Eli from the land of the living.

Here is where we come to 1 Samuel 3:16 where the message for the young boy, who would become the greatest prophet/Judge of Israel – came loud and clear from God.  The Lord had given Eli endless warnings and upbraiding about his wicked sons, but he ignored God on purpose and never listened to the Lord.

This is the direct message from God Himself for the young Samuel from 1 Samuel 3: "11 Then the LORD said to Samuel, “Behold, I am about to do a thing in Israel at which the two ears of everyone who hears it will tingle. 12 On that day I will fulfill against Eli all that I have spoken concerning his house, from beginning to end. 13 And I declare to him that I am about to punish his house forever, for the iniquity that he knew, because his sons were blaspheming God, and he did not restrain them. 14 Therefore I swear to the house of Eli that the iniquity of Eli's house shall not be atoned for by sacrifice or offering forever.”

There are several things God’s people should learn from this and it is IMPERATIVE you and I take this to heart:
-  When God speaks, we had better listen. He still speaks audibly to the hearts and souls of His people through His Spirit. For the most part, He speaks through His Word.

-  When God speaks and warns us of sin of both omission and commission, we will be wise to address that sin as soon as possible. Many maturing Christians know it is better to keep short accounts both with God and man. This means we do not let the sun go down on our sin or the devil will magnify it until we are sunk in the mire and wallowing in dirt and despair. Do not be like the rest of the world and modern western “Christianity”.

-  God will not put up with continuing blatant sin from those who claim to work for Him. This sin which flaunts its perversion and causes others to disparage God will be judged and judged harshly. His Holy Name is more than important to Him because He is the Holy One of Israel. The task for us today is to be constantly aware we carry His Cross on more than our sleeves. He bear His Mark to a lost and dying world. If we are the only Bible that people read, we had better make sure our character is not related to the official misconduct of some of our great Bible heroes. There are enough fallen preachers in the world today, who have caused the name and ministry of Christ to be scoffed at by the world. Let us not be the ones, who are indulge in – Flirtin’ with Disaster!
Posted by The Bernie Lutchman Blog at 9/10/2017